Our previous Core Vocab discussion centered on alēthēs (adjective) ‘true, true things’; alētheia (noun) ‘truth’, and we had considered how this word can also be thought of as “being not mentally disconnected.”[1]

So this month we will consider another ‘disconnected’ word: nēpios, plural nēpioi. In the Core Vocab, the definition is given as “‘disconnected’ (the disconnection can be mental, moral, or emotional).”[2]

In this first example of the word, the psūkhē of Patroklos is speaking:

…we were brought up together in your own home, [85] back when I, still a boy, was brought from Opous by [my father] Menoitios. He brought me to your place because of a disastrous [lugrē] homicide. It happened on the day when I killed the son of Amphidamas. It was involuntary. I was feeling disconnected [nēpios]. I got angry during a game of dice. But then [your father] the charioteer Peleus received me in his home, [90] and he raised me in a ritually correct way, naming me to be your attendant [therapōn].
(Iliad 23. 84–90, Sourcebook[3])

Here I notice the contrast between the polluting act of homicide, and the “ritually correct” way Patroklos was raised. And by becoming a therapōn, Patroklos becomes deeply connected with Achilles.

The next example occurs in a passage from the start of Odyssey: 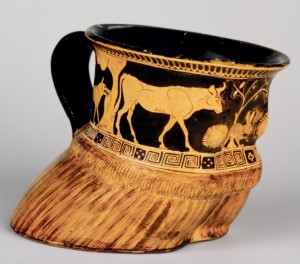 |1 That man, tell me O Muse the song of that man, that versatile [polu-tropos] man, who in very many ways |2 veered from his path and wandered off far and wide, after he had destroyed the sacred citadel of Troy. |3 Many different cities of many different people did he see, getting to know different ways of thinking [noos]. |4 Many were the pains [algea] he suffered in his heart [thūmos] while crossing the sea |5 struggling to merit [arnusthai] the saving of his own life [psūkhē] and his own homecoming [nostos] as well as the homecoming of his comrades [hetairoi]. |6 But do what he might he could not save his comrades [hetairoi], even though he very much wanted to. |7 For they perished through their own deeds of sheer recklessness, |8 disconnected [nēpioi] as they were, because of what they did to the cattle of the sun-god Hēlios. |9 They ate them. So the god [Hēlios] deprived them of their day of homecoming [nostimon].
(Odyssey 1. 1–9, Sourcebook)

When we look at the part of the narrative when they arrive at the island, Odysseus makes the men swear an oath not to kill any of the cattle or sheep:

‘…each one of you must take his solemn oath that if he meet with a herd of cattle or a large flock of sheep, [300] he will not be so mad as to kill a single head of either, but will be satisfied with the food that immortal Circe has given us.’ They all swore as I bade them…
(Odyssey 12. 298–303, Sourcebook)

Stuck there with their food having run out, Odysseus goes up to the mountain to pray, and falls asleep, while Eurylokhos decides he would rather risk the sun-god’s anger even if it means being drowned at sea—so the men kill the cattle and perform an improvised sacrifice (12. 325–365). I wonder if this sleep, which Odysseus describes as an “aberration [atē]” (12.372), signals a way in which Odysseus and the men have become disconnected from each other, or whether the men have been disconnected from their oath when they broke it, or whether it is also the incorrect ritual—oak leaves, in the absence of barley meal, and water instead of wine (12. 358 and 362–3)—that signifies or exemplifies an aspect of their disconnectedness.

In Oedipus Tyrannos, the Chorus begs Oedipus not to kill or banish Creon.

Iocasta
In the name of the gods, believe it, Oedipus; first have respect [aidōs] for this oath of the gods, then for me, and for these men who stand before you.

Chorus
Consent, have phrenes, listen, my lord. I beg you.

Oedipus
650 What would you have me grant you?

Chorus
Respect him who was in the past not inept [nēpios], and who now is strong in his oath.
(Sophocles Oedipus Tyrannos 646–651, Sourcebook)

Here, there seems to be a connection with keeping an oath and not being nēpios.

So now I invite members of Hour 25 to join me in the forum to find other examples of this word to help us understand the meaning and use of this word in context.

By way of illustration, I have chosen images of individuals seemingly alone in the landscape; a picture of fool’s gold, iron pyrites; and a terracotta cup in the shape of a cow’s hoof.

How would you choose to illustrate the word?

[1] For example in footnote 2 to the Hesiodic Theogony in the Sourcebook, Prof. Nagy says “The pan-Hellenic nature of Hesiodic poetry is conveyed by the absolutist concept of alēthēs/alētheia ‘true/truth’ [‘what is not subject to forgetting or mental disconnection’, as expressed by lēth – ‘forget, be mentally disconnected’].”

Evgeni Dinev: View of the city of Sliven, GNU Free Documentation License
Jonathan Zander: Pyrite Fool’s Gold, Wikimedia Commons, Creative Commons 2.0 Licence.
Terracota cup: cow’s hoof, Metropolitan Museum of Art>, Fletcher Fund, OASC. For another view of the cup, see here.
___
Sarah Scott is a technical author who lives in Scotland. She has taken part in all four iterations of HeroesX, being one of the Community TAs in v2–v4, and has a lifelong love of language, literature, and learning.