In Eumenides we see Athena changing the old system of vendetta, personified by the Furies or Erinyes, to that of a justice system and trial by jury[3]. The Furies complain (twice):

Younger gods, you have ridden down the ancient laws [nomoi] and snatched them from my hands! 780 And I, wretched, deeply angry, and without tīmē in this land, alas, I will let venom fly from my heart, venom that brings sorrow [penthos] in return for penthos, drops of venom that the land cannot endure. 785 A blight will come from the venom that destroys leaves and destroys children, a blight that speeds over the plain and casts pollution on the land to destroy mortals. O dikē, dikē! I groan. What shall I do? I am the laughing-stock of the citizens. 790 I have suffered [paskhein] unbearably. Ah, unfortunate daughters of Night, you have the sorrow [penthos] of a great blight on your tīmē!

Gregory Nagy explains that “there are exponents of justice who are worshipped as cult heroes in individual city-states. Some of these heroes are viewed as lawgivers or quasi-lawgivers.” (H24H 13§40), and gives Solon of Athens as one such example. 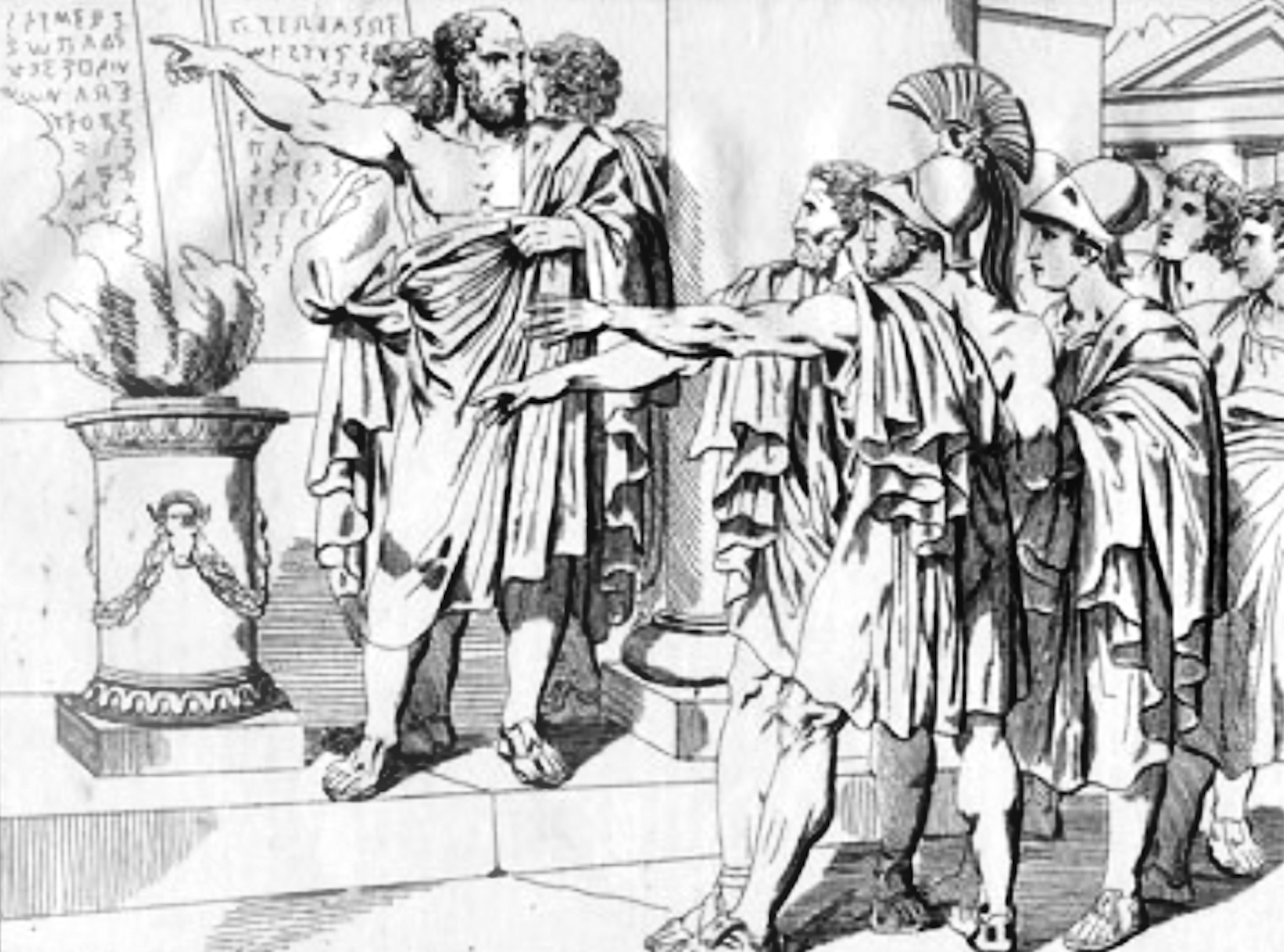 He was spending ten years abroad after having made laws [nomoi] for the Athenians at their request. He sailed away on the pretext of taking a sacred voyage [theōriā], but the real reason was not to have to repeal any of the laws [nomoi] he had made. The Athenians could not do this on their own, having sworn by the strongest oaths to observe for ten years whatever laws [nomoi] Solon gave them.

So by aetiologizing Solon as a lawgiver, we see perhaps a change in meaning for nomos from the sense of “custom” and  “customary law” through to the modern sense of “law”. 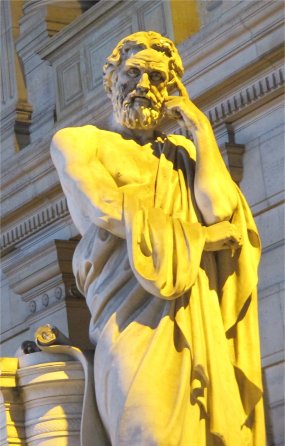 It was not just Athenians: Xenophon tells the story of how Lycurgus encouraged the Spartans to adopt his laws:

Among many excellent plans contrived by Lycurgus for encouraging willing obedience to the laws [nomoi] among the citizens, I think one of the most excellent was this: before delivering his laws [nomoi] to the people he paid a visit to Delphi, accompanied by the most important citizens, and inquired of the god whether it was desirable and better for Sparta that she should obey the laws [nomoi] that he himself had framed. Only when the god answered that it was better in every way did he deliver them, after enacting that to refuse obedience to laws [nomoi] given by the Pythian god was not only unlawful [anomon], but wicked.

Xenophon Constitution of the Lacedaimonians 8, adapted from translation by E.C. Marchant and G.W. Bowersock[4]

The laws are thus associated with something sanctioned by or even given by the god.

Aristophanes gives us a satirical view of one of the customs of Hades (no doubt a reflection on various customs and attitudes of Athenian citizens):

There is a custom [nomos] established here,
in all the great and noble arts
that the best man in his own field of talent
gets his meals in the Town Hall,
and the seat next to Pluto…

Again, there is a connection with a god.

The Hesiodic Theogony introduces the Muses who sing the nomoi of the immortal gods:

The father was Zeus, son of Kronos. Their mother, who mated with him, was Mnemosyne [Memory], who rules over the heights of Eleuther. … 60 she [Mnemosyne] gave birth to nine daughters, all like-minded, who have song on their minds, in their breast. They have a thūmos without worries. There they are, poised to descend from the topmost peak of snowy Olympus. That is where they have their bright dancing-places and their beautiful abodes. … And they [the Muses], sending forth a lovely voice, sing and make kleos for the norms [nomoi] and accustomed ways of all the immortals, as they send forth a lovely voice.

So is this referring to the customs that the gods themselves follow, or to those customs given by the immortals to humans?

The LSJ[6] dictionary tells us that nomos can also mean “melody, strain” and can refer “especially a type of early melody created by Terpander for the lyre as an accompaniment to Epic texts.”

The word is used in this musical sense by Herodotus, in this amazing story of Arion: 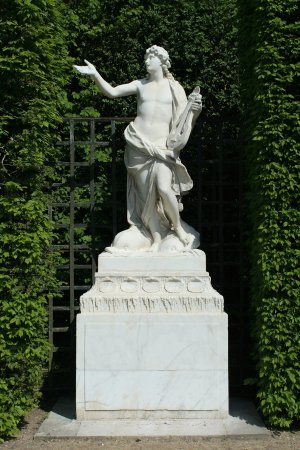 They say that Arion of Methymna was carried ashore at Tainaron on a dolphin. He was a singer second to none in his time, and he is the first man we know of to compose the dithyramb  and name it and teach it in Corinth. They say that this Arion, who spent the greater part of his time with Periander, desired to sail to Italy and Sicily on a tour, and after making a lot of money wished to come back to Corinth. He set out from Tarentum, hiring a ship of Corinthian men since he trusted no one more than the Corinthians. But in the open sea they plotted to throw Arion overboard and take his money. He comprehended the plot and pleaded with them, offering to surrender his money and begging for his life [psūkhē]. But he did not persuade them, and the sailors ordered him either to kill himself so that he could meet with burial on land, or to jump into the sea immediately. He was left helpless by these threats and begged them, since they had so decided, to allow him to stand on deck in full dress and sing. He promised to kill himself after singing. They were pleased at the prospect of hearing the best [aristos] singer in the world, so they withdrew from the stern to the middle of the ship. He put on his outfit and took up his lyre, stood on the deck and repeated the ‘shrill’ song [nomos]. When the song [nomos] was complete [= brought to telos], he threw himself into the sea just as he was, full dress and all, and the men sailed off to Corinth. But they say a dolphin took him on its back and carried him ashore at Tainaron. He climbed off and went to Corinth, still in his outfit, and upon arriving related everything that had happened. Periander in disbelief kept him under guard without release and waited intently for the sailors. After they arrived, they were summoned and questioned whether they had any news of Arion. When they said he was safe in Italy and they had left him doing fine in Tarentum, Arion appeared to them just as he was when he jumped overboard.

The notes by How & Wells[8] for this passage explains further that “It [= the ‘shrill’ nomos] was attributed to Terpander and especially used in the worship of Apollo. Arion’s song was an act of worship; it is this religious element in the story that commends it to H. [= Herodotus]. The ὄρθιος νόμος was in solemn and measured rhythm.”

So how does this sense relate to the more usual meanings of “law, customary law, custom”? The Brill Dictionary[9] shows, there is an extended sense “norm of an art, rule, prescription,” so maybe it relates to that: what do you think? Are there other examples of nomos used in the musical sense that can help us understand the connection between the meanings?

Pindar uses the word in what seems to be three different senses:

We shall further praise his noble [esthlos] brothers, because [70] they exalt and strengthen the traditional laws [nomos] of the Thessalians; the good [agathos] piloting of states, handed from father to son, rests in the hands of noble men.

The most beautiful chorus [khoros] of Muses sang gladly for the Aeacids on Mt. Pelion, and among them Apollo, sweeping the seven-tongued lyre [phorminx] with a golden plectrum, [25] led all types of strains [nomoi].

Deep-thinking Cheiron reared Jason under his stone roof, and later Asclepius, [55] whom he taught the gentle-handed laws [nomos] of remedies [pharmaka].

But there may be more overlap than first meets the eye. In the Pythian 10 passage, these laws could be in the legal sense, and indeed the note by Gildersleeve[11] for this verse says nomos here refers to the state.

The wording suggests that good leadership and direction, bound up with the transmission through the generations in an idealized picture of Thessaly, could also mean that nomos has that sense of “custom, customary law.”

In the Nemean 5 passage we see again the word used in connection with music, as the Theogony and Herodotus texts above. 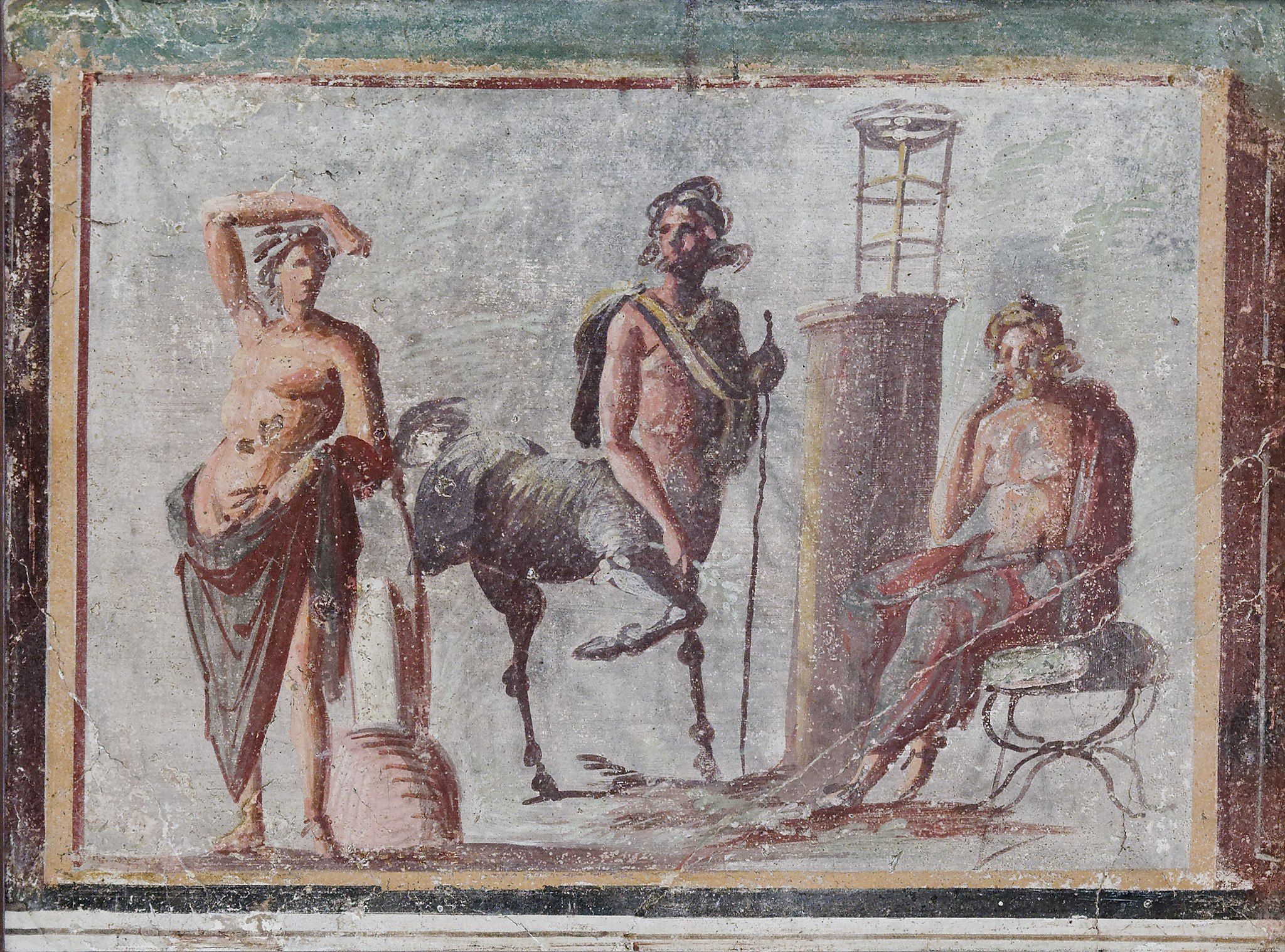 Finally in Nemean 3, the “laws of remedies” could refer to traditions or customs; or the laws of nature and what remedy is most applicable to what ailment. In another ode, Pythian 3, Pindar provides another story involving Cheiron and the healing arts as transmitted to Asklepios, who healed people: “he released and delivered all of them from their different pains, tending some of them with gentle incantations, others with soothing potions, or by wrapping remedies all around their limbs, and others he set right with surgery.” (Pindar Pythian 3.51–53). So here perhaps we have a clue about a link between music and custom and natural laws.

The term nomos does not appear in Homeric epic: for “law” we are more likely to find dikē ( ‘judgment (short-range); justice (long-range)’ or themis (‘something divinely ordained or cosmically ordained; cosmic law’).

Are there other terms in ancient Greek texts that seem to be used to convey the senses of nomos? What words most often collocate with nomos?

I invite members to join me in the Forum to share further examples of the word in a variety of contexts so we can further explore how it was used and understood.