In this latest post featuring Core Vocabulary from The Ancient Greek Hero in 24 Hours[1] (H24H) and the associated Sourcebook[2] and our other primary texts, there are two related terms: paskhein [πάσχειν] ‘suffer, experience, be treated [badly or well]’; and pathos [πάθος] ‘suffering, experience’. 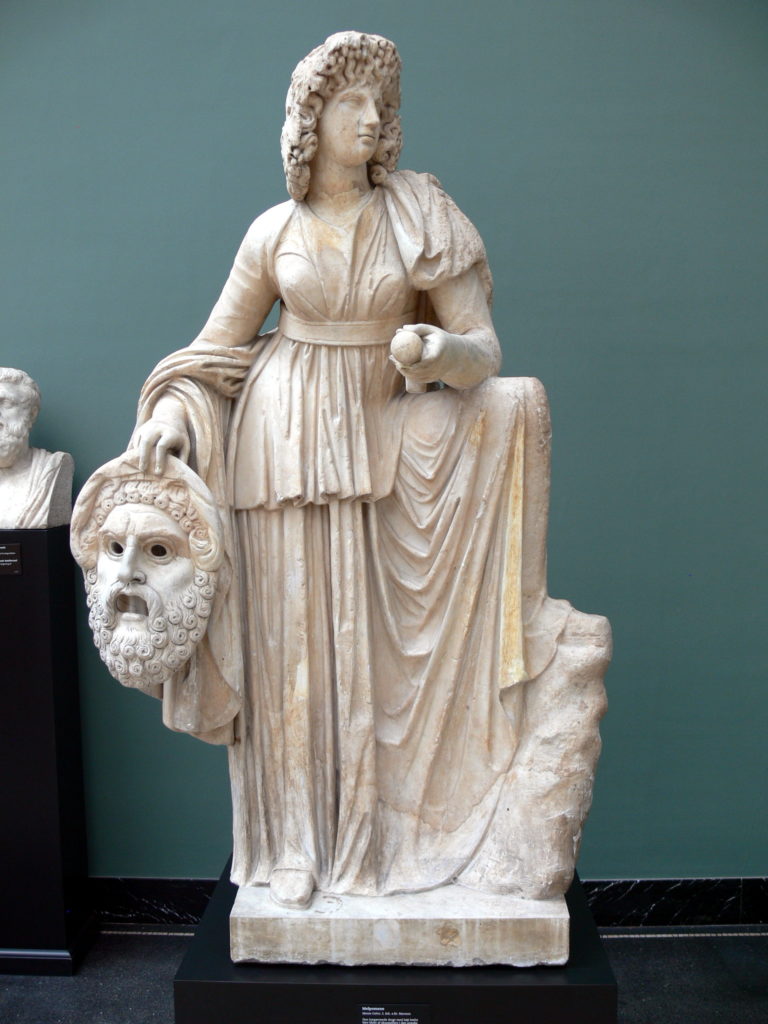 When it comes to tragedy, the concept is central:

In tragedy, the focus of attention was on the heroes, played by the actors. The hero, and his or her suffering, which is called pathos, was central…. What is passive pathos or action experienced by the hero within the world of tragedy is active drāma, that is, sacrifice and the performance of ritual, from the standpoint of the outer world that frames this world of tragedy. Such an outer world is constituted by the audience of the theater, visualized as a community that becomes engaged in the drāma and that thereby participates in the inner world that is the pathos or ‘suffering’ of the hero.

So although we might expect to find these terms for the suffering or experiences of heroes in tragedy, I was interested to see whether and how they were used in other genres.

Here are a few examples to start the conversation. In this first passage, the king, Kandaules, has forced Gyges to hide in the bedroom and watch his naked wife. Indignant at her husband’s behavior, she urges Gyges to kill her husband while he is asleep. 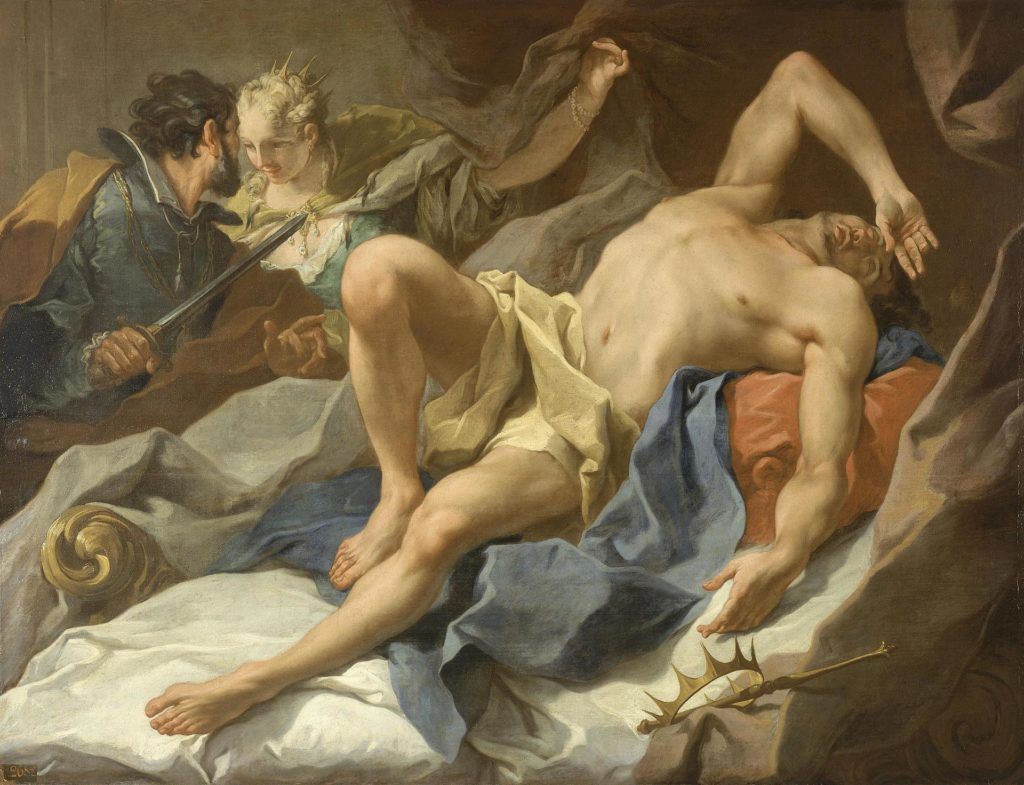 12. They prepared the plot and night came on. Gyges was not released, and there was no escape for him at all: either he or Kandaules must die. He followed the woman into the chamber, and she gave him a dagger and hid him behind the same door. Later, when Kandaules was asleep, Gyges crept out and killed him, taking possession of his wife and his kingship….

13. He took possession of the kingship and was confirmed by the Delphic oracle. The Lydians were indignant at what-was-suffered [pathos] by Kandaules and took up arms, but the partisans of Gyges and the rest of the Lydians made an agreement that if the oracle answered that he was king of the Lydians then he would be king, but if not he would give the rule back to the Hērakleidai. The oracle answered yes and in this way Gyges became king.

Are the sufferings of the heroes a consequence of their own actions? The Partheneion of Alcman suggests this:

Having devised evil deeds, they suffered [paskhein] in a way that cannot be forgotten.
There is such a thing as retribution from the gods.
Blessed [olbios] is he who, with a sound disposition,
weaves through the time of day
without punishment that makes him weep.

and a similar thing is expressed by the Chorus in Agamemnon: 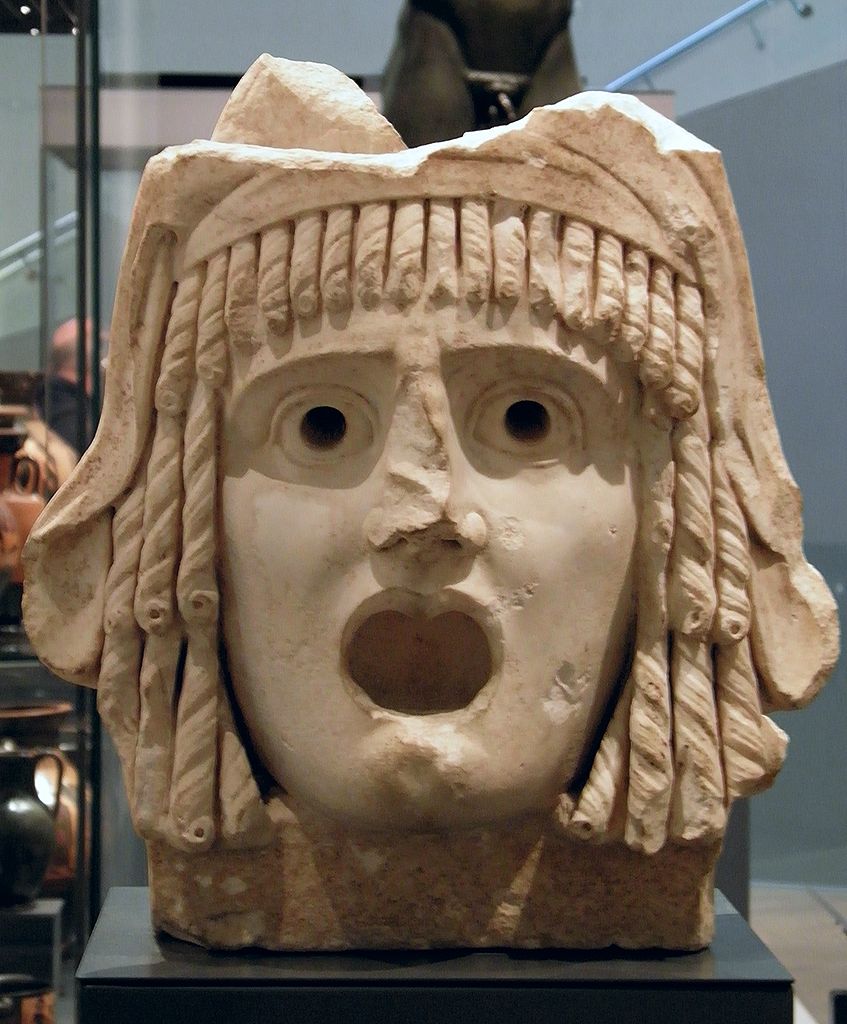 Reproach thus meets reproach in turn—hard is the struggle to decide. The spoiler is despoiled, the slayer pays penalty. Yet, while Zeus remains on his throne, it remains true: “The doer suffers [paskhein].” For it is divine law.

The idea that suffering is punishment from the gods may be one thing, but is it overstepping the mark when humans carry out such retribution? Odysseus tells Eumaios and Philoitios:

go back both of you and bind Melanthios’ hands and feet behind him. Throw him into the store room and make the door fast behind you; [175] then fasten a noose about his body, and string him close up to the rafters from a high bearing-post, that he may linger on alive and suffer [paskhein] difficult pains [algea].”

But this idea of exacting retribution or recompense does seem to be recognized as human nature, if we are to judge by the pronouncement of Theognis:

Certainly the heart of a man shrinks small when suffering [paskhein] great pain [pēma], Cyrnus, and thereafter increases when he takes requital for it.

Plato, however, sounds a note of caution:

Now the majority of men always believe that the right [orthē] advice about these matters [352d] is the advising of such action as will do the greatest possible harm [kaka] to one’s enemies and the greatest possible good [agatha] to one’s friends [philoi]; whereas it is by no means easy to do [drân] much harm [kaka] to others without also suffering [paskhein] in turn much harm oneself.

When Socrates is being tried and knows he will suffer death at the hands of his prosecutors, he considers the possibility of death being a “journey to another place,” i.e. Hādēs, and meeting epic heroes and demigods, and says:

And there will be no small pleasure, I think, in comparing my own experiences [pathos plural] with theirs.

Plato, The Apology of Socrates 41b, Sourcebook[9]

so Plato depicts Socrates in a similar light to those heroes whose experiences were inflicted by other larger-than-life mortals or even the gods themselves. And despite his spirited speech in the trial, there is still a sense that all this has come about as a result of his own actions.

Perhaps surprisingly, even the gods use the term paskhein to refer to themselves—although they are immortal, they are not immune to suffering. For example, after Diomedes injures him, Arēs complains to Zeus:

He showed Zeus the immortal blood that was flowing from his wound, and spoke piteously, saying, “Father Zeus, are you not angered by such doings? We gods are continually suffering [tlân] in the most cruel manner at one another’s hands while performing service [kharis] to mortals; … First he went up to the Cyprian and wounded her in the hand near her wrist, and then he sprang upon me too, equal [īsos] to a superhuman force [daimōn]. [885] Had I not run for it I must either have lain there for long enough suffering [paskhein] pains [pēmata] among the ghastly corpses, or have been eaten alive with spears till I had no more strength left in me.”

Zeus looked angrily at him and said, “Do not come whining here, you who face both ways. [890] you are most hateful [ekhthros] to me of all the gods in Olympus, for you are ever fighting and making mischief. …: it is her [=Hera’s] doing that you are now suffering [paskhein] these things: [895] still, I cannot let you remain longer in such great pains [algea]…”

These examples demonstrate a couple of words that, in epic at least, frequently collocate with paskhein: pain, suffering [pēma], and pain [algos]. Others, based on a collocation search in Perseus under PhiloLogic across the whole corpus include kakós [[κακός] ‘bad, evil, base, worthless, ignoble’ (another Core Vocab term), and deinós [δεινός] ’awful, terrible, awesome’.[11]

Although the sense is often “suffer,” paskhein can also mean simply “experience,” as in this example:

Be well done by [paskhein] because you do good; why send another to tell your tale? tidings of well-doing spread easily.

Turning to the noun pathos, among the most frequent collocates in the corpus are gígnomai [γίγνομαι] ‘be, become, happen’, sumbaínein [συμβαίνω] ‘come together’…. and paskhein itself.

The word occurs in various tragedies, as one might expect, so I looked for a few other examples. This first is from an inscription which, according to Edmonds, probably refers to the battle of Chaeronea (338 BCE). Here the sufferings are those of those who died in war.

O Time, superhuman [daimōn] arch-overseer of every sort of things in the world of mortals, be a messenger of our sufferings [pathos, pl.] to all men, and tell how we died in the renowned plains of Boeotia because we sought to save [sozein] the sacred land of Greece.

CURFRAG.adespota-001.47 (from Palatine Anthology), adapted from translation by J.M. Edmonds[13]

Herodotus provides a more general sense of the sufferings of humankind, in this account of the customs of the Trausi:

When a child is born, the kinsmen sit around it and lament all the ills [kaka] that it must endure from its birth onward, recounting all the sorrows [pathos, pl.] of mankind. The dead, however, they bury with celebration and gladness, asserting that he is rid of so many ills [kaka] and has achieved a state of complete blessedness [eudaimoniā].

Herodotus The Histories 5.4.2, adapted from translation by A.D. Godley[14]

In another account, Herodotus relates a change to a ritual in Sicyon, when Cleisthenes brings in a rival hero, Melanippos, to replace Adrastos as the focus of the local hero-cult: 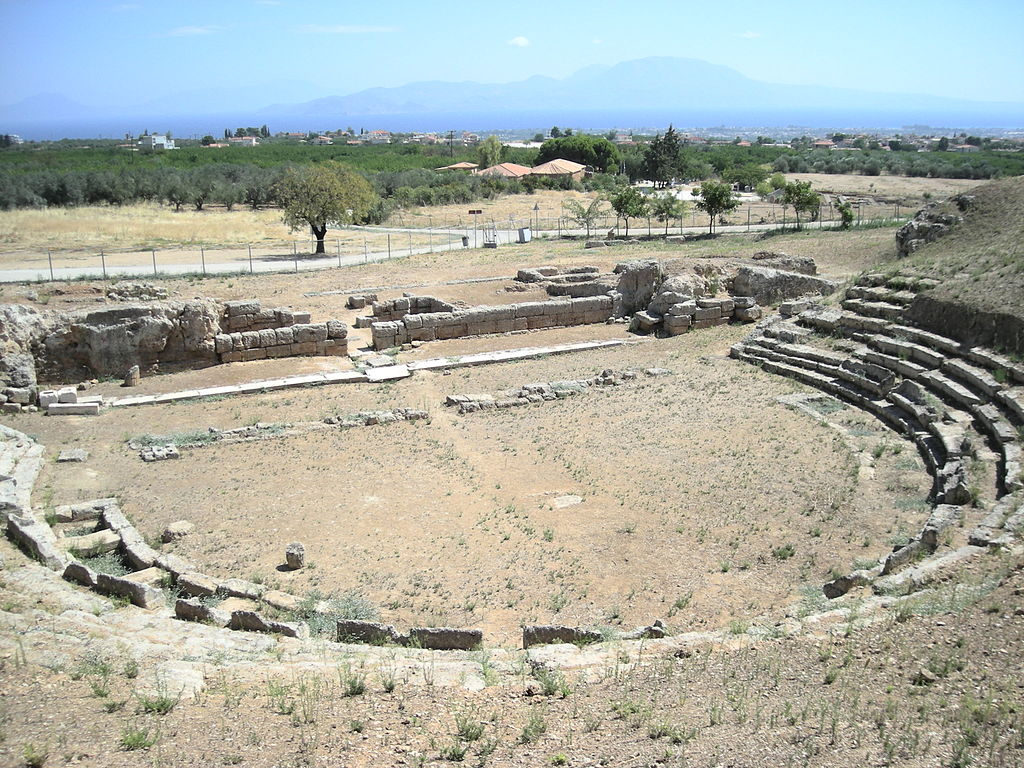 …he conceived the desire to cast out from the land Adrastos son of Talaos, whose hero-shrine [hērōion] stood then as now in the very marketplace of Sicyon… [2] … he sent to Boeotian Thebes saying that he would gladly bring Melanippos son of Astakos into his country, and the Thebans handed him over. [3] When Cleisthenes had brought him in, he consecrated a sanctuary [temenos] for him … Cleisthenes took away all Adrastos’ sacrifices and festivals and gave them to Melanippus. The Sicyonians had been accustomed to pay very great honor [tīmē, verb] to Adrastos … [5] Besides other honors [tīmē, verb] paid to Adrastus by the Sicyonians, they celebrated his sufferings [pathos, pl.] with tragic choruses [khoroi] honoring [tīmē, verb] not Dionysus but Adrastos. Cleisthenes, however, gave the choruses [khoroi] back to Dionysus and the rest of the ritual to Melanippos.

Herodotus The Histories, 5.67, adapted from translation by A.D. Godley[15]

So we return to evidence of the sufferings or experiences of a hero as celebrated in a local ritual with tragic choruses, even if the text is not itself a tragedy.

What other examples are there of suffering or experience described by paskein or pathos, whether of larger-than-life cult heroes celebrated in poetry, or of ordinary mortals through evidence from histories, inscriptions, or customs?

If you have Greek you can use the online search tools to find examples, but if not, the words are tracked in the primary texts in the Kosmos Society Text Library. I hope you will join the discussion in the Forum to share other examples of these words.

Definitions based on glosses in H24H and Sourcebook, supplemented by those given in Autenrieth[16] and LSJ[17].

drân [δρᾶν] ‘do, do something to somebody, perform ritual’

[4] Alcman’s Partheneion. Translated by Gregory Nagy.
Online at the Center for Hellenic Studies.

[11] Results on Perseus at PhiloLogic:
for pathein.
for pathos

[12] Theognis of Megara. Translated by Gregory Nagy.
Online at the Center for Hellenic Studies.

[14] Greek and English texts: Herodotus, with an English translation by A. D. Godley. Cambridge. Harvard University Press. 1920.
Online at Perseus

[15] Greek and English texts: Herodotus, with an English translation by A. D. Godley. Cambridge. Harvard University Press. 1920.
Online at Perseus

John Flaxman. 1795: Diomedes casting his spear against Ares. Illustration to the Iliad, from retelling by Alfred John Church, 1895.
Public domain, via Wikimedia Commons.

__
Sarah Scott has a degree in Language from the University of York, and has worked as an editor, technical author, and documentation manager. She is the Executive Producer for the HeroesX project, and one of the Executive Editors of the HeroesX Sourcebook. She is an active participant and member of the editorial team in Kosmos Society, with a particular interest in content development, document management, word studies, language learning, comparative linguistics, and digital humanities