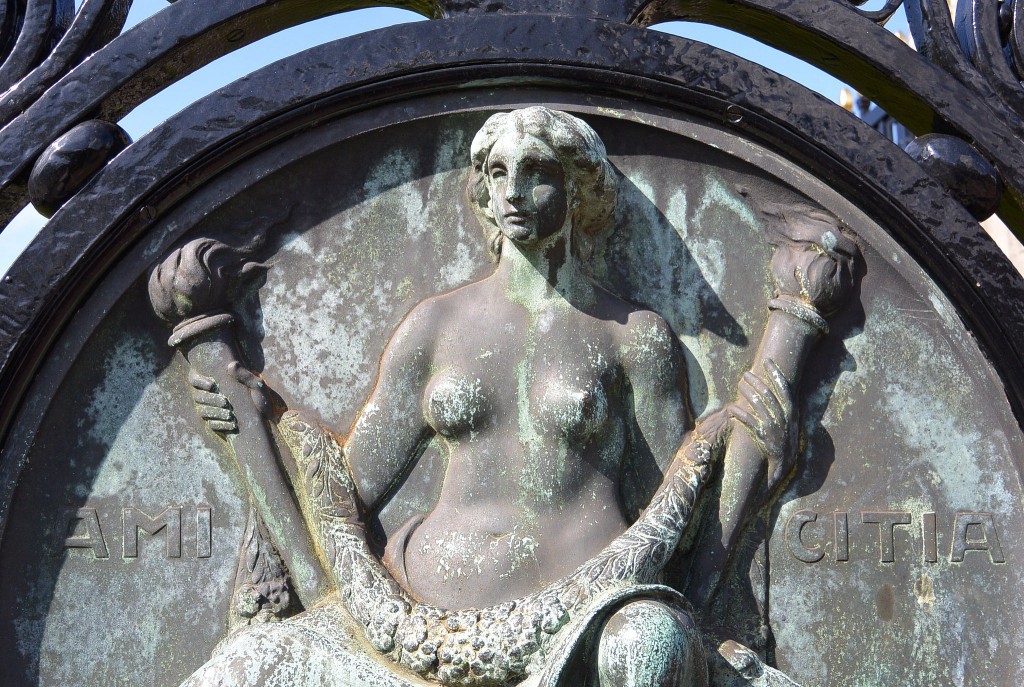 This month I have chosen for a Core Vocab exploration terms that we hold close to our hearts: philos ‘friend’ (noun); ‘dear, near-and-dear, belonging to self’ (adjective); philotēs or philiā ‘the state of being philos’

In H24H[1] Professor Nagy first introduces the term in connection to a passage where Phoenix tells a story in his attempt to convince Achilles to accept Agamemnon’s gifts and to return to the fighting.

(2§4) … Before Phoenix tells his tale, he speaks to those who are listening to him, telling them that they are philoi, ‘near and dear’ to him. Who are these ‘near and dear’ listeners?
2§5. From the standpoint of Phoenix, there are six listeners. These are (1) the hero Achilles; (2) the hero Patroklos, who is the best friend of Achilles; (3 and 4) the heroes Ajax and Odysseus; and (5 and 6) two professional announcers or ‘heralds’. From the standpoint of those who are listening to a performance of the Homeric Iliad, however, they too are listeners. So, the question is, are they too ‘near and dear’? My answer, as we will see in what follows, is that the audience of Homeric poetry is presumed to be near and dear.
2§6. The word philoi, which I translate here as ‘near and dear’, can also be translated simply as ‘friends’ in this same context. This word philos (this is the singular form; the plural is philoi) means ‘friend’ as a noun and ‘near and dear’ as an adjective. It is a term of endearment, an emotional term.

I turned to the Sourcebook[2] and the other “heroized” texts in our Text Library[3].

Hesiod provides advice for living correctly, which is partly practical, but also leads to the idea of becoming close to others and to the gods:

Let it be philon for you to make arrangements in moderation,
so that your granaries may be filled with seasonal life-sustenance.
It is from working that men get many sheep and wealth.
And it is by working that a man becomes more philos than other men to the immortals
and to mortals. They all hate the idle.
…
Be philos to the one who is philos to you, and seek the company of those who seek yours.
(Hesiod Works and Days 306–310, 353, Sourcebook)

Here love or closeness is also used in the following passage in relation to both a god and to a person: 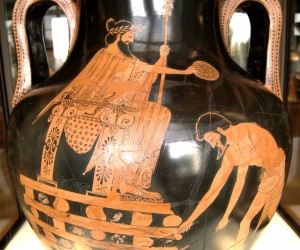 87. Then the Lydians say that Croesus understood Cyrus’ change of mind, and when he saw everyone trying to extinguish the fire but unable to check it, he invoked Apollo, crying out that if Apollo had ever been given by him any gift with kharis, let him offer help and deliver him from the present evil [kakon]. Thus he in tears invoked the god, and suddenly out of a clear and windless sky clouds came together, a storm broke, and it rained violently, extinguishing the pyre. Thus Cyrus perceived that Croesus was philos to a god and an agathos man. He had him brought down from the pyre and asked, “Croesus, who on earth persuaded you to wage war against my land and become my enemy instead of my philos?”
(Herodotus 1.87, Sourcebook)

Croesus seems to equate being philos with being an ally. In this next passage the word is used in establishing a friendship, and it occurs in connection with xeniā. It seems to be more of a practical arrangement of friendship than a sense of “near-and-dear” in an emotional sense; I wonder if perhaps that closeness comes later in a relationship.

69. Croesus learned all this and sent messengers bearing gifts to Sparta to request an alliance, ordering what they must say. They arrived and said, “We have been sent by Croesus, king of the Lydians and other populations, who says, ‘Lacedaemonians, the god delivered an oracle that I should gain the Hellene as philos, and I learn that you are chief of Hellas. So I invite you according to the oracle, wishing to become philos and allied without trick or deceit.’” Croesus made this proclamation through messengers, and the Lacedaemonians, who had themselves heard the oracle that Croesus had received, were pleased by the arrival of the Lydians and swore oaths of reciprocal guest-host relations [xeniā] and alliance.
(Herodotus 1.69, Sourcebook)

In the next example, Creon also seems to be using the word in relation to his country:

And if any man thinks a philos more important than his fatherland, that man, I say, is of no account. Zeus, god who sees all things always, be my witness— |185 I would not be silent if I saw disaster [atē], instead of salvation [sōtēriā], marching upon the citizens. Nor would I ever make a man who is hostile to my country a philos to myself, because I know this, that our country is the ship that brings us to salvation, and that only when |190 we sail her on a straight course can we make true philoi.
(Sophocles Antigone 182–190, Text Library) 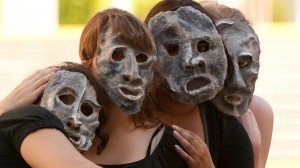 By contrast, Antigone herself uses it for a personal relationship with her brother in this discussion with her sister Ismene:

[Antigone]… I will bury him—it would honor me to die while doing that. I shall rest with him, philē with philos, being a criminal for having performed a holy deed. For the time is greater |75 that I must serve the dead than the living, since in that world I will rest forever. But if you so choose, continue to take tīmē away from what the gods in tīmē have established.

Ismene
I do not take tīmē away from them. But to act in violation [biā] of the citizens’ [politai, from polis] will—of that I am by nature incapable.

Antigone
|80 You can make that your pretext! Regardless, I will go now to heap a tomb over a brother who is most philos to me.
(Sophocles Antigone 72–81, Text Library)

The Greek term in this last is philtatos which exemplifies the ‘ascending scale of affection’ discussed in H24H, again in connection with Iliad 9:

I’ll end with the word used in an exchange between two people in the sense of closeness and love, in this beautiful reunion between Helen and Menelaos:

Helen
[625] O Menelaos, dearest [most philos] of men, the time was long, but delight is just now ours.

With joy I have found my husband, friends [philai], I have embraced my dear one, after long days of blazing light.

Menelaos
[630] And I have found you; but I have many questions about those years; now I do not know what to begin with first.

Helen
I am so happy, the hair rises on my head and my tears run down. I fling my arms around your neck, [635] dear husband, to have my delight.

Menelaos
O dearest [most phila] sight! I have no fault to find: I have my wife, the daughter of Zeus and Leda; your brothers on their snow-white steeds [640] blessed you, blessed you at an earlier time, while torches blazed, but the god who took you from my home is driving us on to another fortune, better than this. An evil [kakon] that was good [agathon] brought you together with me, your husband [645] after a long time, but may I still benefit by my good luck.

Chorus
May you benefit indeed, and I join in the same prayer; for when there are two, it is not possible for one to be unhappy and the other not.
(Euripides Helen 625–647, Text Library) 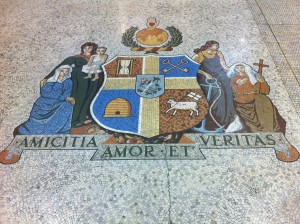 I have illustrated the word with images that include a personification of Amicitia (a Latin word meaning ‘friendship’.) How might you choose to illustrate it?

I hope we can share other passages to further explore this word and how it was used in different contexts by the ancient Greeks.
Members of the community can join the discussion in the forum. (Updated): here is the link to the forum thread.