Dogs for the ancient Greeks 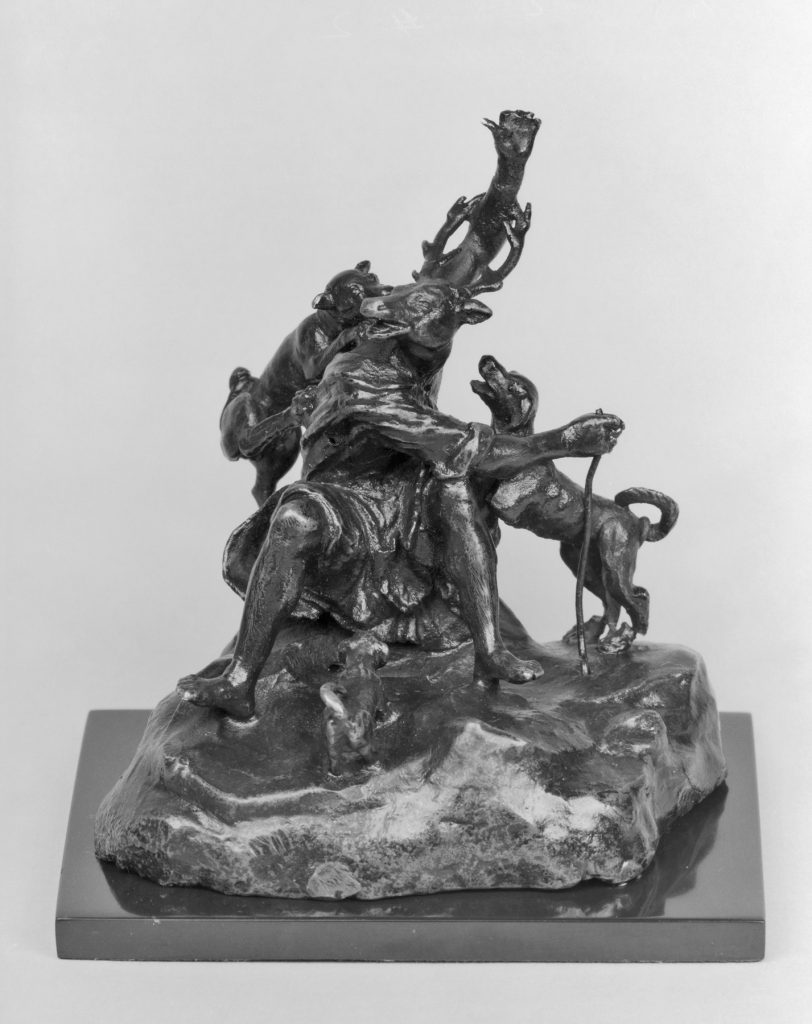 [1] Anger [mēnis], goddess, sing it, of Achilles, son of Peleus— 2disastrous [oulomenē] anger that made countless pains [algea] for the Achaeans, 3 and many steadfast lives [psūkhai] it drove down to Hādēs, 4 heroes’ lives, but their bodies it made prizes for dogs [kuōn, pl.] [5] and for all birds, and the Will of Zeus was reaching its fulfillment [telos].
Iliad 1.1–5

In this very familiar passage we see the threat of the horrific prospect of bodies being eaten by dogs: a taboo. But did this ever happen? How did ancient Greek texts and art portray dogs? Here are a few passages to start the discussion.

One of the worst offenders in the palace at Ithaka is punished in an extreme manner:

As for Melanthios, they took him through the hall into the inner court. There they cut off his nose and his ears; [475] they drew out his vitals and gave them to the dogs [kuōn, pl.] raw, and then in their fury they cut off his hands and his feet.
Odyssey 22.474–477

These negative associations may throw light on why comparing someone to a dog is such an insult. Achilles uses this comparison twice during the quarrel with Agamemnon:

We have followed you, shameless one, for your pleasure, not ours—to gain satisfaction [tīmē] from the Trojans for you—you with the looks of a dog [kunōpēs]—and for Menelaos.
Iliad 1.158–159
[225] “Wine-bibber,” he cried, “you with the looks [omma pl.] of a dog [kuōn] and the heart of a deer, you never dare to go out with the army of warriors in fight, nor yet with our chosen (best of the Achaeans) men in ambuscade.
Iliad 1.225–227 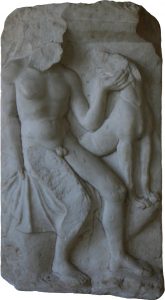 However, there are also many examples of dogs being used for the benefit of their masters, particularly in hunting.

Finally [telos] messengers of the Mysians came to Croesus and said, “O King, an enormous monster of a boar has arisen in our land and devastates our crops and fields. We are unable to capture it, for all our eagerness. So now we ask you to send with us your son and carefully chosen young men and dogs [kuōn pl.], so that we may drive it from our land.” They asked for these things, but Croesus remembered the words [epea] of the dream and said, “Do not mention my son again. I would never send him with you. He is a newlywed and is busy with that. However, I will send carefully chosen men of the Lydians and a pack of hunting dogs [kunēgesion], and I will command those who go to be most eager to work with you to drive the beast from your land.”
Herodotus Histories 1.36.2–3

Both the young men and dogs are to be carefully chosen [logas], as if both are on a par when it comes to hunting. Their training would have been important, as we see with the aged Argos: 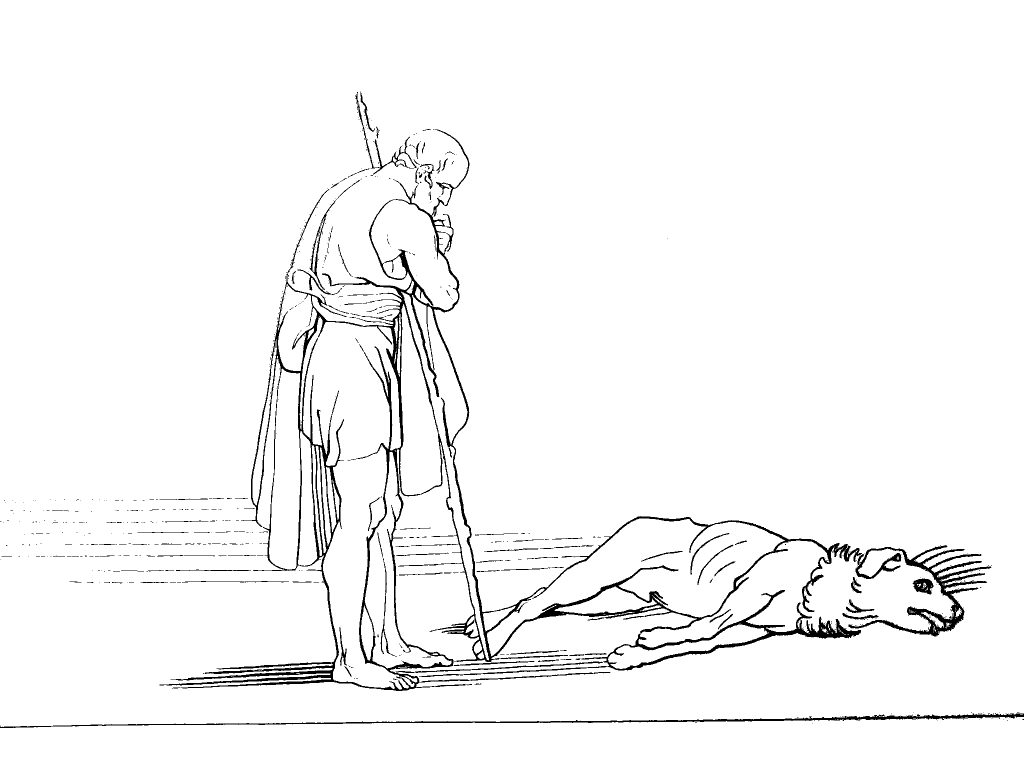 [290] As they were thus talking, a dog [kuōn] that had been lying asleep raised his head and pricked up his ears. This was Argos, whom patient-hearted Odysseus had bred before setting out for Troy, but he had never had any work out of him. In the old days he used to be taken out by the young men [295] when they went hunting wild goats, or deer, or hares, but now that his master was gone he was lying neglected on the heaps of mule and cow dung that lay in front of the stable doors till the men should come and draw it away to manure the great field; [300] and he was full of fleas. As soon as he saw Odysseus standing there, he dropped his ears and wagged his tail, but he could not get close up to his master. When Odysseus saw the dog on the other side of the yard, [305] he dashed a tear from his eyes without Eumaios seeing it, and said:

“Eumaios, what a noble hound [[kuōn] that is over yonder on the manure heap: his build is splendid; is he as fine as he looks, or is he only one of those dogs [kuōn, pl.] that come begging about a table [trapezeus, pl.], [310] and are kept merely for show?” “This hound,” answered Eumaios, “belonged to him who has died in a far country. If he were what he was when Odysseus left for Troy, [315] he would soon show you what he could do. There was not a wild beast in the forest that could get away from him when he was once on its tracks. But now he has fallen on evil times, for his master is dead and gone, and the women take no care of him.
Odyssey 17. 290–319

This passage raises many questions, for example why didn’t the women take care of him? Was it not a woman’s role, or was it because the whole household is in disarray? Were hunting dogs associated only with young men?

We find dogs again at the funeral of Patroklos, sacrificed along with horses and young men:

[170] Against the bier he leaned two-handled jars of honey and unguents; four proud horses did he then cast upon the pyre, groaning the while he did so. The dead hero had had nine dogs [kuōn pl.] fed at the table [trapezeus, pl.]; two of them did Achilles slay and threw upon the pyre; [175] he also put twelve brave sons of noble Trojans to the sword and laid them with the rest, for he was full of bitterness and fury.
Iliad 23.170–176

These dogs sound more like pets, or at least having a close domestic association with their master. Presumably they were fed with food from the humans’ feast, but it again puts us in mind of dogs feeding and that threat of their eating humans. But it does not actually happen even when Achilles treats the body of Hector so badly and threatens that dogs will eat his body:

“Fare well,” he cried, “Patroklos, even in the house of Hādēs; [180] I am now doing all that I have promised you. Twelve brave sons of noble Trojans shall the flames consume along with yourself, but dogs, not fire, shall devour the flesh of Hector son of Priam.”

Thus did he vaunt, but the dogs [kuōn pl.] came not about the body of Hector, [185] for Zeus’ daughter Aphrodite kept dogs [kuōn pl.] off him night and day, and anointed him with ambrosial oil of roses that his flesh might not be torn when Achilles was dragging him about.
Iliad 23.179–187

These passages are just a few examples from the Homeric epics or Herodotus. What other evidence is there from elsewhere in these or in other texts? Were the dogs referred to in the Iliad wild scavengers or those owned by the Achaeans and Trojans? Were dogs primarily for hunting, or is there evidence of their being put to other uses? What kinds of associations are there between dogs and humans? Is it only with young men, or also with women, or with older men? Please join the forum discussion to share passages and images.

All quotations, with additional annotations, are from The Ancient Greek Hero in 24 Hours Sourcebook of Original Greek Texts Translated into English, Gregory Nagy, General Editor.

You might like to watch a section of this video dialogue with Leonard Muellner, in which he talks about dogs, taboo behavior, and epithets (09:52–17:03). Mentioned in the video (but not referred to in the preparation of this post): Manfred Faust “Die künstlerische Verwendung von κύων, ‘Hund’, in den homerischen Epen,” Glotta 48 (1970) 8–31. Charles Segal The Theme of the Mutilation of the Corpse in the Iliad.

Dan-El Padilla Peralta during in an Open House event discussed the scene with Argos and other, related, passages (32:03–40:15).

You might like to read Chapter 4 of The Captive Women’s Lament in Greek Tragedy (University of Texas, 2006) where Casey Dué discusses the metaphor world of dogs near the end of the chapter on the Hecuba.

John Flaxman: Ulysses and his Dog, illustration to The Odyssey of Homer, 1905, public domain, via Wikimedia Commons.