Recent Book Club discussion prompted me to think about how human emotions were depicted in some of the readings from Greek antiquity.

In the Trojan Women, Andromache’s reaction to her son’s fate—death by being thrown out of the battlements—is not physical, a loud, wailing lament, but a subdued, courageous reaction. To get a proper burial for her son, she does not fight back vehemently when the child is taken. The pain comes across loudly in the silence of her farewell. 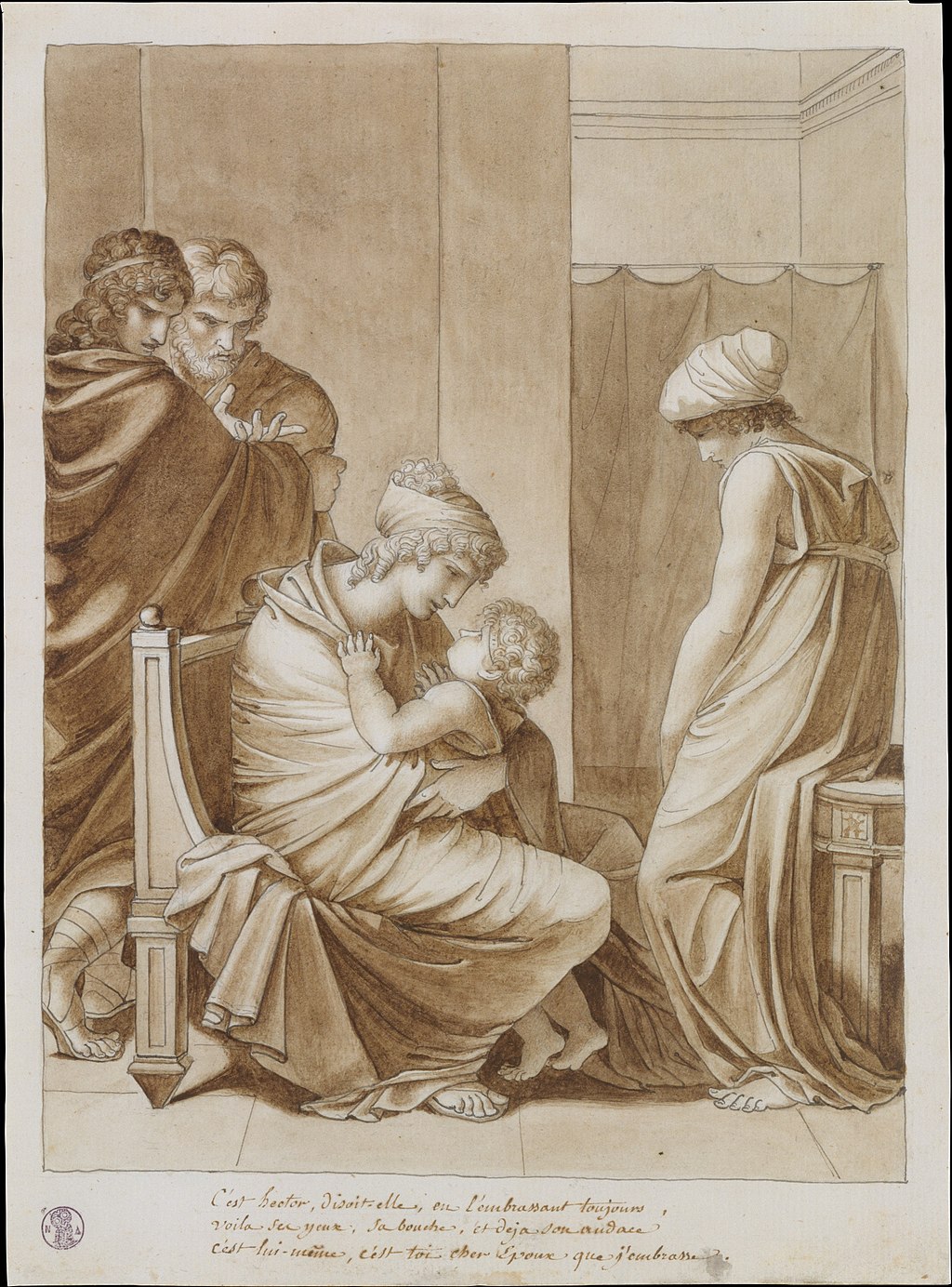 [735] For if you say anything to anger the army, this child will find no burial [taphos] nor pity either. But if you hold your peace and with composure take your fate, you will not leave his corpse unburied, and you yourself will find more favor with the Achaeans…

Oh to clasp your tender limbs, a mother’s fondest [most philos] joy! Oh to breathe your fragrant breath! In vain it seems these breasts did suckle you, wrapped in your swaddling-clothes; [760] all for nothing I used to toil [ponoi] and wear myself away! Kiss your mother now for the last time, nestle to her that bore you, twine your arms about my neck and join your lips to mine!…

Lamenting is one of the dominant emotions expressed in the epics and tragedies. Sadness, physical pain and emotional pain are tangible and poignant. It is a personal emotion as well as communal. 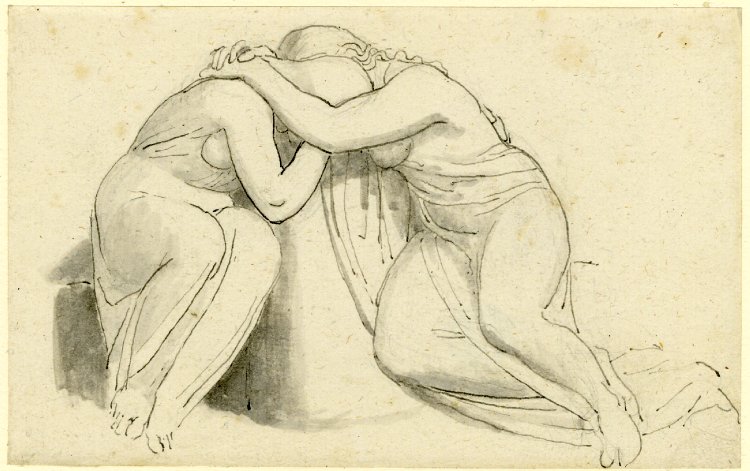 477 Hector, I too am wretched. For we were born sharing a single fate, 478 the two of us—you in Troy, in the palace of Priam, 479 and I in Thebe, the city at the foot of the wooded mountain of Plakos [480] in the palace of Eëtion, who raised me when I was little 481 —an ill-fated father and a daughter with an equally terrible fate. If only he had never fathered me. 482 But now you [= Hektor] are headed for the palace of Hādēs inside the deep recesses of earth, 483 that is where you are headed, while I am left behind by you, left behind in a state of hateful mourning [penthos], 484 a widow in the palace. And then there is the child, not yet bonded to you, so young he is, [485] whose parents we are, you and I with our wretched fate. Neither will you be for him, 486 no you will not, Hektor, of any help, since you died, nor will he be of any help for you, 487 even if he escapes the attack of the Achaeans, with all its sorrows, 488 still, for the rest of his life [490] leaves the child with no agemates as friends. 491 He bows his head to every man, and his cheeks are covered with tears.
Iliad 22.477–492, from Sourcebook[1]

Dark humor is not absent either. In Odyssey 10, the way Elpenor dies after a heavy night of drinking, even accompanied with sadness, can make you laugh. 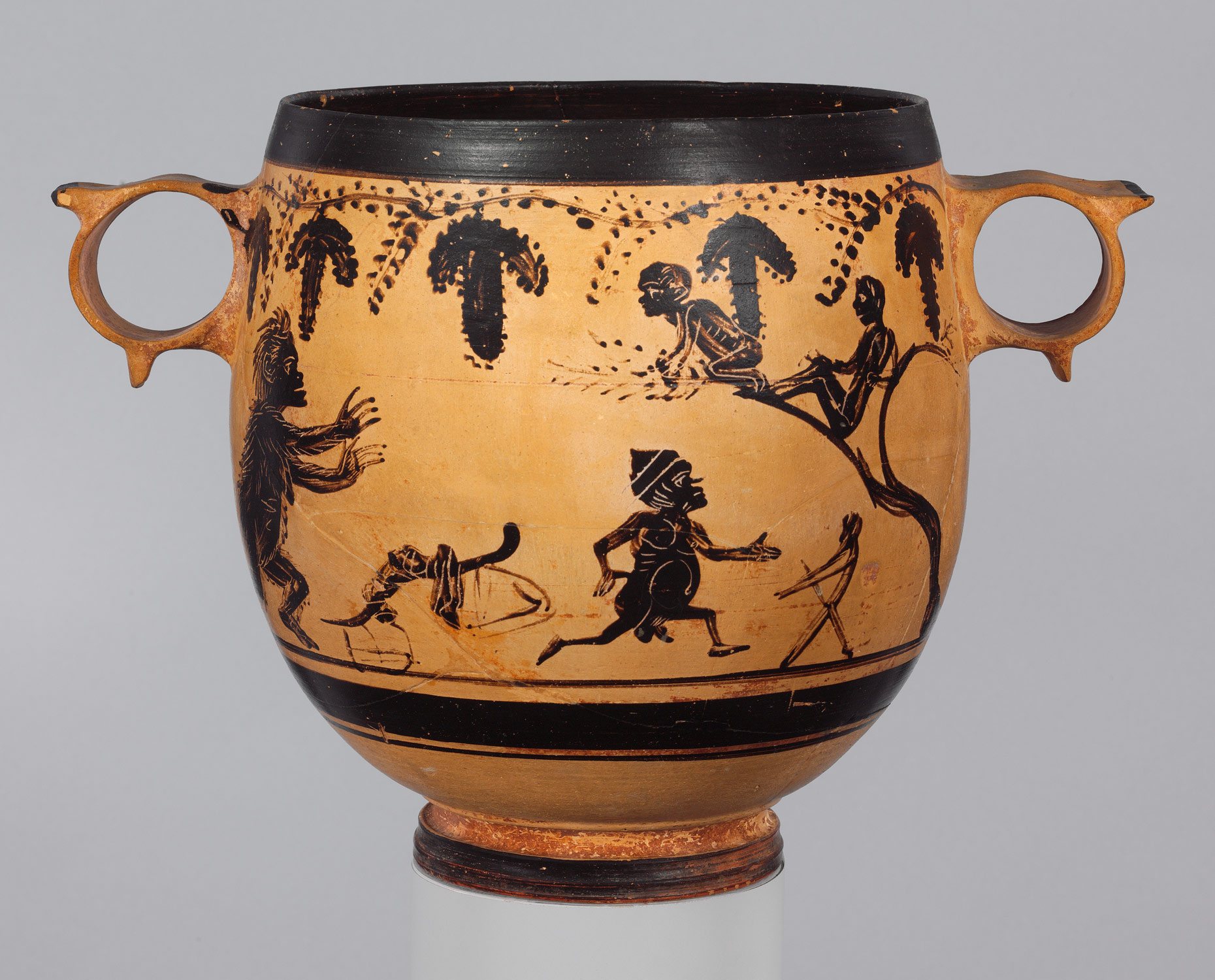 We had with us a certain youth named Elpenor, not very remarkable for sense or courage, who had got drunk [555] and was lying on the house-top away from the rest of the men, to sleep off his liquor in the cool. When he heard the noise of the men bustling about, he jumped up on a sudden and forgot all about coming down by the main staircase, so he tumbled right off the roof [560] and broke his neck, and his spirit [psūkhē] went down to the house of Hādēs.
Odyssey 10.553–561

Unrequited love has a long history and it is just as painful as you might think today!

In Euripides’ Hippolytus, when Phaedra’s love does not get a favorable response from Hippolytus, she becomes bed stricken.

135 This is the third day, I hear, that her lips have not touched food, and she keeps her body pure from the grain of Demeter, 140 eager to hide her sorrow [penthos] and to put into the cheerless harbor of death.

The woes and the hateful illnesses of mortals! What shall I do? What not do? Here is your sunlight, here the bright air. Now outside of the palace 180 is your sickbed, for your every word was to come here, but soon enough you will be eager for your bedroom again, since, taking pleasure in nothing, you will quickly become helpless. Whatever is present does not please you, but that which is absent you think more dear. 185 It is better to be ill than to care for the ill, for one is a single trouble, but to the other is attached both heartsickness and labor [ponos] with one’s hands. The whole of human life is full of pain, 190 and there is no rest from trouble [ponoi]. But if there is anything more philon than life, darkness hides it in the clouds in its embrace, and we show ourselves to be wretchedly in love with that thing which glistens on the earth, 195 because of inexperience of any other life, and the things which lie below the earth are unrevealed. On tales [mūthoi] we vainly drift.
Hippolytus 135–141, 180–197

Love is such a strong four-letter word that would make hearts tingle. 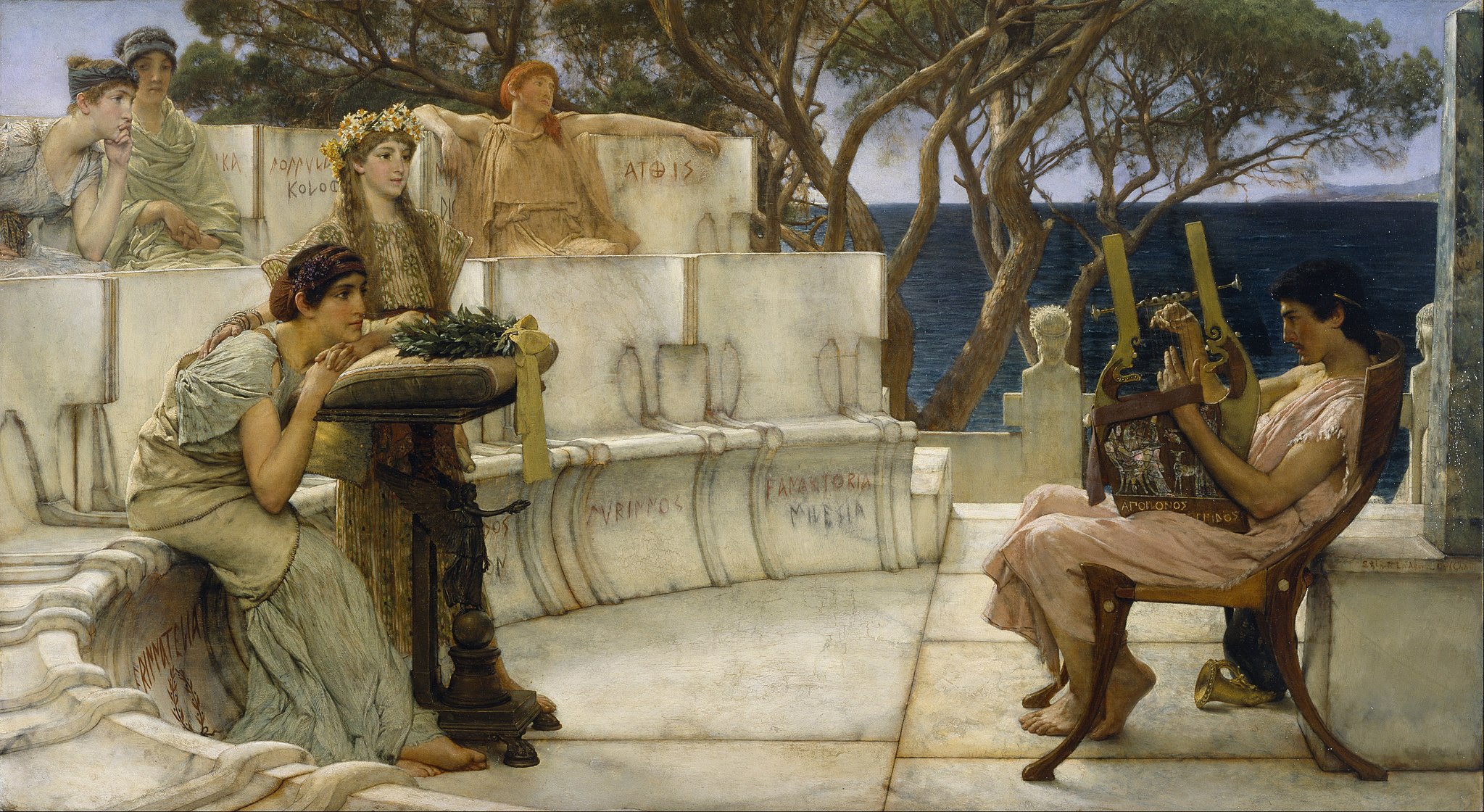 1 Some say a massing of chariots and their drivers, some say of footsoldiers, 2 some say of ships, if you think of everything that exists on the surface of this black earth, 3 is the most beautiful thing of them all. But I say it is that one thing 4 that anyone passionately loves [erātai]. Sappho 16 1–4

When lovers meet after a very long and tumultuous ordeals, their get-together melts your heart. 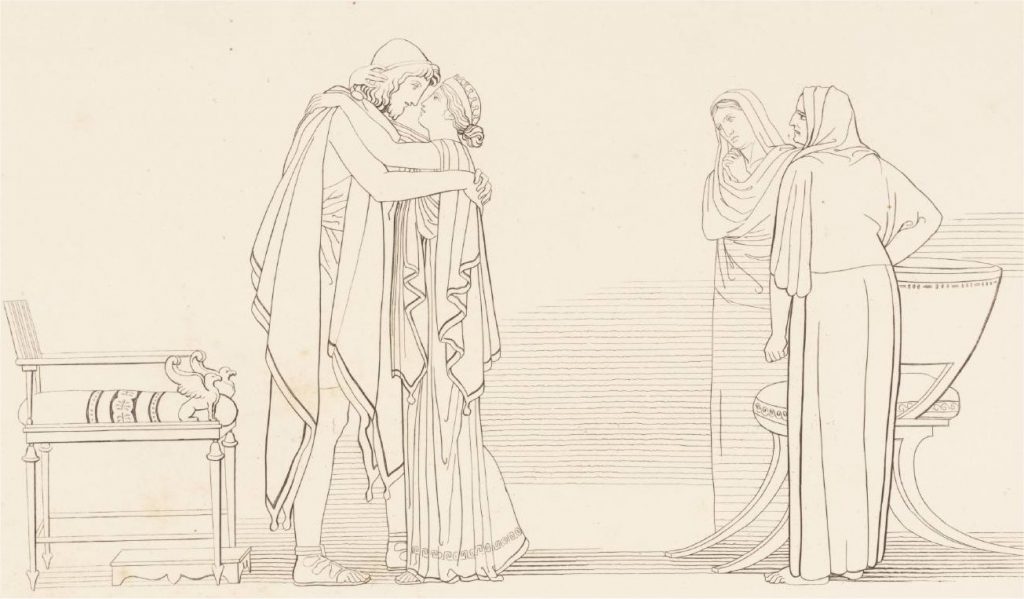 Then Odysseus in his turn melted, and wept as he clasped his dear and faithful wife to his bosom. As the sight of land is welcome to men who are swimming towards the shore, when Poseidon has wrecked their ship [235] with the fury of his winds and waves—a few alone reach the land, and these, covered with brine, are thankful when they find themselves on firm ground and out of danger—even so was her husband welcome to her as she looked upon him, [240] and she could not tear her two fair arms from about his neck. Indeed they would have gone on indulging their sorrow till rosy-fingered morn appeared, had not the owl-vision goddess Athena determined otherwise, and held night back in the far west, while she would not suffer Dawn of the golden throne to leave Okeanos, [245] nor to yoke Lampos and Phaethōn, who are the horses that pull Ēōs to break the day upon humankind.
Odyssey 23.231–246

Anger and hatred, especially when Achilles experiences them, have no mercy. 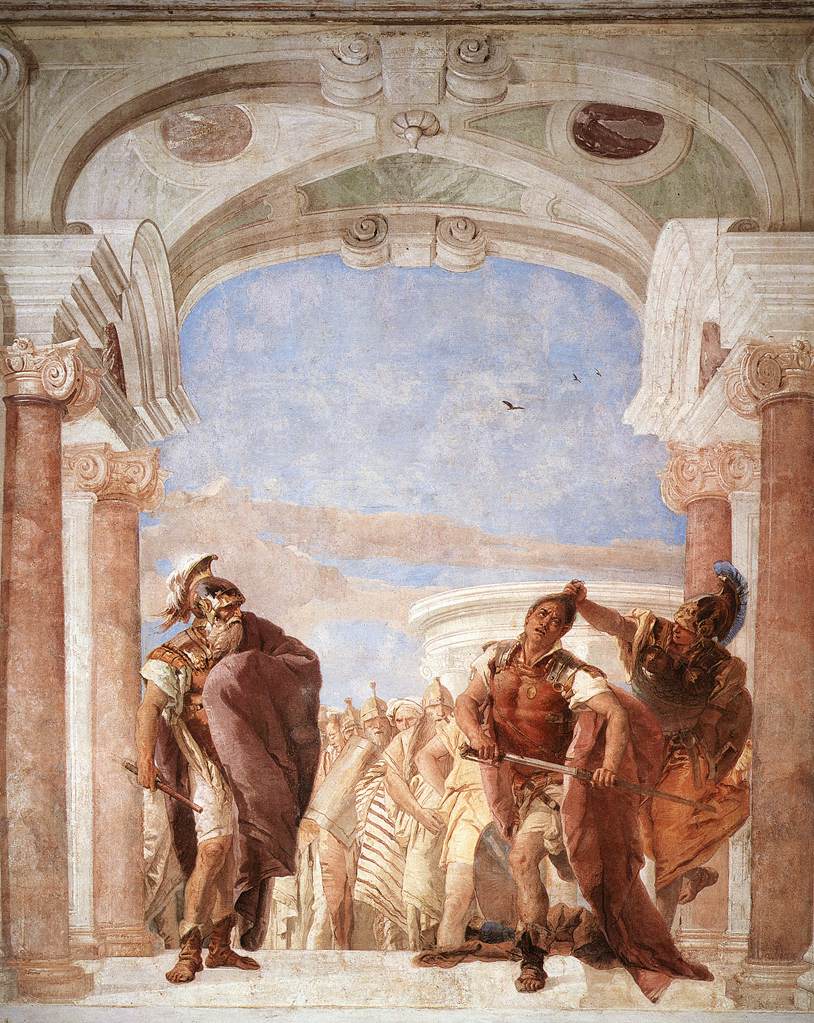 Swift-footed Achilles glared at him and answered, [345] “Dog, talk not to me neither of knees nor parents; 346 I wish that somehow my menos and thūmos impelled me 347 to slice you up and eat your meat raw, for the things you did, as nothing shall save you from the dogs—it shall not be, [350] though they bring ten or twenty-fold ransom and weigh it out for me on the spot, with promise of yet more hereafter. Though Priam, son of Dardanos, should bid them offer me your weight in gold, even so your mother shall never lay you out and make lament over the son she bore, but dogs and vultures shall eat you utterly up. Iliad 22.344–355

Yet even Achilles came to know the power of mercy. In Iliad 24, he shows pity to Priam—father of his eminent enemy—who was begging for his son’s body. 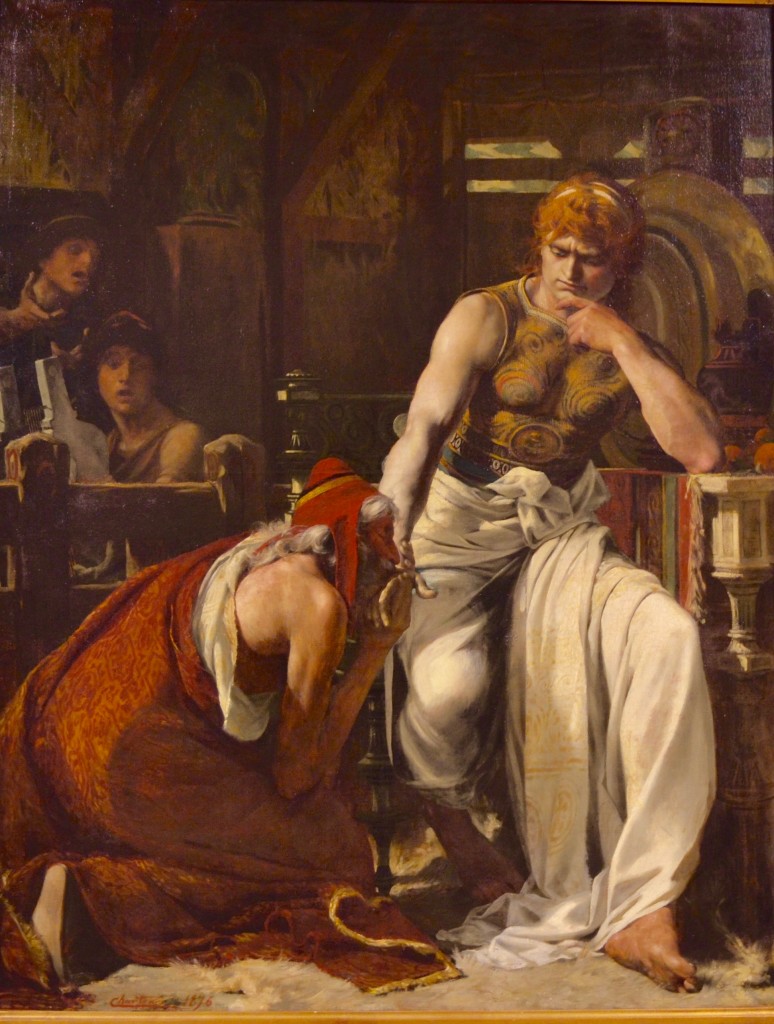 476Tall King Priam entered without their seeing him, and going right up to Achilles he clasped his knees and kissed the dread manslaughtering hands that had slain so many of his sons. O Achilles, to the gods; and have pity on me. 504 Remember your own father. But I am far more pitiable, [505] for I have steeled myself as no one yet among earthbound mortals has ever steeled himself before me. 506 I have raised to my lips the hand of the one who killed my son. 507 Thus he [= Priam] spoke, and he stirred up in him [= Achilles] a longing to cry in lament [goos] for his own father. 508 He touched the old man’s hand and moved him gently away. 509 And they both remembered. One of them remembered Hector the man-killer [510] and cried for him, shedding tears thick and fast as he lay near the feet of Achilles. 511 As for Achilles, he was crying for his own father at one moment, and then, at the very next moment, 512 he would be crying for Patroklos.
Iliad 24.476-512

Joy is another emotion depicted beautifully. 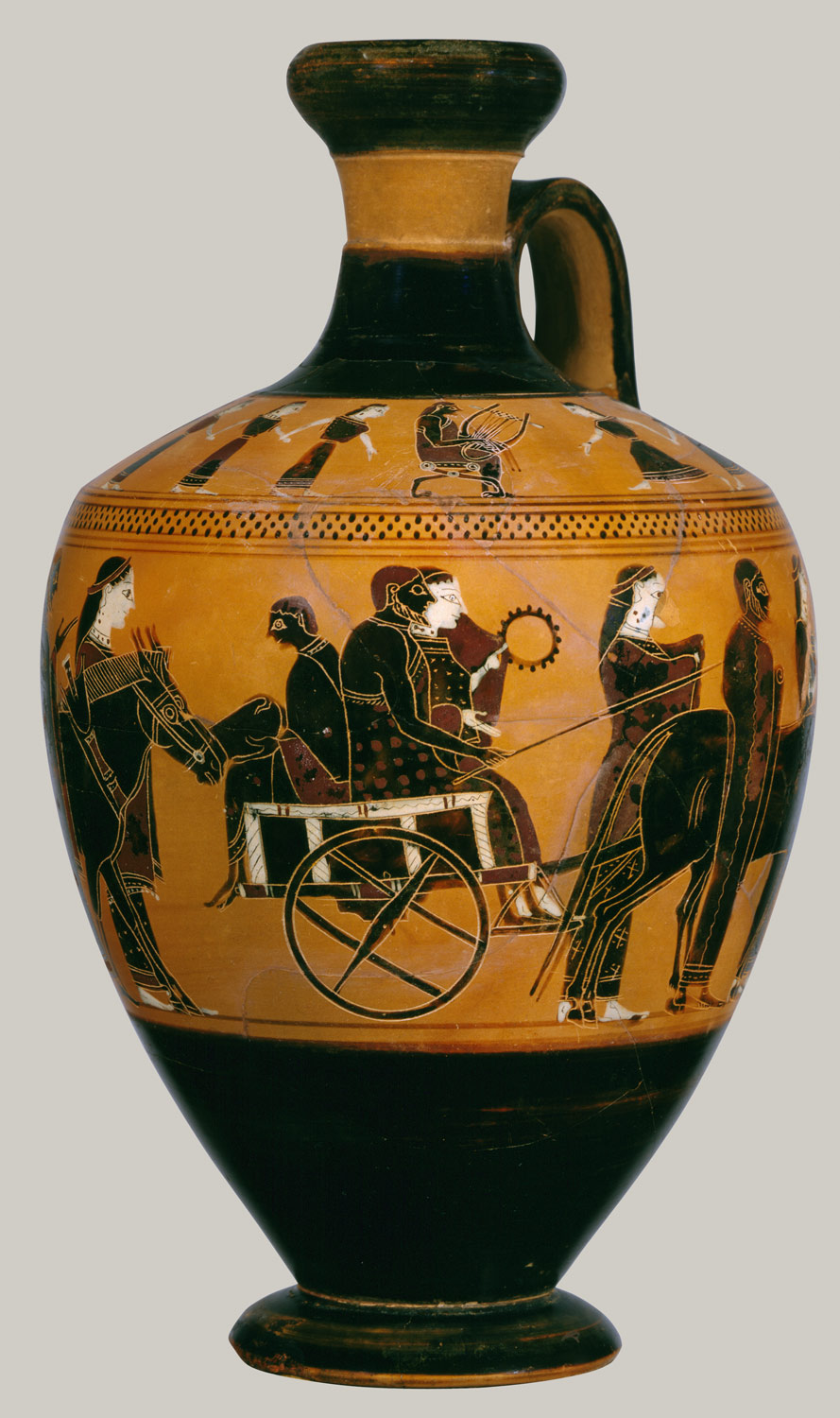 24 And the sweet song of the pipe mixed…

25 And the sound of the cymbals, and then

And the sound of the cymbals, and then the maidens

26 sang a sacred song, and all the way to the sky

28 And everywhere through the streets…

30 And myrrh and cassia and frankincense were mingled.

31 And the older women cried out elelu.

32 Meanwhile all the men sang out a lovely high-pitched song,

33 calling on Apollo Pāōn, the far-shooter, master of playing beautifully on the lyre.

34 And they sang the song of Hector and Andromache, both looking just like the gods [theoeikeloi].

All these passages, coming to us from thousands of years ago, arouse similar emotions in our current era. They bond us with antiquity and they would resonate similar emotions for the future. There are many more passages full of emotions. Visit the Forums and post your own favorite passage.

Pierre-Paul Prud’hon, Andromache and Astyanax, circa 1798. The Metropolitan Museum of Art of New York City
This file is made available under the Creative Commons CC0 1.0 Universal Public Domain Dedication

Terracotta lekythos: Attributed to the Amasis Painter, The Metropolitan Museum of Art of New York City

Janet M Ozsolak is a member of the Kosmos Society