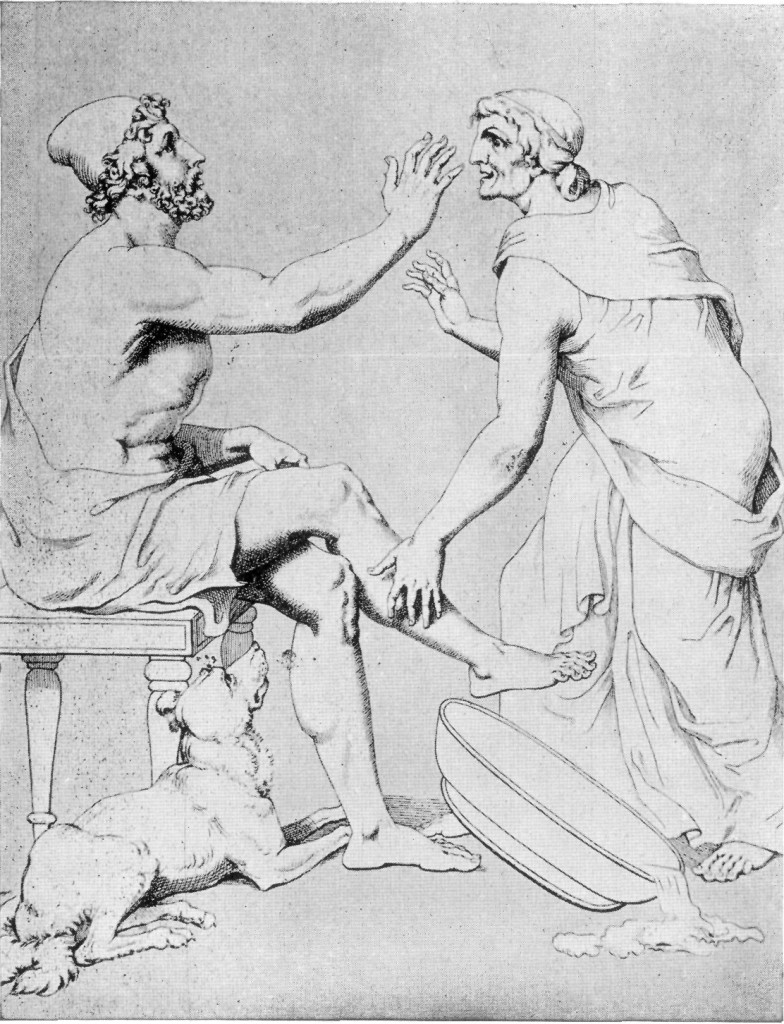 Continuing our look at the etymology of proper names, it is interesting that the two women who jointly raised Odysseus have very similar names: Eurycleia means “broad fame,” and Anticleia means “opposing fame.” Do their names constitute a clue concerning their respective attitudes towards Odysseus’ quest for kleos by joining the expedition to Troy?

Eurycleia was Odysseus’ wet nurse and the one who would have had a primary role in raising him (and later Telemachus). The closeness of their relationship is emphasized in the scene where she recognizes the disguised hero from the scar on his leg. She obeys his instructions even at the price of temporarily deceiving her mistress Penelope.

Odysseus’ mother Anticleia is a shady character in the Odyssey; we meet her only in the Underworld, where she says that she died from a broken heart, having given up hope of ever seeing her son again. Odysseus’ futile attempt to reach out to her could be seen as an indication of his distant relationship with his mother. His warm memories of planting trees in the family’s orchard with his father is not matched by any such memories of his mother.

The Telemacheia, in which Telemachus undertakes his own journey in quest of news about his father, is sometimes said to represent Odysseus’ journey on a smaller scale. If so, we might look at the attitudes of Eurycleia and Penelope towards Telemachus’ undertaking such an unprecedented trip. Telemachus knew that his mother would be absolutely opposed to the idea, so much so that he did not even tell her of his intentions. Instead, he confided in Eurycleia, who swore that she would not let Penelope know until twelve days had passed.

All indications are that Anticleia also would have opposed her son’s decision to go on an even more risky venture to Troy. Perhaps she was behind Odysseus’ attempt to feign insanity when he was recruited by Menelaus and Palamedes. She was “anti-fame” and expected the worst outcome, leading to her early death. Eurycleia, on the other hand, was supportive of both Odysseus and Telemachus, and her trustworthiness was an underpinning of their winning “broad fame.”