The Parthenon is part of our collective imagination as an exceptional monument. It is interesting to note that, according to Douglas Frame, the name Parthenon was officially given to it later.

§3.44 In concrete form it was of course the Parthenon that displayed Athena parthénos most impressively to the city and to the world. Paradoxically this building, constructed between 447 and 432 BC, did not begin to be called the Parthenon until a century later, and it was never called that officially. Parthenon seems rather to have been a nickname, the exact source of which is obscure, but which soon gained currency because of its obvious aptness to the virgin goddess. Athena’s temple was never officially called {401|402} the Parthenon and she herself most likely never had the cult title parthénos. Nevertheless the virgin war goddess is certainly the figure who occupied the Parthenon.

This monument is empty nowadays, but is it disembodied? There are few testimonies from the time of its construction which give a detailed description of the components of this sumptuous temple and the reasons for choosing the ornaments. Was it built for the people or for the gods? What were the themes or myths chosen for the decorations of the friezes?

…possessions that will never die; on the one hand the memory of their achievements, on the other, the beauty of the memorials set up in their honor,—yonder Gate-houses, the Parthenon, the porticoes…

Therefore the Athenians are the guardians of an everlasting emblem. 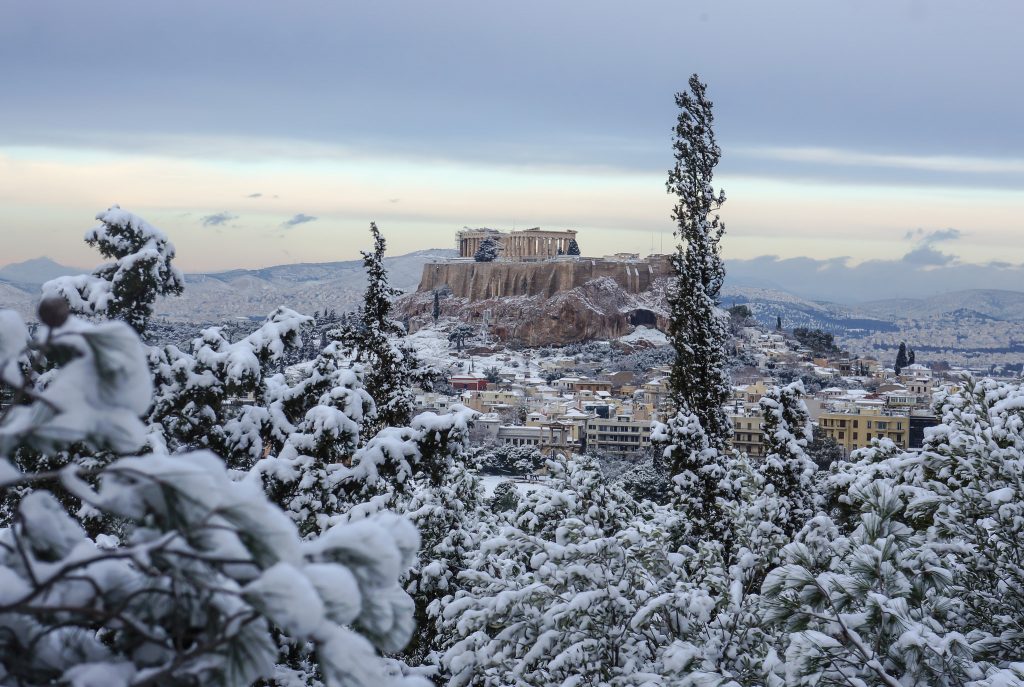 Even today, in 2021, a picture of the Parthenon covered with snow makes the news and everyone around the earth knows what is represented.

The temple stands on the top of the Acropolis overlooking the city of Athens. This hill was a sacred place and Herodotus (480–425 BCE) recalls the contest between Poseidon and Athena for the ownership, won by Athena. Richard P. Martin tells in his book Myths of the Ancient Greeks[3] that women lost their right to vote after the contest, and also the right to have their children have their mother’s name.

As Herodotus writes about the contest:

I will tell why I have mentioned this. In that acropolis is a shrine of Erechtheus, called the “Earthborn,” and in the shrine are an olive tree and a pool of salt water. The story among the Athenians is that they were set there by Poseidon and Athena as tokens when they contended for the land. 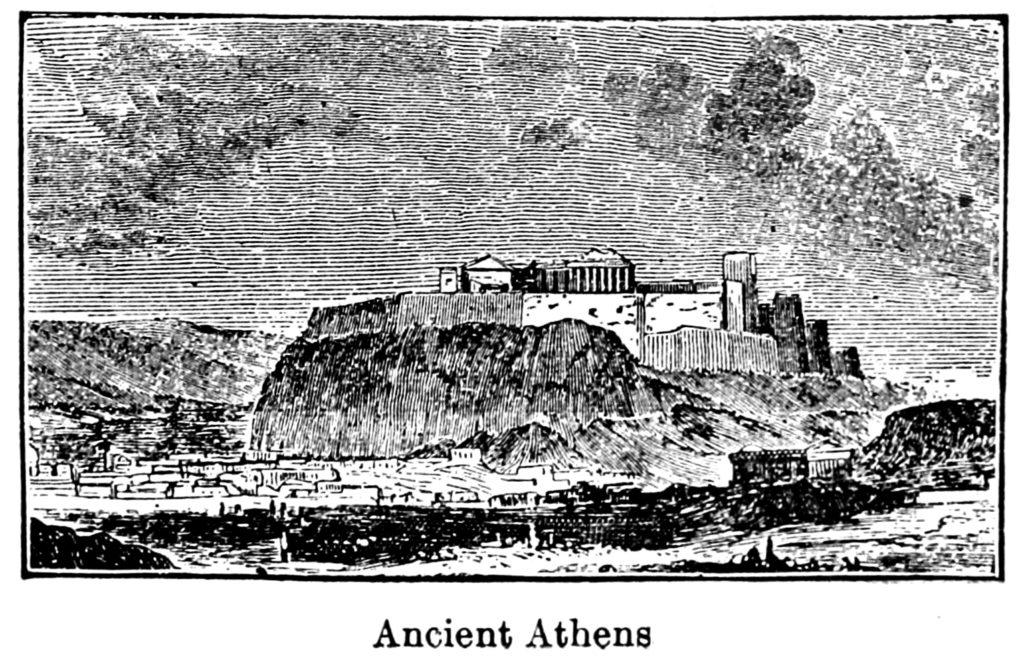 Herodotus also describes how the Persians (c480 BCE) destroyed and burned the Acropolis, the temple of Athena, and the older Parthenon—which stood there before the Parthenon that we are familiar with—was built.

The Persians who had come up first turned to the gates, opened them, and murdered the suppliants. When they had levelled everything, they plundered the sacred precinct and set fire to the entire acropolis…

It happened that the olive tree was burnt by the barbarians with the rest of the sacred precinct, but on the day after its burning, when the Athenians ordered by the king to sacrifice went up to the sacred precinct, they saw a shoot of about a cubit’s length sprung from the stump, and they reported this

Paul Cartledge, in Ancient Greece: A History in Eleven Cities[5], remarks that the religious attitudes of Athenians were different from ours, because they did not mind using the Parthenon as a storage bank to house the state’s principal financial reserves. It was not just a place for worship or celebrations.

The Acropolis was probably the location of an old Mycenaean palace, as shown in the picture above, and around the sixth century BCE was the place chosen for the government of the tyrants or kings, the Pisitratidae. The place became after that, around 500 BCE, a more religious centered space, however it was also where they kept their treasure. Then from c450 BCE to 432, Pericles (c495–429 BCE) decided to use the money from the Delian League and started a gigantic building program: the Parthenon first (completed 432 BCE), then the Erechtheum (c410–400 BCE). These two temples were dedicated to Athena.

Plutarch, in his biography of Pericles, devotes an important part to the role played by Pericles in the beautification of Athens, which as he says will bring her kleos for ever.

But that which brought most delightful adornment to Athens, and the greatest amazement to the rest of mankind; that which alone now testifies for Hellas that her ancient power and splendor, of which so much is told, was no idle fiction,—I mean his construction of sacred edifice…(Athens) should apply her abundance to such works as, by their completion, will bring her everlasting glory

There is this amusing story in Plutarch’s biography of Pericles: as he was questioned by the Athenian people about his use of the money from the Delian League, Pericles answered them that if they preferred, he would then pay with his own money but then would put his name on the buildings he paid for, among them the Parthenon of course! The Athenians said no, and approved his use of the money from the League.

Plutarch also gives a detailed account of the different materials used, of the all the craftsmen involved in the construction, and of the amazing speed with which the monuments were completed.

The materials to be used were stone, bronze, ivory, gold, ebony, and cypress-wood; the arts which should elaborate and work up these materials were those of carpenter, moulder, bronze-smith, stone-cutter, dyer, worker in gold and ivory, painter, embroiderer, embosser, to say nothing of the forwarders and furnishers of the material, such as factors, sailors and pilots by sea,…and, by land, wagon-makers, trainers of yoked beasts, and drivers. There were also rope-makers, weavers, leather-workers, road-builders, and miners…

So then the works arose, no less towering in their grandeur than inimitable in the grace of their outlines, since the workmen eagerly strove to surpass themselves in the beauty of their handicraft. And yet the most wonderful thing about them was the speed with which they rose. Each one of them, men thought, would require many successive generations to complete it, but all of them were fully completed in the heyday of a single administration….

[3] For this reason are the works of Pericles all the more to be wondered at; they were created in a short time for all time. Each one of them, in its beauty, was even then and at once antique; but in the freshness of its vigor it is, even to the present day, recent and newly wrought. Such is the bloom of perpetual newness, as it were, upon these works of his, which makes them ever to look untouched by time, as though the unfaltering breath of an ageless spirit had been infused into them…

More information is given by Plutarch in the same biography about the construction of the Parthenon.

Pheidias was the principal manager, Callicrates and Ictinus were the architects of the Parthenon. Mnesicles was the architect of the Propylaea. And finally, Pheidias was the artist who created the great golden statue of Athena. The statue shown in the picture below is twelve times smaller that the original, which was gigantic.

Pausanias has an interesting description of the Acropolis and what was in or near the Parthenon in Book 1 of his Description of Greece, especially the statue of Athena, that was in the entrance of the temple.

{1.24.5}… And now, as one enters the temple [nāos] that they name the Parthenon, all the things you see on what is called the [east] pediment [aetos] show the birth [genesis] of Athena, but on the rear [= west] pediment you see the strife [eris] between Athena and Poseidon over the ownership of the land [of Athens]. The statue [agalma] itself is made [poieîsthai] of ivory and gold. On the middle of her helmet [kranos] is placed a likeness [eikōn] of the Sphinx…{1.24.7} The statue [agalma] of Athena is standing [not seated], with a tunic [khitōn] reaching to the feet, and on her breast the head of Medusa is worked in ivory. She holds a [statue of] Nike about four cubits high, and in the other hand a spear [doru]; at her feet is placed a shield [aspis] and near the spear [doru] is a serpent [drakōn]. This serpent [drakōn] would be Erikhthonios. On the pedestal of the statue [agalma] is the birth of Pandora in relief. It has been said-in-poetry [poieîsthai] by Hesiod and others that this Pandora was the first woman; before Pandora was born there was as yet no womankind.

Pausanias also describes things that are “most of all cause-wonder [thaumazein]” about the festival and the maidens [parthenoi] who participate in the procession.

Nagy explores some of Pausanias’ descriptions in Part Three of Masterpieces of Metonymy[8]. He also gives information concerning the Acropolis and the original Peplos of the Athenian myth. He describes different parts of the Parthenon and the Frieze, especially the sculptures of Block 5 of the east side of the Parthenon Frieze, several versions of the Panathenaic Procession, examining the possible meanings of the sous -jacents/underlying myths. The appearance of the statue, described in length by Pausanias above, is reminiscent of the Homeric Athena as seen in Iliad 5.733-747 where Athena is wearing a “tunic [khitōn]”. Finally, Nagy agrees with Connelly (2014) that the Parthenon Frieze was done for the gods more than for mortals.

[7] A Pausanias Reader, Scrolls 1–10 Translation based on the original rendering by W. H. S. Jones, 1918 (Scroll 2 with H.A. Ormerod), containing some of the footnotes of Jones. The translation is edited, with revisions, by Gregory Nagy. Online at
https://nrs.harvard.edu/urn-3:hlnc.prim-src:A_Pausanias_Reader_in_Progress.2018-

Ancient Athens at the Time of Xerxes. From Abbott, Jacob History of Xerxes. 1900.  Public domain, via Wikimedia Commons

All other photos: Kosmos Media Library