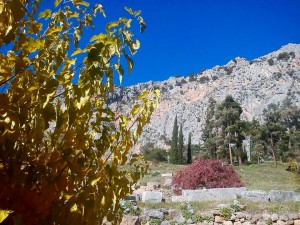 This gallery will take you to Delphi in Greece. Plutarch, who was a priest of Apollo in Delphi for several years, wrote a book about the oracles. Here are two passages from his book. Plutarch describes “the shrine of Earth” τὸ τῆς Γῆς ἱερὸν.

Accordingly we went round and seated ourselves upon the southern steps of the temple, looking towards the shrine of Earth and the stream of water, with the result that Boethus immediately remarked that the place itself proffered assistance to the visitor in the solution of the question. ‘For,’ said he, ‘there used to be a shrine of the Muses near the place where the water of the stream wells up; wherefore they used to use this water for libations and lustrations, as Simonides says:

Where from depths below, for pure lustration
Is drawn the fair-haired Muses’ fount of holy water.

And in another passage, he addresses Clio in a somewhat affected way as the ‘Holy guardian’…  they established the cult of the Muses as associates and guardians of the prophetic art in this very place beside the stream and the shrine of Earth, to whom it is said that the oracle used to belong because of the responses being given in poetic and musical measures. And some assert that it was here that the heroic verse was heard for the first time:

Birds, contribute your feathers, and bees, bring wax as your portion.

Later Earth became inferior to the god and lost her august position.’

I imagine that you are familiar with the saying found in Heracleitus to the effect that the Lord whose prophetic shrine is at Delphi neither tells nor conceals, but indicates. Add to these words, which are so well said, the thought that the god of this place employs the prophetic priestess for men’s ears just as the sun employs the moon for men’s eyes.

For this gallery, I used pictures that were shared with me by two Hour 25 participants: Euthymia who wrote a thread about her trip to Delphi here, and Laura who went there 46 years ago. Some pictures were taken inside the Archaeological Museum of Delphi.

One of Euthymia’s pictures represents Kleobis and Biton, the famous twins. A passage from the Sourcebook about them follows.

31. 1.31.1 When Solon had provoked him by referring to the things that happened to Tellos, saying that these things were many and blessed [olbia], Croesus asked him [= Solon] what person he saw as the next one after him [= Tellos], since he [= Croesus] quite expected to win second prize. Solon answered, “Kleobis and Biton. 1.31.2 They were Argive by birth [genos], and they made a living that was quite sufficient. And, on top of this, they had such great physical strength! Both were prize-winning athletes [āthlophoroi]. Here is the story that is told about them. There was a festival [heortē] of Hērā in Argos, and it was absolutely necessary for their mother [= the priestess of Hērā] to be conveyed to the sacred precinct [hieron] [of Hērā] by a team of oxen. But their oxen had not come back from the fields in time [hōrā], so the youths themselves took the yoke upon their shoulders under constraint of time [hōrā] and started pulling the wagon, with their mother riding on top of it, transporting her [their mother] forty-five stadium-lengths until they arrived at the sacred precinct [hieron] [of Hērā ]…

And the people of Argos made likenesses [eikōn plural] of them and dedicated these at Delphi, saying that these were images of men who had become the very best of men.”