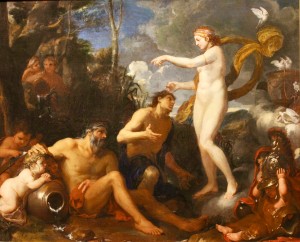 To celebrate Valentine’s day, I chose Ovid for this Gallery about Love. He was the first to write about the art of love and gallantry.

Ovid was born in 43 BCE. He was a talented poet. He was educated in Rome and traveled in Greece. He composed many beautiful works.

Ovid’s Metamorphoses was written during the Augustan period. He lived during the same period as Virgil and Horace. He was very popular, but was sent into exile by Augustus. You may find more information about Ovid in here, in Todd M. Compton, Victim of the Muses: Poet as Scapegoat, Warrior and Hero in Greco-Roman and Indo-European Myth and History, Chapter 23. “Ovid: Practicing the Stadium Fatale“.

The Metamorphoses, a long poem about mythology written in dactylic hexameter, inspired many artists, writers, painters, sculptors and musicians.

Most of the art in this gallery has been inspired by The Metamorphoses.

He wrote The Art of Love, and he was exiled by Augustus after that for obscure reasons. The Loves was first published around 18BCE. Ovid starts his poem with the same word used by Virgil at the beginning of the Aeneid  “arma” [weapons]; however, Ovid prefers love to war.

Here are two passages from his books about love.

If there be anyone among you who is ignorant of the art of loving, let him read this poem and, having read it and acquired the knowledge it contains, let him address himself to Love.

By art the swift ships are propelled with sail and oar; there is art in driving the fleet chariots, and Love should by art be guided. Automedon was a skilled charioteer and knew how to handle the flowing reins; Tiphys was the pilot of the good ship Argo. I have been appointed by Venus as tutor to tender Love.

The Art of Love 1

Translated by Julian May

My prayer is just: let the fair one who has so lately captivated my heart love me ever, or so act that I shall love her ever. Nay, but ’tis too much I ask! Only let her suffer herself to be loved. May Cytherea incline her ear to all my prayers

The Loves Elegy3, translated by Julian May

Hélène Emeriaud is a retired teacher.  A Community TA for HeroesX in v3 v4,and v5, she enjoys being a participant in Hour 25.