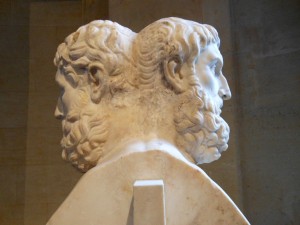 In this Gallery, you will see some familiar people from the past. Writers, heroes, politicians, philosophers, among them: Pittacus, Epicurus, Socrates, Pericles, Alexander the Great, Cesar, Augustus… Are also present Zeus and his wife Hera (or Juno), Medusa, and don’t be scared to look at her…

If you want to know more about these famous people, Plutarch wrote many biographies. Among them, he offers a long, and beautiful physical description of Alexander the Great, and a small one of Demosthenes.

The outward appearance of Alexander is best represented by the statues of him which Lysippus made, and it was by this artist alone that Alexander himself thought it fit that he should be modelled. For those peculiarities which many of his successors and friends afterwards tried to imitate, namely, the poise of the neck, which was bent slightly to the left, and the melting glance of his eyes, this artist has accurately observed.

[2] Apelles, however, in painting him as wielder of the thunderbolt, did not reproduce his complexion, but made it too dark and swarthy. Whereas he was of a fair colour, as they say, and his fairness passed into ruddiness on his breast particularly, and in his face. Moreover, that a very pleasant odour exhaled from his skin and that there was a fragrance about his mouth and all his flesh, so that his garments were filled with it, this we have read in the Memoirs of Aristoxenus.

For from the first he was lean and sickly, and his opprobrious surname of Batalus is said to have been given him by the boys in mockery of his physique.

Diogenes Laertius also wrote many biographies. He wrote about Pittacus, one of the Seven Sages of Greece, and about Epicurus, and Metrodorus in his Lives of Eminent Philosophers.

Pittacus was the son of Hyrrhadius and a native of Mitylene…

Alcaeus nicknamed him σαράπους and σάραπος because he had flat feet and dragged them in walking; also “Chilblains,” because he had chapped feet, for which their word was χειράς; and Braggadocio, because he was always swaggering; Paunch and Potbelly, because he was stout; a Diner-in-the-Dark, because he dispensed with a lamp; and the Sloven, because he was untidy and dirty. The exercise he took was grinding corn, as related by Clearchus the philosopher.

Epicurus, son of Neocles and Chaerestrate, was as citizen of Athens of the deme Gargettus, and, as Metrodorus says in his book On Noble Birth, of the family of the Philaidae.  D. L. 10.1 on Perseus

Hélène Emeriaud is a retired teacher. A Community TA for HeroesX in v3 v4,and v5, she enjoys being a participant in Hour 25.