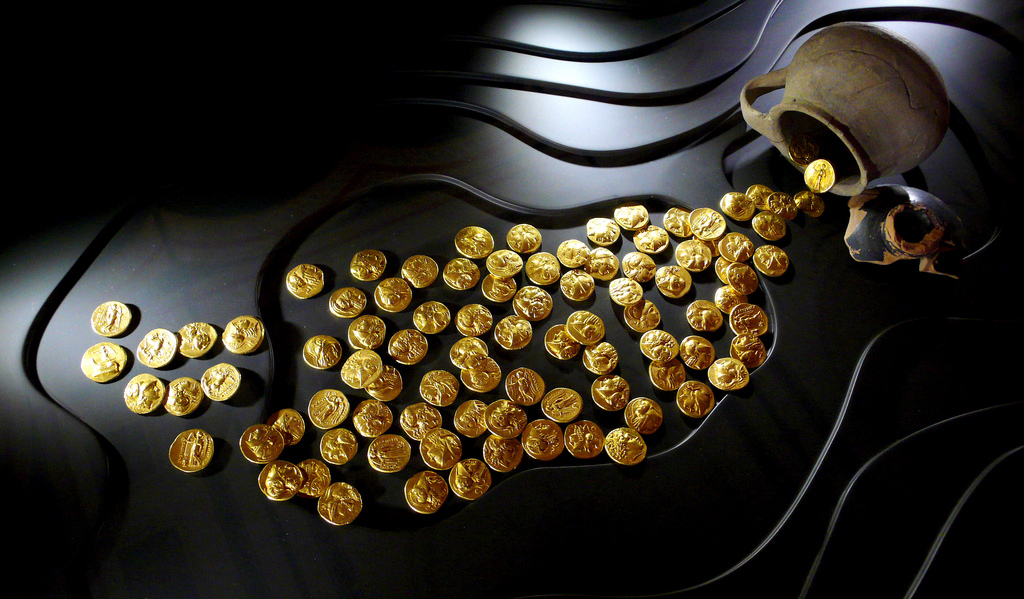 Gold: a precious metal that seems to shine like the sun, and does not tarnish or rust. No wonder it is associated with the gods.

We see this when the gods meet:

Now the gods were sitting with Zeus in council upon the golden floor while the goddess Hebe went round pouring out nectar for them to drink, and as they pledged one another in their cups of gold they looked down upon the town of Troy.
(Iliad 4.1–4)
The two goddesses [=Athena and Hera] then sat down upon their golden thrones, amid the company of the other gods; but they were very angry. Presently father Zeus drove his chariot to Olympus, and entered the assembly of gods.
[440] The mighty lord of the earthquake unyoked his horses for him, set the car upon its stand, and threw a cloth over it. Zeus of the wide brows then sat down upon his golden throne
(Iliad 8.436–442)

Athena’s aegis and helmet are also made of gold:

Athena went among them holding her priceless aegis that knows neither age nor death. From it there waved a hundred tassels of pure gold, all deftly woven, and each one of them worth a hundred oxen.
(Iliad 2.447-449)
On her head she set her helmet of gold, with four plumes, and coming to a peak both in front and behind, decked with the emblems of a hundred cities.
(Iliad 5.742–744)

The gods’ chariots are made of gold and silver:

Hera, the august goddess, daughter of great Kronos, began to harness her gold-bedizened steeds. Hebe with all speed fitted on the eight-spoked wheels of bronze that were on either side of the iron axle-tree. The spikes of the wheels were of gold, imperishable,
[725] and over these there was a tire of bronze, wondrous to behold. The naves of the wheels were silver, turning round the axle upon either side. The car itself was made with plaited bands of gold and silver, and it had a double top-rail running all round it. From the body of the car there went a pole of silver,
[730] on to the end of which she bound the golden yoke, with the bands of gold that were to go under the necks of the horses.
(Iliad 5.720–732)

…he [=Zeus] yoked his fleet horses, with hooves of bronze and manes of glittering gold. He girded himself also with gold about the body, seized his gold whip and took his seat in his chariot.
(Iliad 8.42–44) 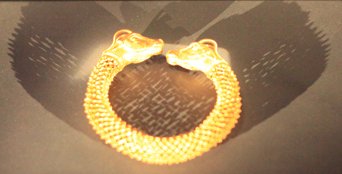 When we find it associated with humans, it seems to denote a very special hero, for example, in the way Rhesus is described:

His chariot is bright with silver and gold, and he has brought his marvelous golden armor, of the rarest workmanship—
[440] too splendid for any mortal man to carry, and meet only for the gods.
(Iliad 10.438–440)

At the house of Menelaos and Helen, Telemakhos is impressed with everything:

“Look, Peisistratos, son of Nestor, man after my own heart, see the gleam of bronze and gold—of amber, ivory, and silver. Everything is so splendid that it is like seeing the palace of Olympian Zeus.
[75] I am lost in admiration.” Menelaos of the fair hair overheard him and said, “No one, my sons, can hold his own with Zeus, for his house and everything about him is immortal; but among mortal men—
[80] well, there may be another who has as much wealth as I have, or there may not…
(Odyssey 4.71–80)

Odysseus is similarly impressed with the palace of Alkinoos and Arete:

he pondered much as he paused a while before reaching the threshold of bronze,
[85] for the splendor of the palace was like that of the sun or moon. The walls on either side were of bronze from end to end, and the cornice was of blue enamel. The doors were gold, and hung on pillars of silver that rose from a floor of bronze,
[90] while the lintel was silver and the hook of the door was of gold. On either side there stood gold and silver mastiffs which Hephaistos, with his consummate skill, had fashioned expressly to keep watch over the palace of great-hearted king Alkinoos; so they were immortal and could never grow old.
[95] Seats were ranged all along the wall, here and there from one end to the other, with coverings of fine woven work which the women of the house had made. Here the chief persons of the Phaeacians used to sit and eat and drink, for there was abundance at all seasons;
[100] and there were golden figures of young men with lighted torches in their hands, raised on pedestals, to give light by night to those who were at table.
(Odyssey 7.84–102)

In the Hesiodic Works and Days there is another association of humans and gods with gold:

the gods and mortal humans have the same origins.
In the very beginning, a Golden Generation of shining-faced humans
110 was made by the immortals who abide in Olympian homes.
….
They lived like gods, having a thūmos without anxieties,
without labor and woe. Nor did wretched old age
weigh upon them. Their feet and hands did not change,
115 and they had good times [verb terpesthai] at feasts [thaliai], exempt from all evils.
And when they died, it was as if they were overcome by sleep. All manner of good things [esthla]
belonged to them. And the grain-giving [root dōr-] earth, without prompting,
bore produce aplenty. And they, placidly
and in serenity [hēsukhiā], lived off their fields, amidst much material wealth.
120 They were rich in flocks, philoi to the blessed gods.
122 And they [= the Golden Generation of humankind] are superhumans [daimones].
They exist because of the Will of Zeus.
123 They are the good, the earthbound [epi-khthonioi], the guardians of mortal humans.
124 They guard acts of justice [dikē] and they guard against wretched acts of evil.
125 Enveloped in mist, they roam everywhere throughout the earth.
126 They are givers of prosperity.
(Hesiod Works and Days 108–126)

There are very many golden items mentioned in the texts, from cups to sandals, from distaffs to bowstrings, and as wealth in general—in connection with gods and with humans. Personally, I love these passages, not because I’m greedy for the riches associated with gold, but because the descriptions are so vivid, and so beautiful.

I hope others will join in the forum to share other ‘golden moments’ from the texts.

All translations from The Ancient Greek Hero in 24 Hours: Sourcebook.

___
Sarah Scott is an editor and technical author living in Scotland. She has a lifelong love of language, learning, and literature.