How did the ancient Greeks view hair? There are many passages in which it is mentioned or described, and this series of blog posts will explore different aspects of how it is featured in some of the texts. In this first post, we are looking at physical descriptions of men’s hair.

Right from the beginning of the Iliad we see the hair of Achilles featured as part of the action during his quarrel with Agamemnon, when he is uncertain about whether to kill Agamemnon or to check his anger:

While he was thus of two minds, and was drawing his mighty sword from its scabbard, Athena came down [195] from the sky (for white-armed Hera had sent her in the love she bore for them both), and seized the son of Peleus by his golden [xanthē] hair [komē], visible to him alone, for of the others no man could see her.
Iliad 1.193–198, adapted from Sourcebook[1] 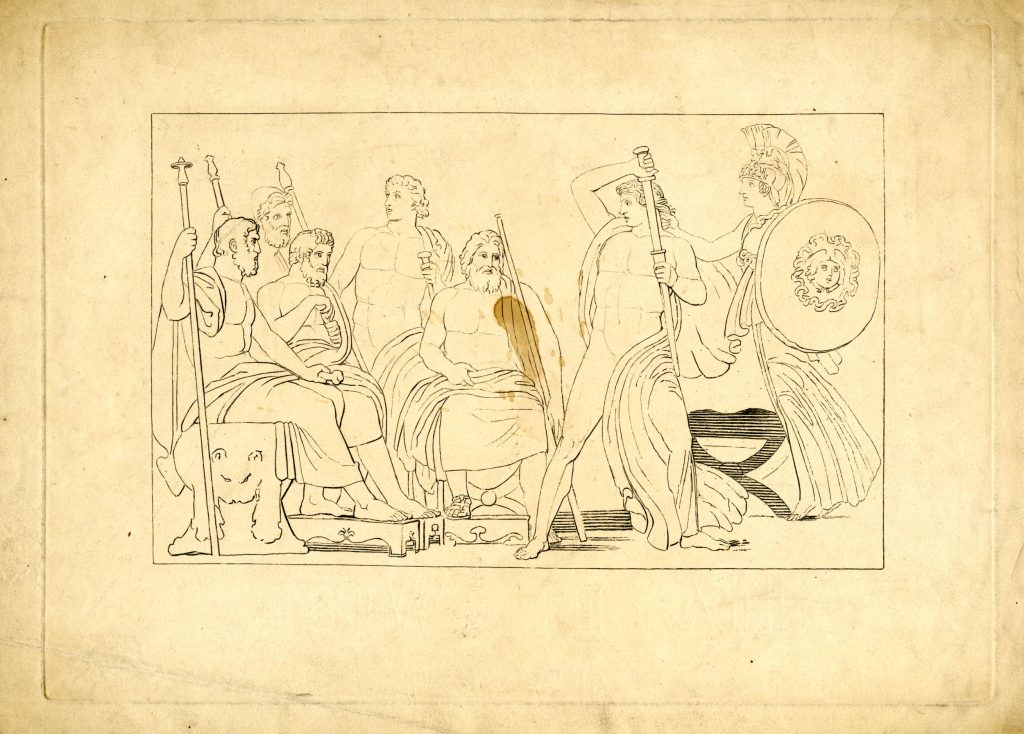 We have a further description of Achilles’ hair, based on the Vinedresser’s account of how Protesilaos describes it:

Achilles’ hair [komē] is thick [amphilaphē], lovelier than gold [khrusos], and becoming [euskhēmōn] no matter where and how either the wind or he himself may move it.
Philostratus On Heroes 48.2, adapted from the translation by Ellen Bradshaw Aitken and Jennifer Berenson Maclean[2]

The Vinedresser describes Protesilaos himself:

he has a full, splendid beard and smells sweeter than autumn myrtles. Cheerful eyebrows frame his eyes, which gives him a pleasant, friendly manner. When he exerts himself, he looks intense and determined. But if we meet him at ease, ah, how lovely and friendly his eyes appear! [§10.3] He has blond [xanthē] hair [komē] of moderate length. It hangs a little over his forehead rather than covering it.
Philostratus On Heroes 10.2, adapted from the translation by Ellen Bradshaw Aitken and Jennifer Berenson Maclean

Odysseus also has blond or yellow hair as we see after he has arrived on Ithaka, when Athena explains to Odysseus how she is going to change his appearance and make him look older and unattractive:

“Trust me for that,” said she, “I will not lose sight of you when once we set about it, and I would imagine that some of those who are devouring your substance will then [395] bespatter the pavement with their blood and brains. I will begin by disguising you so that no human being shall know you; I will cover your body with wrinkles; you shall lose all your yellow [xanthē, pl.] hair [thrix, pl.]; I will clothe you [400] in a garment that shall fill all who see it with loathing; I will blear your fine eyes for you, and make you an unseemly object in the sight of the suitors, of your wife, and of the son whom you left behind you.
Odyssey 13.393–404, adapted from Sourcebook

With that loss of hair, it is reminiscent of the unfavorable appearance of Thersites: “Thersites “His head ran up to a point, but there was little [psendē] hair [lakhnē] on the top of it.”(Iliad 2.218–219)

When Athena restores Odysseus, his appearance is better than ever:

Athena made him look taller and stronger than before; she also made the hair [komē, pl.] grow thick on the top of his head, and flow down in curls [oulē, pl.] like hyacinth [huakinthos] blossoms [anthos]; she shed kharis about his head and shoulders…
Odyssey 23.156–158, adapted from Sourcebook 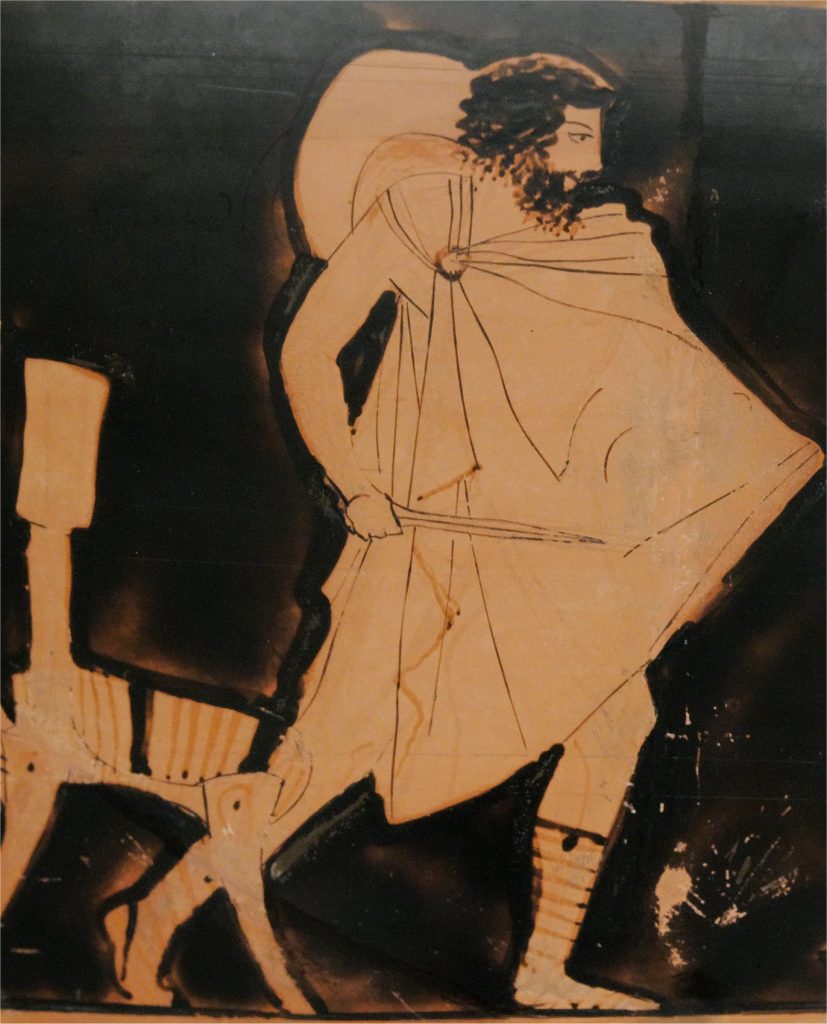 It seems that abundant, curly hair was particularly attractive. But not to excess…

Menelaos wore his hair [komē] boyishly long, as was the Spartan custom, and the Achaeans made allowance for him when he was visiting, since they did not mock those who came from Euboea even though their hair was ridiculously long [komaō= verb from komē].
Philostratus On Heroes 29.5, adapted from the translation by Ellen Bradshaw Aitken and Jennifer Berenson Maclean

Not all heroes or gods have blond hair. Here are some examples:

1 About Dionysus son of most glorious Semele 2 my mind will connect, how it was that he made an appearance [phainesthai] by the shore of the barren sea 3 on a prominent headland, looking like a young man 4 at the beginning of adolescence. Beautiful were the locks of hair [etheira, pl.] as they waved in the breeze surrounding him. [5] They were the color of deep blue [kuaneai ].
Homeric Hymn 7 to Dionysus, adapted from Sourcebook 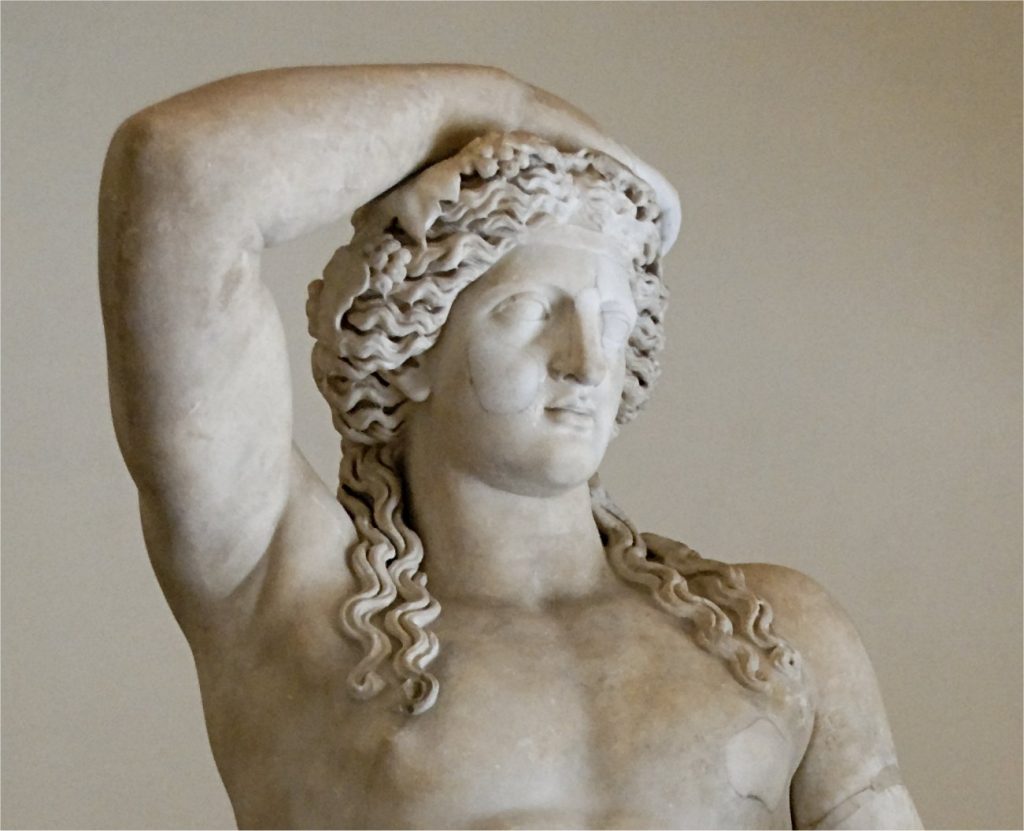 Again we see luxuriant hair, typical of a youthful and beautiful appearance. However, it is not a stereotype since some heroes have different styles of hair:

Sthenelos is of a good size and towering, gray-eyed, with an aquiline nose, fairly long-haired [komaō = verb from komē], ruddy, and hot-blooded. He [= Protesilaos] describes Diomedes as steadfast and having eyes that are blue-gray and not black at all and a straight nose; his hair [komē] was woolly [oulē] and dirty [= with aukhmos].
Philostratus On Heroes 27.12, adapted from the translation by Ellen Bradshaw Aitken and Jennifer Berenson Maclean 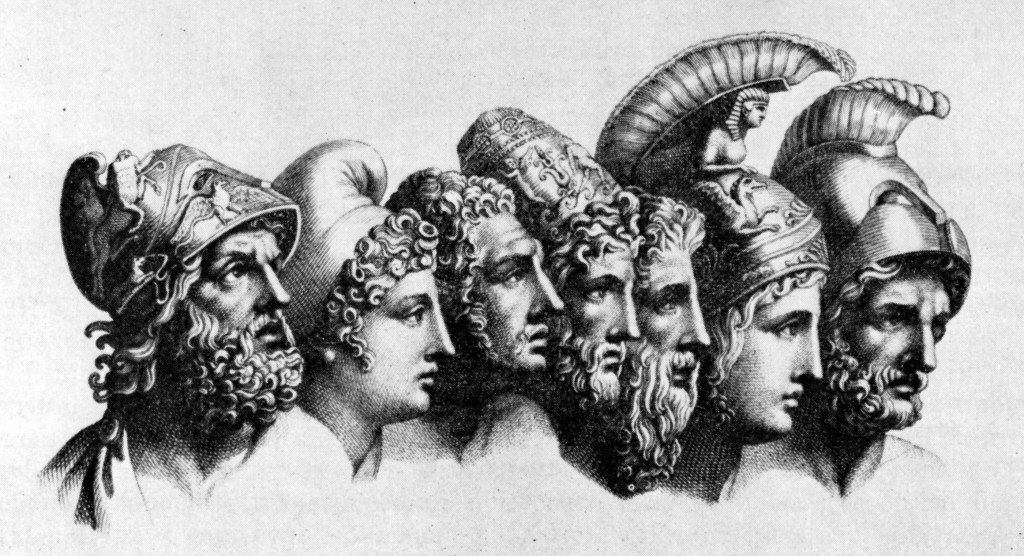 We know the warriors wore helmets, but did their hair show beneath it if they wore it long? These passages provide some evidence that it might have:

Menelaos struck him [= Euphorbos] about the roots of his throat, leaning his whole weight on the spear, so as to drive it home. The point went clean through his neck, [50] and his armor rang rattling round him as he fell heavily to the ground. 51 With blood bedewed was his hair [komē, pl.] looking like myrtle-blossoms [kharites], 52 with the curls [plokhmoi] and all so deftly bound [sphēkoō] in bands of silver and gold.
Iliad 17.46–52, adapted from Sourcebook

Archemachus the Euboean says that the Curetes settled at Chalcis, but since they were continually at war for the Lelantine Plain and the enemy would catch them by the front hair [komē] and drag them down, he says, they let their hair grow long [komaō] behind but cut short [keirō] the part in front, and because of this they were called “Curetes,” from the cut [koura] of their hair
Strabo Geography 10.3.6, on Perseus

There are practical reasons for adopting this style during times of war. We will return to other reasons for hair-cutting in part 3 of this series.

Meanwhile, please join the discussion in the forum. What other passages can you find that describe the appearance of men’s hair? And is the description favorable, derisory, or neutral in tone? What differences are there between gods, heroes, young men, and old men? In what situations do the texts tell us about the god’s or man’s hair? To what extent would you characterize the descriptions as realistic or as stylized? What other Greek terms for different types of hair can you find?