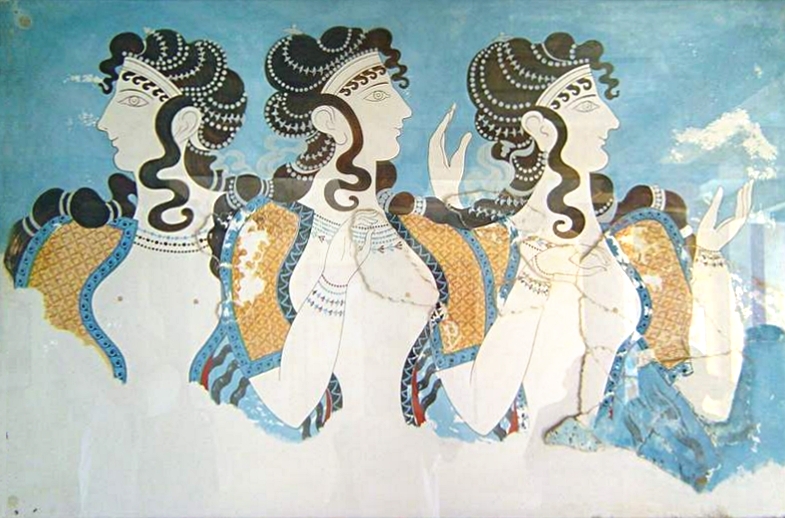 In the previous posts, we considered descriptions of male and female hair, and rituals associated with hair. In this post we consider epithets related to hair.

We referred to Milman Parry Studies in the Epic Technique of Oral Verse-Making: I. “Homer and Homeric Style” for a definition and description of epithets:

In my study of the traditional epithet in Homer, I dealt with those formulas in the Iliad and in the Odyssey which are made up of a noun and one or more fixed epithets, and showed that they were created to help the poet set the heroic tale to hexameters. The noun has a metrical value which allows little change, but by adding to it an ornamental epithet one can make a phrase of the needed length which, since the epithet has no bearing on the idea of the sentence, can be used as freely as the simple noun. I also showed that the technique of the use of the noun-epithet formulas is worked out to so fine a point that it could be only for the smallest part due to any one man. Unless the language itself stands in the way, the poet [2] or poets of the Homeric poems has—or have—a noun-epithet formula to meet every regularly recurring need. And what is equally striking, there is usually only one such formula. An artifice of composition of this variety and of this thrift must have called for the long efforts of many poets who all sought the best and easiest way of telling the same in of stories in the same verse-form.[1]

Hair, curls, and locks are distinctive features of feminine beauty. Women have “lovely tresses”; “lovely hair.” When Hera is preparing to seduce Zeus in Book 14, the poet emphasizes this point (Iliad 14.175–177):

With this she anointed her delicate skin, and then she plaited the fair ambrosial locks that flowed in a stream of golden tresses from her immortal head.

To characterize female figures, the poet evokes their hair, and Helen, the emblem of femininity, is labeled seven times as “lovely-haired Helen” (3.329, etc.). [6] Still, descriptions of hair are quite imprecise: there is hardly any information about its color or any criteria for judging what makes it “lovely” (shine, length, etc.).[2] 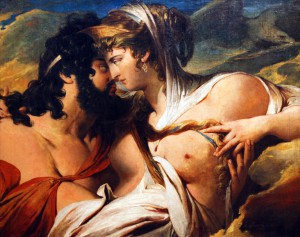 He further explains that most epithets (including those relating to hair) are generic, (although Helen does have three other epithets specific to her alone).[3]

In this post we will look at a few examples in context. 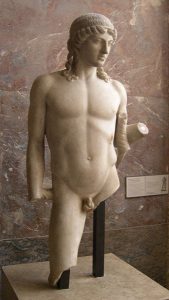 One of the more common generic epithets in the Iliad is κάρη κομόωντeς [karē komoōntes] “having let the hair grow long on the head,” often translated as “flowing-haired”; this phrase usually of Achaeans. In several of the passages the context when this phrase is used is in connection with feasts, burials, fighting particularly between Hector, Patroklos, and Achilles. This could remind an audience of the scene at the funeral of Patroklos when Achilles cuts off his hair, as discussed in the post “part 3: Rituals with hair”. Here is one example when Nestor gives advice about burying the dead and building a wall for protection:

Son of Atreus, and other chieftains, inasmuch as many of the flowing-haired [karē komoōntes] Achaeans are now dead, whose blood Arēs has shed by the banks of the Skamandros, [330] and their spirits [psūkhai] have gone down to the house of Hādēs, it will be well when morning comes that we should cease fighting; we will then wheel our dead together with oxen and mules and burn them not far from the ships
Iliad 7.327–334, adapted from Sourcebook

Nicole Loraux has referred to names as “micro-récits“, micronarratives, and Gregory Nagy has extended this to refer to epithets.[4] So might this be an example of how an epithet can be “unpacked” as a micro-narrative?

To take another example, the epithet ἰόπλοκος (or ἰοπλόκαμος) “with violet hair” is used of the Muses and of Euadne in Pindar. Here we might see how such an epithet has resonance with another part of the story as told in Olympian 6:

Later in the poem Euadne gives birth to a son by Apollo; she leaves her son on the ground but “by the will of the gods, two gray-eyed serpents nurtured him with the harmless venom of bees [= honey], caring for him.” The word for “the venom” is ἰός [ios] but the word for “violet” is ἴον [ion] so there is an ambiguity and play on words here. In the same poem the epithet ὁ Χρυσοκόμας “the Golden-haired” is used to refer to Apollo although he is not named explicitly in this line. Still later the poem explains that the baby

had been hidden in the rushes and the boundless thicket, [55] his tender body washed in the golden and purple light of violets [ion plural]. Therefore his mother declared that he should be called for all time by this immortal name, “Iamus.”
Olympian 6.53–57, adapted from translation by Diane Arnson Svarlien 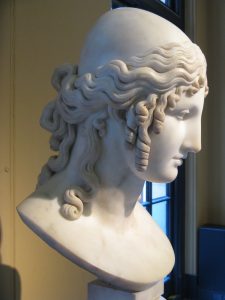 Looking at generic examples, as mentioned by Parry and Monsacré we did indeed find eukomos “lovely-haired” is applied to many women, for example in this line describing Helen:

Similarly euplokamos “with goodly locks, fairhaired” as in this line describing Calypso:

…gods brought me to the Ogygian island where the great goddess Kalypsō of ordered hair [euplokamos] [255] lives.
Odyssey 7.253–255, adapted from Sourcebook

It is used also of others: Artemis (Odyssey 20.80), Demeter (Odyssey 5.125), Circe (Odyssey 10.133) and Dawn (Odyssey 10.144), Doris (Theogony 241), for example. When applied to goddesses it suggests an ideal beauty; but for mortal women might the epithet serve as a reminder in some contexts that they have the potential to to let down their hair in lament, or to be pulled by the hair when they are attacked or captured, as we saw in “Hair | Part 2: Women’s hair”?

One case in point might be in Euripides’ Iphigenia in Aulis when the Chorus sings:

Tell me, who will pluck me away from my ruined country, tightening his grasp on lovely tresses [euplokamos komē] till the tears flow?[7]

And maybe it is hinted at when Odysseus encounters Nausicaa and her companions playing ball on the beach:

Even so Odysseus was about to enter the company of the fair-tressed [euplokamos pl.] maidens, naked though he was, for need had come upon him. But terrible did he seem to them, all befouled with brine, and they shrank in fear,
Odyssey 6.135–137, adapted from translation by A.T. Murray[8] 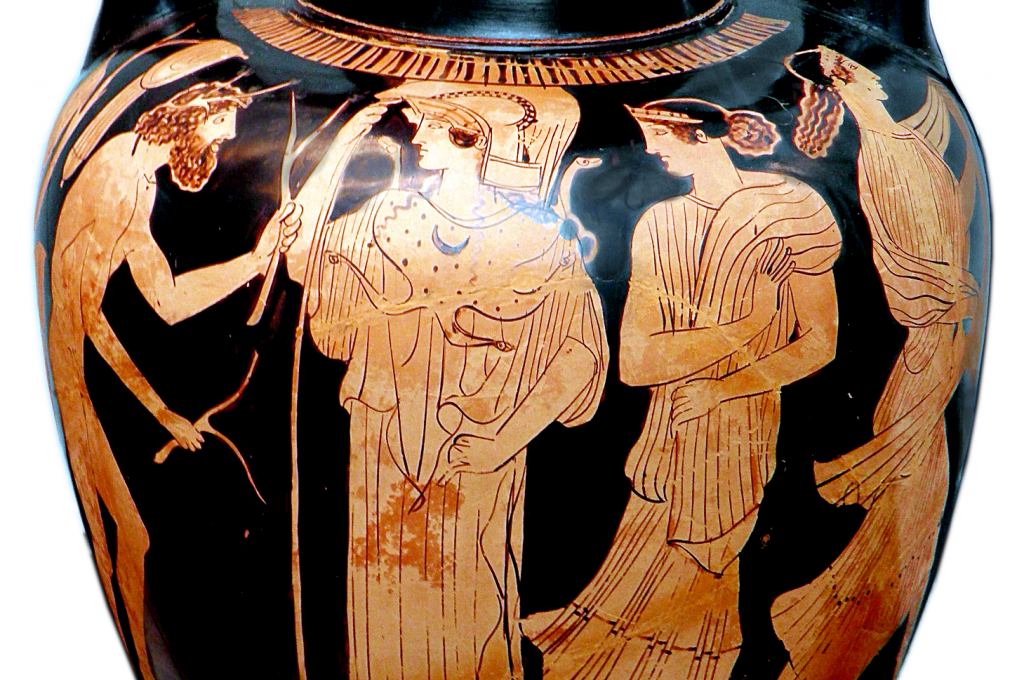 Another epithet is kallikomos: in these examples it is used of heroines:

As he spoke day began to break, and Menelaos of the great war cry, who had already risen, leaving sweet-haired [kallikomos] Helen in bed, came towards them.
Odyssey 15.59, adapted from Sourcebook 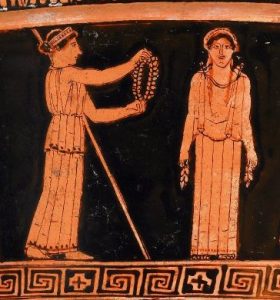 and the Hōrai, 75 with their beautiful hair [kallikomoi], plaited springtime garlands around her [= Pandora’s] head.
Hesiod Works and Days, adapted from Sourcebook

Many of these epithets are made up of compound words; others are a combination of two or more words. Here is one example of the latter, given by Parry, when he explains how two epithets can be combined:

We also find through searches on Perseus that in Homeric epic ξανθὸς [xanthos] “blond/fair” on its own is applied usually to Menelaos but also for example to Achilles, Meleagros, Rhadamanthus … so it is most often applied to men, but also to Demeter and Agamede. We did not search on other texts: is it applied elsewhere, and if so, to whom?

If you have some Greek, maybe you would like to search for examples from the list below to see where they occur, who they apply to, and what is happening in context. If you are using translations, you could track where individuals or groups are referred to with hair-related terms (although translators might render individual terms inconsistently in English, or might use the same translation to cover more than one Greek term), and again look at the specific context and at the overall stories of the individuals described in this way. Might any of the epithets relate to specific incidents? Is there any pattern to who is referred to in this way? Are there more hair epithets for men or women, mortals or immortals? Can you find other examples that are not in this list? Join us in the forum to continue this exploration of hair!

Here are a number of hair epithets, taken both from the passages we quoted above, and based on other searches using online corpora. Terms for hair and descriptions featured in this post are summarized from definitions in LSJ and/or Autenrieth, on Perseus, or from Montanari, Franco The Brill Dictionary of Ancient Greek.

[4] Mentioned, for example, in this video discussion about Achilles in the Iliad and Odyssey. We are grateful to Leonard Muellner and Gregory Nagy for supplying the original citation: N. Loraux, “Poluneikës epônumos: le nom des fils d’Œdipe, entre épopée et tragédie,” in Métamorphoses du mythe en Grèce ancienne, edited by C. Calame, Genève 1988, 151–16. This work was not consulted in the preparation of this post.

Note: Images have been selected from pictures that are freely available with open source or Creative Commons licenses or from photographs sent in by community members for the purpose. The images in this post are intended to suggest the subject, rather than illustrate exactly—as such, they may be from other periods, subjects, or cultures. Attributions are based where possible by those shown by museums, or on Wikimedia Commons, at the time of publication on this website. Texts and images accessed May 2018.
_________________
Hélène Emeriaud, Janet Ozsolak, and Sarah Scott are members of the Kosmos Society.