Aethra, the mother of Theseus, was a minor character in Greek mythology, but she was a minor character in several major events. This post is an attempt to highlight a mortal woman whose life was almost epic in scope. We will get a peek at her time after time as we follow her life along the mythic timeline. Aethra attended when Paris met Helen. She cowered nearby when the sword fell from Menelaus’ hand and Helen welcomed him back into her bosom. Aethra raised Helen, raised Theseus, and raised her own great-grandson.  She was a princess in Greece and a slave in Asia Minor. Like Nestor, she witnessed three generations of men come and go upon the face of the earth.

Aethra’s first mention in Greek myth is as the daughter of Pittheus. Her father was the king of Hyperaea and Anthea, which he merged into a new city, called Troezen in honor of his brother. (Pausanius 2.30.9) So surely she was once a beautiful princess made more beautiful by the fact that she was her father’s sole heir. (Her sister Henioche doesn’t seem to get mentioned much.) (Plutarch, Life of Theseus 25.4) As a matter of fact, Bellerophon, the hero made famous by also riding about on the winged horse Pegasus, courted and became engaged to Aethra. (Pausanius 2.31.9) But prior to the marriage he “accidentally” killed a kinsman and went into exile. (Apollodorus Library 2.3.1)

Aethra’s first real appearance in the Greek mythic timeline as a more significant character is her introduction to King Aegeus of Athens.

As no child was born to him [Aegeus], he feared his brothers and went to Pythia and consulted the oracle concerning the begetting of children. The god answered him: “The bulging mouth of the wineskin, O best of men, loose not until thou has reached the height of Athens.” Not knowing what to make of the oracle, he set out on his return to Athens.
And journeying by way of Troezen, he lodged with Pittheus, son of Pelops, who, understanding the oracle, made him drunk and caused him to lie with his daughter Aethra.
(Apollodorus, Library 3.15.6–7)[1]

The goddess Athena, the patroness of Athens, sent Aethra a dream. Following her instructions, or maybe due to the heat, Aethra left the sleeping Aegeus and waded into the sea toward another sexual encounter.

The moonlight wrestled with the ripples as she moved. She splashed water on herself and giggled in response. The island across the shallows echoed with laughter. Pausanias says this was the island of Sphaeria that lay close to Troezen’s shore. There she poured a libation to the charioteer of her grandfather Pelops. (Pausanias 2.33.1) Cillus’ real name, according to a tradition from Troezen, was Sphaerus. His tomb was shown near the town of Cilla in the neighborhood of the temple of Apollo. (Pausanias 5.10.7; Strabo 13.1.62) Aethra bedded the sea-god Poseidon that night. Afterwards she named the island Sphaeria Hiera (sacred) and had a temple built there to the goddess Athena Apaturia. She established the custom in Troezen that girls dedicated their girdles to Athena when they got married. Now Aethra’s son was heir to the thrones of Troezen, Athens, and the islands of Sphaeria and Kalavria. (Pausanias 2.33.1) 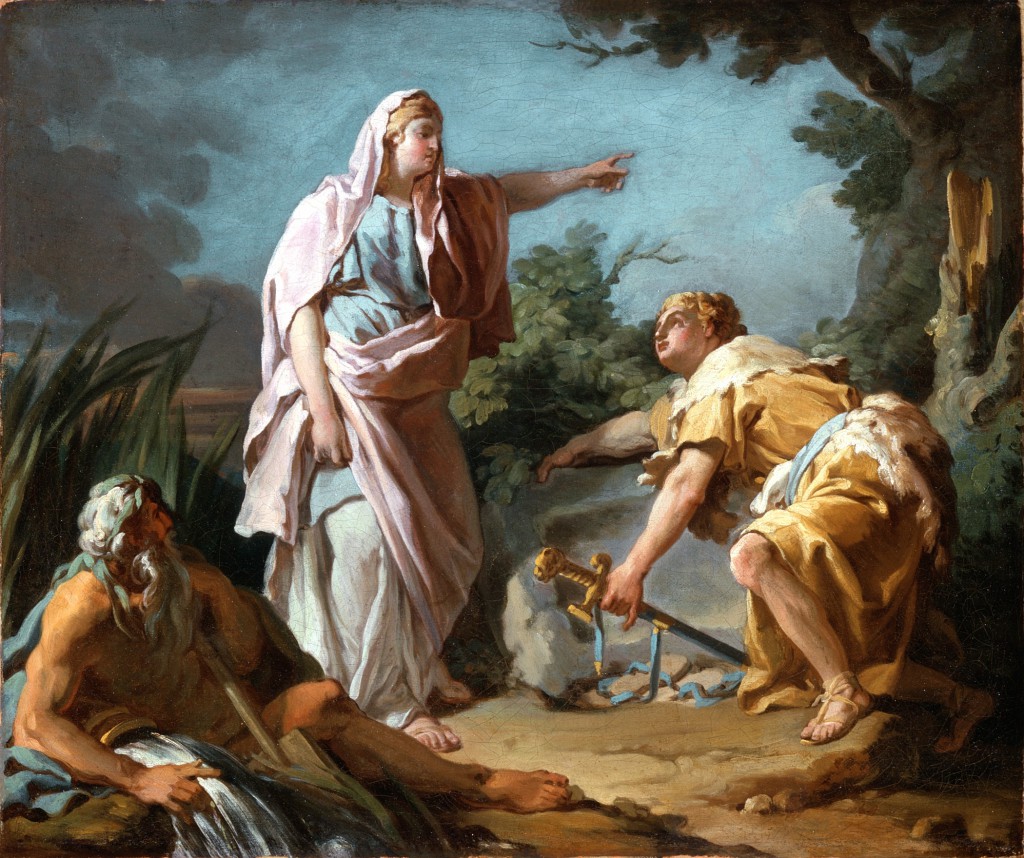 According to Hyginus, years later when the product of those unions, Theseus, reached maturity, Aethra showed him a huge rock. It served as a primitive altar to Strong Zeus. There the tokens his mortal father left behind were hidden, the proof of Theseus’ birthright. (Hyginus Fabulae 38) At some point Aethra bore a daughter “ox-eyed” Clymene, thus half-sister to Theseus. (Dictys Cretensis 6.2)

According to Plutarch, Aethra reappears in the mythic storyline thirty years later when Theseus and his best friend Peirithoos decided they needed new wives. They decided they deserved daughters of Zeus. For Theseus, the two heroes carried off Helen, daughter of Tyndareus, the most beautiful woman ever born on earth. For Peirithoos’ bride they chose Persephone, who was queen in Hādēs. Clearly there was some unmixed wine involved in this decision making. While they were gone on this expedition, Theseus handed the under-age Helen off to his mother Aethra’s care. He set them up in ancient Aphidna, which was one of the twelve ancient towns of Attica. Theseus and Peirithoos spent much longer in Hādēs than expected. (Plutarch, Life of Theseus 31.1–2)

Here Aethra began her Hecate-like existence as foster-mother, companion and slave to Helen. Pausanias tells us that shortly after Theseus’ departure, Helen’s brothers (the Dioscuri) came to her rescue with the Spartan army. When the city of Aphidna fell, Castor and Polydeuces brought Helen back to Sparta, with Theseus’ mother Aethra and Aethra’s daughter Clymene as slaves. According to Pausanias’ description of the chest of Cypselus:

Aethra, the daughter of Pittheus, lies thrown to the ground under the feet at Helen. She is clothed in black, and the inscription upon the group is an hexameter line with the addition of a single word: ‘The sons of Tyndareus are carrying off Helen, and are dragging Aethra from Athens.’
(Pausanias 5.19.3)[2]

Aethra reappears after Helen reaches marriageable age, weds Menelaus and raises a young daughter. When Alexander arrives at Sparta, Ovid quotes Helen referring to, “Aethra and Clymene, my faithful companions and counselors.” Ovid suggests they aided in her elopement (The Epistles of Ovid, Helen to Paris). They accompanied Helen to Troy. Homer mentioned Aethra and Clymene accompanying Helen to the Scaean Gate (Iliad III 139).

Aethra’s grandson Acamas was sent along with other ambassadors prior to the launch of the “thousand ships” to demand the surrender of Helen. During his stay at Troy, Acamas won the affection of Laodice, daughter of Priam and begot by her a son, Munitus. Munitus was raised by his great-grandmother Aethra. (Parthenius of Nicaea, Erotica Pathemata 16)

Pausanias offers a glimpse of Aethra ten years later when Troy fell. Aethra snuck to the Greek camp and was recognized by her grandsons Demophon and Acamas—even with a shaven head. With Helen’s approval, Agamemnon released Aethra and her daughter from bondage. (Pausanias 10.25.7–8) They returned home where the Athenians welcomed “Aethra, the daughter of Pittheus, and her daughter Clymene.” (Dictys Cretensis 6.2)

Nicolas-Guy Brenet Aethra Showing her Son Theseus the Place Where his Father had Hidden his Arms, 1768, LACMA Image Library LACMA
___