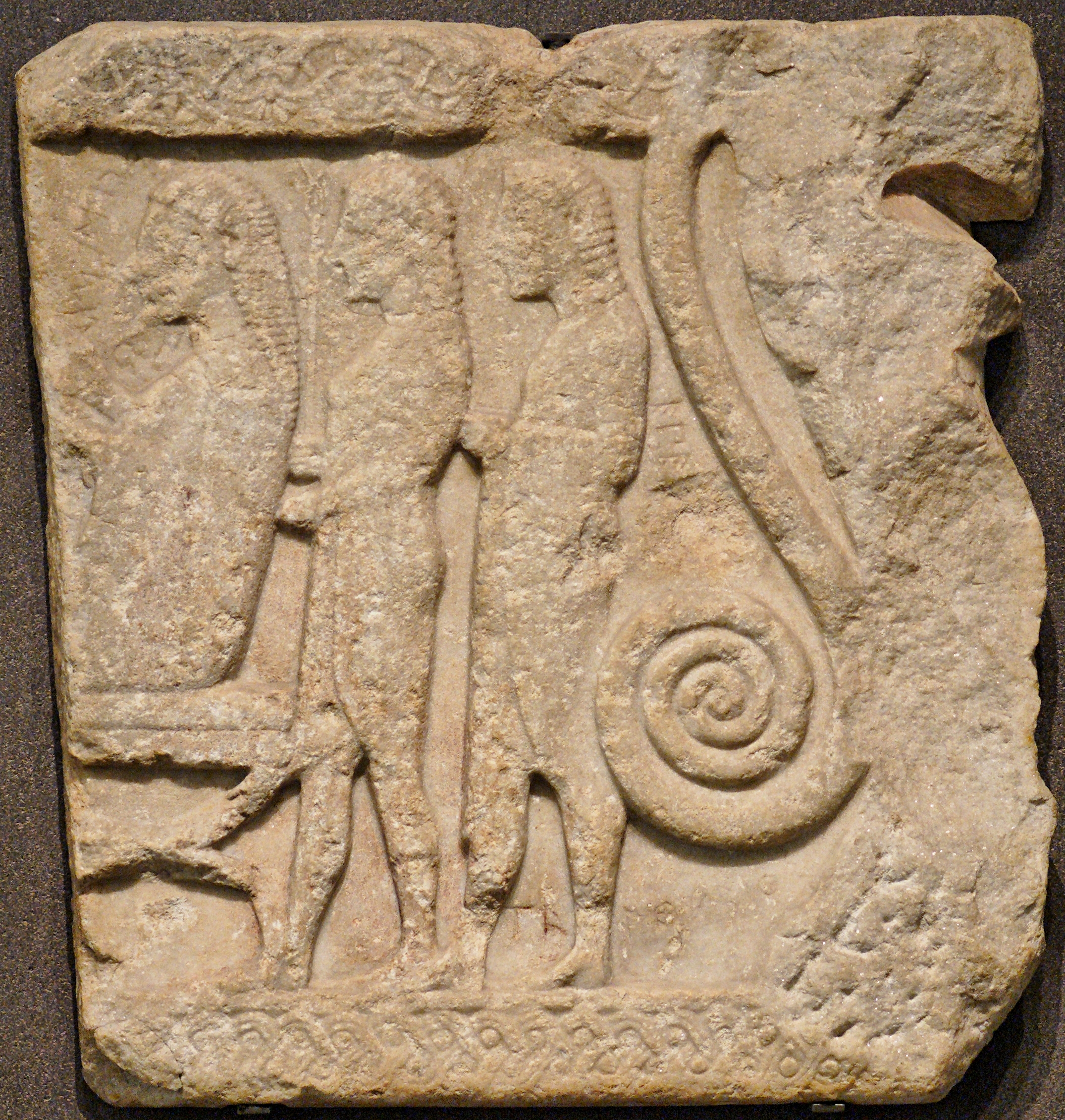 I have become interested in the role of the herald. Does this carry a special status and have particular responsibilities? Is a herald the same as a messenger, or do they have separate functions? They are different words in Greek, κῆρυξ, plural κήρυκες, dual κήρυκε [kērux, kērukes, keruke], and ἄγγελος plural ἄγγελοι [angelos, angeloi].

Here are a few examples to start the conversation.

But Agamemnon did not forget the threat that he had made Achilles, [320] and called his trusty pair of heralds [kēruke] and attendants [theraponte] Talthybios and Eurybates. “Go,” said he, “to the tent of Achilles, son of Peleus; take fair-cheeked Brisēis by the hand and bring her here; if he will not give her I shall come [325] with others and take her—which will press him harder.” He ordered this directly and dismissed them, whereon they went their way sorrowfully by the seaside, till they came to the tents and ships of the Myrmidons. They found Achilles sitting by his tent and his ships, [330] and ill-pleased he was when he beheld them. They stood fearfully and reverently before him, and never a word did they speak, but he knew them and said, “Welcome, heralds [kērukes], messengers [angeloi] of gods and men; [335] draw near; my quarrel is not with you but with Agamemnon who has sent you for the girl Brisēis. Therefore, Patroklos, bring her and give her to them, but let them be witnesses by the blessed gods, by mortal men, [340] and by the fierceness of hard-hearted Agamemnon’s anger, that if ever again there be need of me to save the people from ruin, they shall seek and they shall not find….”
(Iliad 1.318–342, adapted from Sourcebook)

The two men summoned by Agamemnon seem to have a role both as heralds and as attendants. Interestingly when Agamemnon summons them, the words for heralds and attendants are actually in the dual form (kēruke and theraponte): they are very much seen as a pair here. Is the number important?

I had thought the heralds would have to be treated with respect when they arrived at an enemy camp (which Achilles’ domain is, to all intents and purposes), yet they are reticent. Achilles doesn’t blame them, though. He refers to their role as “messengers of gods and men.” Does this indicate a special role? Is their status relevant when he calls on them to be a witness to his statement?

Talthybios and Eurybates both appear in several other episodes, which I’ve not listed here.

The Achaeans have a number of other heralds. In Scroll 2, when they are gathering the forces, “Nine heralds [kērukes] went crying about among them to stay their tumult and bid them listen to the kings, till at last they were got into their several places and ceased their clamor.” (Iliad 2.97–99) So part of their function is to elicit silence. Athena herself performs a similar role a little later: “Then Odysseus, ransacker of cities, rose, scepter in hand, and owl-vision Athena in the likeness of a herald [kērux] bade the people be still, that those who were far off might hear him and consider his council.” (Iliad 2.278–283)

When Menelaos and Alexandros are to meet in single combat, there are rituals to be performed first. Again the heralds play an important role:

Hector sent two heralds [kērukes] to the city to bring the lambs and to bid Priam come, while powerful Agamemnon told Talthybios to fetch the other lamb from the ships
……[245] Meanwhile the heralds [kērukes] were bringing the holy oath-offerings through the city—two lambs and a goatskin of wine, the gift of earth; and Idaios brought the mixing bowl and the cups of gold.
(Iliad 3.116–119, 245–248, Sourcebook)

Idaios seems to be the chief herald for the Trojans. During a later single combat, he and Talthybios from the Achaean side take responsibility for stopping the combat between Hector and Ajax and, it appears, they carry staves, as a symbol of office, although here they also appear to have a practical function:

Then they would have hacked at one another in close combat with their swords, had not heralds [kērukes], messengers [angeloi] of gods and men, [275] come forward, one from the Trojans and the other from the bronze-armored Achaeans—Talthybios and Idaios both of them honorable men; these parted them with their staves, and the good herald Idaios said, “My sons, fight no longer, [280] you are both of you valiant, and both are dear to Zeus who gathers clouds; we know this; but night is now falling, and the requests of night may not be well ignored.”
(Iliad 7.273–283, Sourcebook)

The words for heralds and messengers here appears in the plural form. Although there are two of them, they are not a pair. Idaios appears again in Scroll 24 when he accompanies Priam to request the return of Hector’s body.

Turning to tragedy, in Aeschylus’ Agamemnon a herald first brings the news of the fall of Troy and the imminent return of Agamemnon, although that event has already been signaled by the chain of fires, seen by the watchman at the opening of the drama.

There, I see approaching from the shore a herald [kērux] crowned with boughs of olive. 495 The thirsty dust, consorting sister of the mud, assures me that neither by pantomime nor by kindling a flame of mountain wood will he signal [sēmainein] with smoke of fire. Either in plain words he will bid us to rejoice the more, or else—but I have little love for the report opposite to this! 500 May still further good be added to the good that has appeared!
(Aeschylus Agamemnon 493–500, Sourcebook)

Is the olive wreath part of his attire as a herald, or does it signify something else?

Both Iris and Hermes appear in their own right as messengers in Homeric epic, and it seems that messengers and heralds in general are associated with Hermes. Here, for example, is how Electra addresses the god:

Supreme herald [kērux] of the realm above and the realm below, O Hermes of the nether world, summon for me the superhuman forces [daimones] beneath the earth to hear my prayers
(Aeschylus Libation Bearers 124–126, Sourcebook)

In Eumenides a herald is part of Athena’s procession when she establishes the Athenian system of justice. Again, he is responsible for establishing silence:

Athena enters in procession with a Herald and the jury of the Areopagus.

Herald [kērux], give the signal and restrain the crowd. Let the piercing Tyrrhenian trumpet, filled with human breath, send forth its loud blare to the crowd! 570 For while this council-hall is filling, it is good to be silent, it is good for the whole polis to learn my ordinances for time everlasting, and for these plaintiffs, too, so that dikē will be well-served.
(Aeschylus Eumenides 566–573, Sourcebook)

The other plays in the Sourcebook have a number of messengers, who impart important information, but don’t seem to have the ceremonial functions of heralds. What do you make of their role of conveying information and reporting on what is happening?

I hope you will join me in the forum to explore further the roles and functions of heralds and messengers. For example, I haven’t yet looked at these questions: Where are they named? How are they addressed by others? What evidence is there about their status?