Ivory for the ancient Greeks

Trade in ivory has been banned since 1989 to conserve elephants[1]. However, in the ancient world they made use of ivory. How did the ancient Greeks perceive it and use it? I assumed it would be for ornamental purposes, and would have been carefully carved, but what do the texts and artifacts tell us? 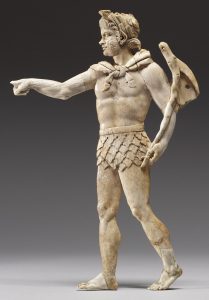 Its sheen is mentioned in an aside Telemachus makes to Peisistratos about the materials and decoration in the palace of Menelaos which has earlier been introduced as “the heavenly [theion] palace …There was a gleam [aiglē] there, which was like the gleam of the sun or the moon” (Odyssey 4.43–45, Sourcebook[2]).

Telemachus said to the son of Nestor, with [70] his head so close that no one might hear, 71 “I want you to notice something, son of Nestor, you who are so dear to my heart: 72 notice the flash [steropē] of bronze [khalkos] as its light pervades the echoing hall 73 and also the flash of gold and of electrum and of silver and of ivory. 74 I’m guessing that Zeus, who lives on Olympus, has such a hall inside his palace, [75] and he would have as many indescribable things as are here. A sense of holy awe takes hold of me as I look at these things.”
Odyssey 4.69–75, Sourcebook

It is right up there with the precious metals gold, electrum, and silver, suggesting it was considered valuable, but also its quality as befitting an immortal god.

When Menelaos is injured in combat, and the blood is flowing from the wound, ivory is mentioned in a simile:

As when some woman of Maeonia or Caria strains purple dye on to a piece of ivory that is to be the cheek-piece of a horse, and is to be laid up in a treasure house—many a charioteer wants to bear it, [145] but the king keeps it as an ornament [kosmos] of which both horse and driver may be proud—even so, O Menelaos, were your shapely thighs and your legs down to your fair ankles stained with blood.
Iliad 1.141–148, Sourcebook

This suggests that ivory was not always left in its natural state but could be dyed. Again, if such an item is worthy of storage in a treasure house, it suggests its value.

Another accoutrement of horses, reins, when decorated with ivory could also be a sign of wealth; in this passage it must have been left undyed as is described as leukos (‘light, bright, clear’). Would the ivory also have a practical application in improving the grip on the reins, or would its smooth surface make them harder to keep hold of? During one of the battles:

They killed high-hearted Pylaimenes peer of Arēs, leader of the Paphlagonian warriors. Menelaos the spear-famed son of Atreus struck him on the collar-bone as he was standing on his chariot, [580] while Antilokhos hit his charioteer and attendant [therapōn] Mydon, the brave son of Atymnios, who was turning his horses in flight. He hit him with a stone upon the elbow, and the reins, enriched with white ivory, fell from his hands into the dust. Antilokhos rushed towards him and struck him on the temples with his sword, [585] whereon he fell head-first from the chariot to the ground. There he stood for a while with his head and shoulders buried deep in the dust—for he had fallen on sandy soil till his horses kicked him and laid him flat on the ground, as Antilokhos lashed them and drove them off to the army of the Achaeans.
Iliad 5.576–590, Sourcebook

This put me in mind of Pelops, who is himself a successful charioteer[3], and who has an ivory shoulder[4]: in Greek the term hōmos refers not just to the shoulder but also the upper arm—between the collar-bone and the elbow, roughly speaking—and these are the very areas of the body where the warrior and his therapōn charioteer are first hit.

In Pindar Olympian 1.27 Pelops’ shoulder is described as phaidimon ‘shining, gleaming’, which is also reminiscent of its quality in Menelaos’ palace. Menelaos is a grandson of Pelops: could this be one reason the Homeric epic incorporates references to ivory with Menelaos? Or does its appearance in other passages suggest some other significance? 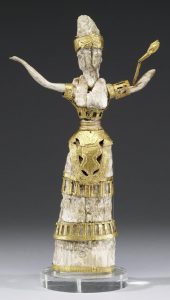 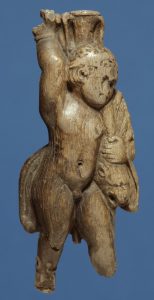 The Greek word elephas, refers both to ivory and to the elephant. I have not yet looked at histories, philosophical discourses, or prose descriptions, nor at passages relating to the natural history of elephants or ivory. Was ivory regarded as a special or precious material? What properties did the ancient Greeks associate with it?

Ivory plaque, from the Sanctuary of Artemis Orthia in Sparta, end of 7th century BCE. National Archaeological Museum of Athens. Kosmos Society image library. The scene probably shows Menelaos leaving Helen behind before sailing for Crete, or the abduction of Helen by Paris.

Ivory decorative plaque, Greek, 2nd half of 7th century BCE, Metropolitan Museum of Art, public domain. Illustrates a mythological subject related to the advent of the god Dionysos in Greece.