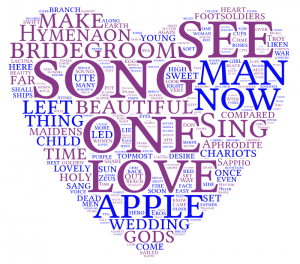 Some say an army of horsemen,
some of footsoldiers, some of ships,
is the fairest thing on the black earth,
but I say it is what one loves.
(Sappho 16, lines 1-4, trans. Julia Dubnoff)

Sappho captures the essence of love and expresses it with words that makes your tongue have a breakdown and make fire rush under your skin.

My tongue has a breakdown and a delicate–
all of a sudden – fire rushes under my skin.
(Sappho 31, lines 9-10, trans. Gregory Nagy)

Let’s share a valentine by discussing Sappho on February 14 in the Project Chatroom from 1:00-2:00 p.m EST. The Book Club will also host a live discussion via  Google Hangout on Tuesday, February 25 2014 at 1:00 p.m EST and a live chat in the Project Chatroom on March 4 at 2:00 p.m EST. We will read the Sappho selection in the HeroesX Sourcebook, the two recently discovered Sappho poems and “Did Sappho and Alcaeus Ever Meet?” by Professor Nagy.

If you want to join in one of the discussions post on this thread to indicate the dates you will be joining us.