Ah, ah! Oh, oh, the agony! 1215 Once more the dreadful ordeal [ponos] of true prophecy whirls and distracts me with its ill-boding onset. Do you see them there—sitting before the house—young creatures like phantoms of dreams? Children, they seem, slaughtered by their own kindred, 1220 their hands full of the meat of their own flesh; they are clear to my sight, holding their vitals and their inward parts—piteous burden![1] 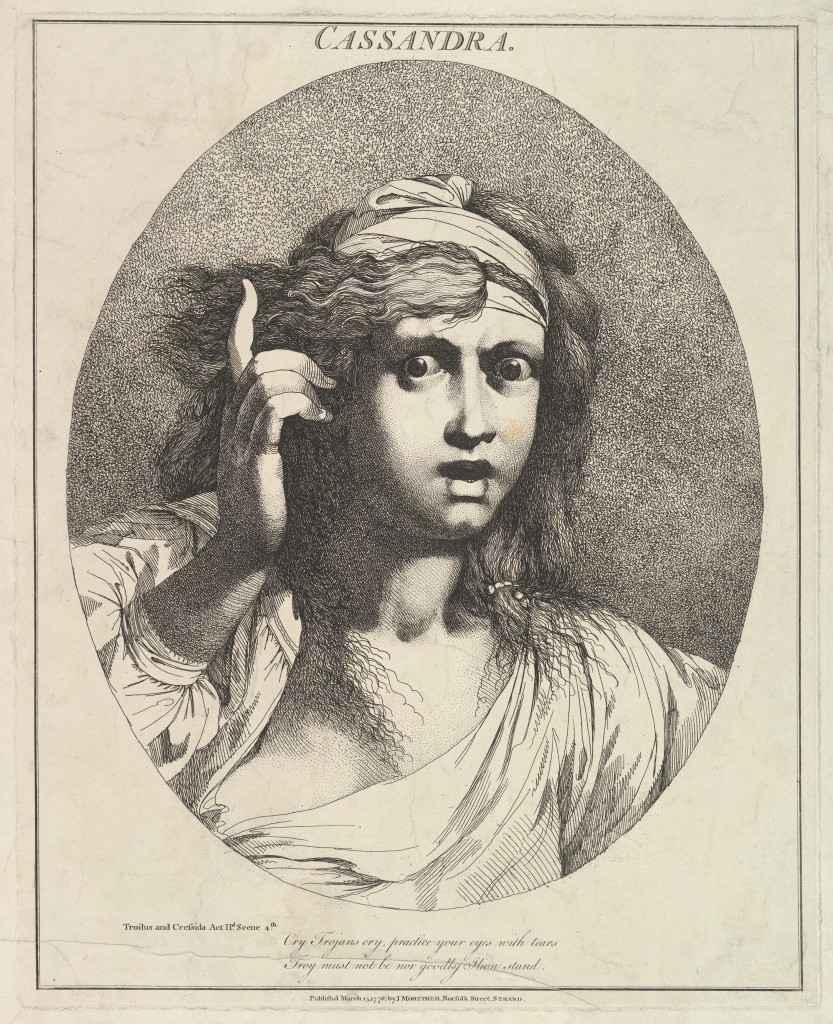 This is the Kassandra that tradition gives us and is foremost in our minds: a half-mad character, hysterical, helpless to escape her doom, shaken, seeing visions of horrific things no one else sees. She predicts that “by Cocytus and the banks of Acheron, I think, I soon must chant my prophecies.”[2]> Considering the above tirade and most of her wailing in Aeschylus’ Agamemnon, we might be persuaded to believe that she is helpless and hapless. But why should we be persuaded by her performance when Kassandra herself says, “I consented (marriage) to Loxias but broke my word…Ever since that fault I could persuade no one of anything.”[3] Rather I contend Kassandra was a second-sighted seeress who moved with Machiavellian skill to the most blessed state a mortal can know.

Let’s start with her story. In happier days the Scamander was her “native stream.”[4] Upon his sandy banks and flowery meadows she wandered,[5] beneath the “elms the willows and the tamarisks”[6], and beside “the lotus also, with the rushes and marshy herbage that grew abundantly by the banks of the river.”[7] 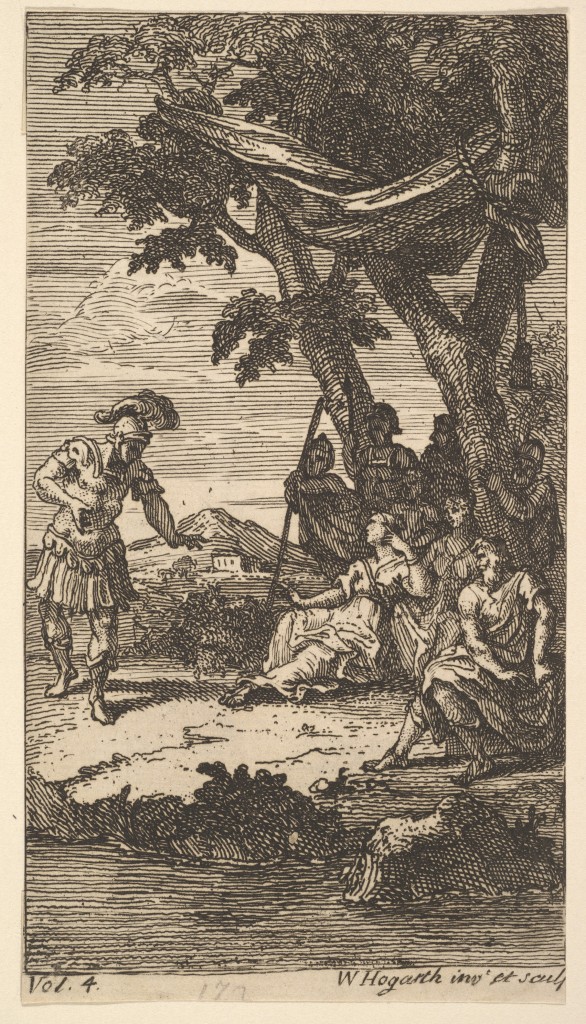 Her father was King Priam of Troy.

Priam ruled from a magnificent palace, which was fronted by marble colonnades. In the main building there were fifty apartments of polished stone, where his sons lived with their wives. His daughters occupied the chambers in the building on the other side of the courtyard, and there they lived with the sons-in-law of the king.[8]>

In his youth her father:

…journeyed to the land of Phrygia, rich in vines, and there he saw in multitudes the Phrygian warriors, masters of glancing steeds, even the people of Otreus and godlike Mygdon, that were then encamped along the banks of Sangarius…

and was counted “their ally…when the Amazons came, the peers of men.”[9] All these nations would play a part in the war to come.

Kassandra’s mother was Hecuba, wife of Priam, mother of Hector; he was “the invincible, steadfast pillar of Troy.”[10] Shortly before giving birth to Paris, Queen Hecuba dreamed that she gave birth to a firebrand; a torch, and the dream was interpreted by Priam’s son Aesacus that “the child was begotten to be the ruin of his country.”[11]

Kassandra and her twin[12] brother Helenus were left by their parents in the shrine of the Thymbraean Apollo.[13]>

…the festival in honour of the birth of the twins was being held in the sanctuary of the Thymbraean Apollo, the two children played with each other there and fell asleep in the temple. Meantime the parents and their friends, flushed with wine, had gone home, forgetting all about the twins whose birth had given occasion to the festivity. Next morning, when they were sober, they returned to the temple and found the sacred serpents purging with their tongues the organs of sense of the children. Frightened by the cry which the women raised at the strange sight, the serpents disappeared among the laurel boughs which lay beside the infants on the floor; but from that hour Cassandra and Helenus possessed the gift of prophecy.[14]>

In like manner, another seer, Melampus, is said to have acquired the art of soothsaying through the action of serpents which licked his ears.

…[Melampus] lived in the country, and before his house there was an oak, in which there was a lair of snakes. His servants killed the snakes, but Melampus gathered wood and burnt the reptiles, and reared the young ones. And when the young were full grown, they stood beside him at each of his shoulders as he slept, and they purged his ears with their tongues. He started up in a great fright, but understood the voices of the birds flying overhead, and from what he learned from them he foretold to men what should come to pass. He acquired besides the art of taking the auspices, and having fallen in with Apollo at the (River) Alpheus he was ever after an excellent soothsayer.[15]

In due time Kassandra would have her own interview with Apollo alongside a lovely river, as we will discuss later.

Her twin brother Helenus was the greatest seer among the Trojans and their allies, and could understand the will of the gods.[16] He was also a warrior and one of the leaders of the host attempting to take the black ships of the Achaeans.[17] His birth name was Scamandrius, named, like his nephew Astyanax, for the local river. He “received the name of Helenus from a Thracian seer, who also instructed him in the prophetic art.”[18] It was Helenus who made a more detailed prophecy than that indicated by the “firebrand” dream of Hecuba when he predicted that if Prince Alexander brought home an Argive wife, the Achaeans would pursue, destroy Troy, and then slay their father and all their brothers.[19]

Naturally when Kassandra heard of her father’s intentions to send Hector and Paris to Sparta her words echoed her twin’s, telling what the Trojans would suffer if he should sent a fleet into Greece.[20] “I see thee, hapless city, fired a second time by Aeacide hands.”[21] 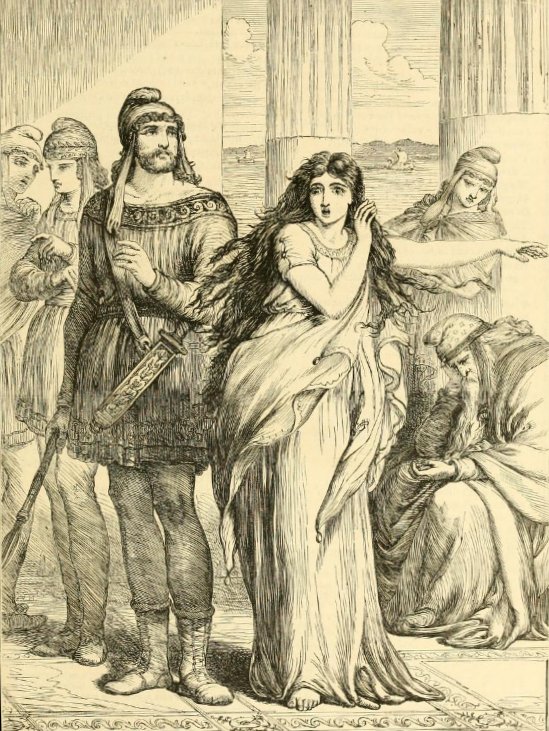 Then one night the war was over! The Achaeans were gone, abandoning their camp and leaving a gift for Athena: the wooden sculpture of a horse, which we know as the Trojan Horse.[28]

So feasted they through Troy, and in their midst loud pealed the flutes and pipes: on every hand were song and dance, laughter and cries confused of banqueters beside the meats and wine. They, lifting in their hands the beakers brimmed, recklessly drank, till heavy of brain they grew, till rolled their fluctuant eyes. Now and again some mouth would babble the drunkard’s broken words. The household gear, the very roof and walls seemed as they rocked: all things they looked on seemed whirled in wild dance. About their eyes a veil of mist dropped.[29]

Her twin brother and fellow seer Helenus was already with the Achaeans. (He went on to attain his best possible fate: king of Epeirus and husband to Andromache, the daughter of Eëtion.[30]) The sooth-sayer Laocoön, brother of Anchises, was dead.[31] But, “One heart was steadfast, and one soul clear-eyed, Cassandra”[32] She knew perfectly well the Achaeans’ purpose for this horse and “the ambush hidden there.” and she was “As mid the hills a furious pantheress…with savage heart.”

The night Troy fell it is not surprising that a virgin should take sanctuary in the temple of the virgin-goddess Athena. Did this seeress know that Athena did not love the Trojans? (Iliad 6.310) Did Kassandra foresee that the Locrian Ajax, would find her there clinging to the wooden image of Athena? That he would drag her from there knocking the goddess’ image to the ground in the process?[33] Did she know that consequently the majority of the Danaans would die when gods sent a storm and contrary winds against them, or that her enemies and the enemies of her people upon returning home after the destruction of her home and the division of her wealth would wreck on the rocks of the Kapherides thanks to the anger of the gods?[34] 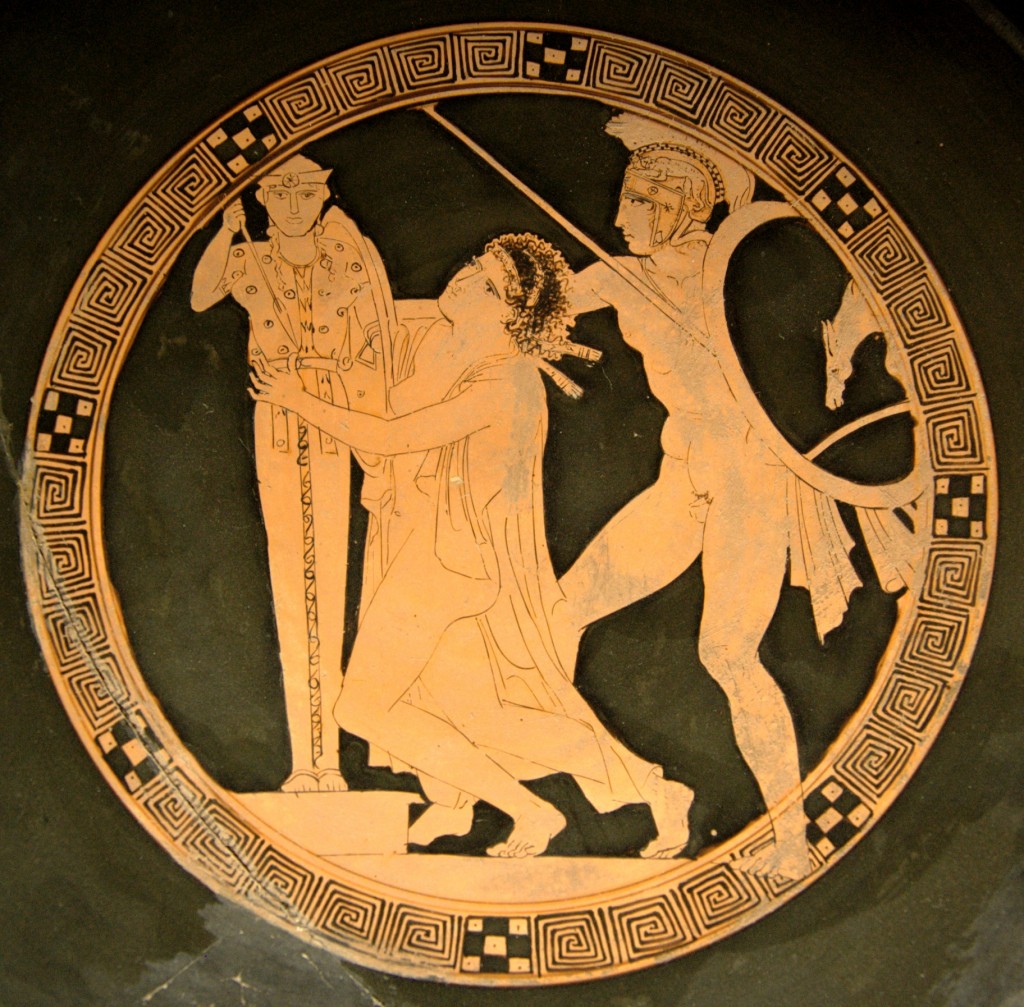 She was the loveliest of Priam’s daughters so naturally when the loot was portioned out she was given as a prize to Agamemnon, the greatest of the Achaean kings. For those who don’t know the story, men die. So do women. So did Kassandra.

But her death doesn’t end her story. In Lycophron’s Alexandra, Cassandra offers a glimpse into her future as a figure of cult worship:

And my husband [=Agamemnon], lord of a slave bride, shall be called Zeus by the crafty Spartiates[35], obtaining highest honours from the children of Oebalus.[36] Nor shall my worship be nameless among men, nor fade hereafter in the darkness of oblivion. But the chiefs of the Daunians shall build for me a shrine on the banks of the Salpe, and those also who inhabit the city of Dardanus, beside the waters of the lake. And when girls wish to escape the yoke of maidens, refusing for bridegrooms men adorned with locks such as Hector wore, but with defect of form or reproach of birth, they will embrace my image with their arms, winning of mighty shield against marriage, having clothed them in the garb of the Erinyes and dyed their faces with magic simples. By those staff-carrying women I shall long be called an immortal goddess.[37]

I like to think of Kassandra, the most beautiful of Priam’s daughters, wandering upon other sandy banks and flowery meadows, maybe hand-in-hand with her sister-in-law Helen, the most beautiful of Priam’s daughters-in-law. As Gregory Nagy shows, the description of the fourth generation in Hesiod’s Works and Days quoted below highlights the positive side of the ancient Greek hero and the prospect of immortalization after death on the Island of the Blessed:[38]

Zeus the son of Kronos made yet another Generation…a fourth one. This one…was just [dikaion]. It was better. It was the godlike generation of men who were heroes [hērōes], who are called demigods [hēmi-theoi]; they are the previous generation [= previous to ours] who lived throughout the boundless earth. These [demigods] were overcome by evil war and the terrible din of battle. Some died at the walls of seven- gated Thebes, the land of Cadmus, as they fought over the sheep of Oedipus. Others were taken away by war over the great yawning stretches of sea to Troy all on account of Helen with the beautiful hair. Then they [= this Generation] were covered over by the finality of death.. But they received, apart from other humans, a life and a place to live from father Zeus the son of Kronos, who translated them to the edges of the earth, far away from the immortal gods. And they live with a carefree heart [thūmos] on the Islands of the Blessed [Nēsoi Makarōn] on the banks of the deep-swirling river Okeanos, blessed [olbioi] heroes that they are.[39]

[19] Dares of Phrygia History of the Fall of Troy 7 The Trojan War. The Chronicles of Dictys of Crete and Dares the Phrygian Translated by R. M. Frazer (Jr.). Indiana University Press. 1966.
http://www.theoi.com/Text/DaresPhrygius.html

[20] Dares of Phrygia History of the Fall of Troy 8
http://www.theoi.com/Text/DaresPhrygius.html

[22] Another name for Apollo, (Herodotus 1.91)
https://chs.harvard.edu/primary-source/herodotus-selections-part-i/

[28] Proclus’ Plot Summaries of the Little Iliad, and the Iliou Persis, Sourcebook, Translated by Gregory Nagy and revised by Eugenia Lao
https://chs.harvard.edu/primary-source/epic-cycle-sb/

[33] Apollodorus Epitome of the Library 5.22, translated by J.G. Frazier

[34] Proclus’ Plot Summaries of the Iliou Persis and Nostoi. Translated by Gregory Nagy and revised by Eugenia Lao, Sourcebook.
https://chs.harvard.edu/primary-source/epic-cycle-sb/

[35] Zeus was worshipped at Sparta under the name Zeus Agamemnon. (Lycophon 335, with the School.; Eustath. ad Il. ii. 25.) via Aaron Atsma at http://www.theoi.com/Cult/ZeusTitles.html. The worship of Zeus Agamemnon is also mentioned in Book 2 of the Exhortations by Clement of Alexandria, translated by Butterworth, G W. Loeb Classical Library Volume 92. Cambridge, MA. Harvard University Press. 1919.
http://www.theoi.com/Text/ClementExhortation1.html

[36] Husband of Gorgophone, ancestress of the gods of the Spartans
https://en.wikipedia.org/wiki/Oebalus

Bill Moulton is a life-long independent researcher in Greek Mythology, starting in fourth grade when his fondness for the topic threw off the grading curve.  Bill is a graduate of HeroesX and active with Hour 25.  He blogs and tweets on Classical Studies. He and wife of twenty-five years, Pat, are the proud grandparents of four wonderful young people.