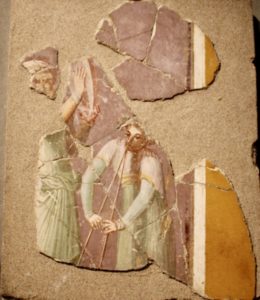 In this post we are going to examine some aspects of marriage, and its music which come traditionally with singing and dancing.

In today’s marriages music, singing and dancing play an essential role in rituals and traditions. Music is played at the beginning of the ceremony, carefully chosen songs are sung during the ceremony, and people dance and sing during the feast.

Were rituals and traditions related to music in weddings also important in ancient Greece? Marriage is “a ritual of initiation in terms of ancient Greek song culture”[1]: an initiation into adulthood.

In an article Gregory Nagy[2] writes about the origin of the word mousikē:

One of the first musical instruments used for marriage mentioned in Homeric epic is the aulos.

During the Online Open House, a discussion of Pindar’s Pythian 12, with Maša Ćulumović[3], we heard about the aulos [‘double-reedʼ], a musical instrument, and we also learned about the invention of the pipe music melos by Athena.

Pythian 12 celebrates a musical victory. It includes a version of the mythological origin of a pipe melody coming from the laments of the sisters of Medusa.

The singing to the aulos was considered to be linked to lamentations, and was dropped from the games as Pausanias recalls because it was “ill-omened”, “dismal” and the words were lamentations.[4]

However, the aulos was not used only for lamentations and sad occasions. Culturally, the music associated with pipes is also linked with happy ritualistic events like marriages. This might not be contradictory: it could be connected with the tradition of lament as a young woman is married.[5]

One example of an aulos is in Iliad 18. It is on the Shield of Achilles and it is in the description of a wedding.

[490] On it he [= the divine smith Hephaistos] wrought two cities of mortal men. 491 And there were weddings in one, and feasts. 492 They were leading the brides along the city from their maiden chambers 493 under the flaring of torches, and the loud bride song was arising. 494 The young men were dancing in circles, and among them [495] the pipes [aulos] and the lyres [phorminx]kept up their clamor as in the meantime the women, 496 standing each at the door of the courtyard, admired them. 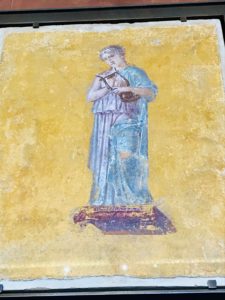 The lyre is another musical instrument played at weddings. In Iliad 24, Apollo himself plays at the wedding of Peleus and Thetis.

I [Hera] married her [= Thetis] to Peleus, who is above measure dear to the immortals; 62 and all you gods attended the wedding. And you too were feasting among them 63 and you [Apollo] had your lyre [phorminx] with you
Sourcebook 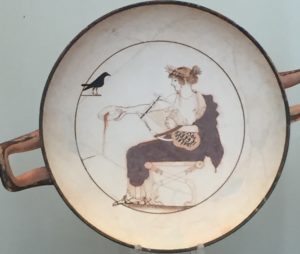 In Odyssey 4.16 Menelaos is preparing his children’s wedding when Telemachus arrives at his palace.

[15] So they feasted throughout the big palace with its high ceilings, both the neighbors and the kinsmen of glorious Menelaos, and they were feeling delight [terpesthai]; in their midst sang-and-danced [melpesthai] a divine singer [aoidos], 18 playing on the special lyre [phorminx]; two special dancers [kubistētēre] among them were swirling as he led [exarkhein] the singing-and-dancing [molpē] in their midst.
(Sourcebook)

Again there is mention of songs, music, instruments, and dance. There is even a divine singer. Emphasis is set on the dancing with the mention of two special dancers swirling. The musical instrument is the lyre, which unfortunately is not described.

The Hesiodic The Shield of Herakles also describes a wedding and again we have a description of men and women singing, and dancing to the sound of the aulos and the lyre.

[270] Next, there was a city of men with goodly towers; and seven gates of gold, fitted to the lintels, guarded it. The men were making merry with festivities and dances; some were bringing home a bride to her husband on a well-wheeled car, while the bridal song swelled high, [275] and the glow of blazing torches held by handmaidens rolled in waves afar. And these maidens went before, delighting in the festival; and after them came frolicsome choirs, the youths singing soft-mouthed to the sound of shrill pipes, while the echo was shivered around them, [280] and the girls led on the lovely dance to the sound of lyres. Then again on the other side was a rout of young men revelling, with flutes playing; some frolicking with dance and song, and others were going forward in time with a flute player and laughing. The whole town was filled with mirth and dance and festivity.

Some Greek words are found in both descriptions.

In both descriptions on the shields the Greek word for pipe is aulos.
With the music from the aulos songs are heard and lyres are played. Young people dance and torches are blazing.
The descriptions are very similar, they both mention the aulos, the lyre, singing and dancing. The use of similar words is part of the oral poetry language both in The Shield of Achilles in the Iliad and in The Shield of Herakles.
The Greek word is aulos, but is it the same sort of aulos that we have in Pythian 12?

The details about the dancing in Homeric poetry and Hesiodic poetry show what may represent some special rituals:
“the maidens led the dance”
and the young men “with flutes playing; some frolicking with dance and song”
“two special dancers [kubistētēre] among them were swirling”
“The young men were dancing in circles”

Sappho, who composed wedding songs still used for today’s marriages, also gives the same type of description in her poem The Wedding of Andromache and Hector.

[lacuna]
20 [lacuna]
21 looking just like the gods [ikeloi theois]
22 …holy
23 set forth into Troy…
24 And the sweet song of the pipe mixed…
25 And the sound of the cymbals, and then the maidens
26 And the news reached his dear ones throughout the broad city.
27 traveled the wondrous echo …

28 And everywhere through the streets…
29 Mixing bowls and cups…
30 And myrrh and cassia and frankincense were mingled.
31 And the older women cried out elelu.
32 Meanwhile all the men sang out a lovely high-pitched song,
33 calling on Apollo Pāōn, the far-shooter, master of playing
beautifully on the lyre.
34 And they sang the song of Hector and Andromache, both looking just like the gods [theoeikeloi]
Sourcebook

Cymbals and the shouting of the older women are added. The men are singing a lovely high-pitched song: did they sing to the aulos?

In all the descriptions that we have looked upon so far the singing seems to accompany different rituals. Marriage is connected with many rituals in every society:
“the loud bride song was arising” (Homer)
“the pipes and the lyres kept up their clamor” (Homer)
“the bridal song swelled high” (Hesiod)
“the men sang out a lovely high-pitched song” (Sappho)
and also probably a song going with another ritual:
“the older women cried out elelu” (Sappho)

Some songs appear to accompany the ritual of praising:

“And they sang the song of Hector and Andromache, both looking just like the gods [theoeikeloi] (Sappho)
“the pipes and the lyres kept up their clamor as in the meantime the women, 496 standing each at the door of the courtyard, admired them.” (Homer) 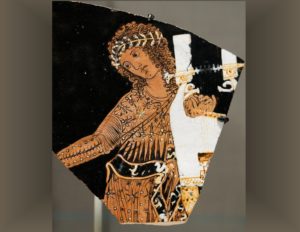 In later texts, such as in the drama Agamemnon, we also have the mention of wedding songs, but this time here with an evil twist; it is more like a mourning song.

antistrophe 1
To Ilion, its purpose fulfilling, 700 the goddess Mēnis brought a marriage rightly named a mourning, exacting in later requital for the dishonor done to hospitality and to Zeus, the partaker of the hearth, 705 upon those who with loud voice celebrated the song in honor of the bride, even the bridegroom’s kin to whom it fell that day to raise the marriage-hymn. 710 But Priam’s city has learned, in her old age, an altered strain, and now, I trust, wails a loud song, full of lamentation, calling Paris “evil-wed”; for she has borne the burden of a life in which everything was destroyed, a life full of lamentation because of 715 the wretched slaughter of her sons.
Sourcebook

Much later Plutarch[10] in his From Plutarch to Pollianus and Eurydice, health and prosperity mentions a special song for young grooms.

Following close upon the time-honoured rites which the priestess of Demeter applied to you when you were retiring together to the bridal chamber, a discourse which equally touches both of you and swells the nuptial song will, I think, have a useful effect which will also accord with convention. For among the variety of musical moods and measures there is one which is called Hippothoros, a sort of composition to the flute [auletikos], made use of to encourage and provoke stallions to cover mares….

…Muses may lend their presence and co-operation to Aphrodite, and may feel that it is no more fitting for them to provide a lyre [lura] or kithara well attuned than it is to provide that the harmony which concerns marriage and the household shall be well attuned through reason, concord, and philosophy

Plutarch uses the word harmoniā, harmony, for music and for marriage. The wording in Greek is important here: the instruments and the household must be well attuned and there must be harmony. 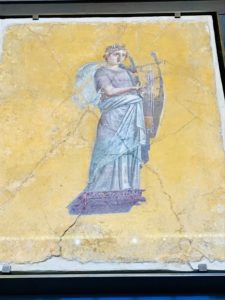 I end with two wedding songs, two fragments by Sappho with a praising touch, and the other one by Theognis of Megara with a message from the Muses.

29
Blessed bridegroom,
The marriage is accomplished as you prayed.
You have the maiden you prayed for.

[4] Pausanias 10.7
English text: A Pausanias Reader, Translation based on the original rendering by W. H. S. Jones, 1918 (Scroll 2 with H.A. Ormerod), containing some of the footnotes of Jones. The translation is edited, with revisions, by Gregory Nagy.
https://nrs.harvard.edu/urn-3:hlnc.prim-src:A_Pausanias_Reader_in_Progress.2018-#X
Greek text: online at Perseus