A wedding ceremony is a celebratory marker for the bride and groom as well as for their two families. Further, this joyful event, rich with rituals, extends to the community that the bride and groom are part of. In ancient Greece, weddings were celebrated with many customs and rituals attached. The roles were assigned and expected to be performed according to traditions.

Kirk Ormand in his book titled Exchange and the Maiden, “Chapter 1: The Semantics of Greek Marriage” (page 9) describes traditions that were practiced in fifth-century Athens:

The bare bones of fifth-century Athenian weddings are as follows: possibly long before the marriage, the bride’s father promised her to the groom. This betrothal, or engyesis , was a legally recognized act, and it is often referred to in court cases to establish the legitimacy of a marriage. Before the bride was actually handed over the groom (ekdosis), she underwent ritual purifications. She took a special bath (loutra) with her friends, traditionally in the spring Callirhoe, dedicated toys to Artemis, and cut her hair. In the ceremony proper (gamos), the bride and groom processed to their new home, accompanied by friends and relatives. The mothers of each acted as torchbearers. Upon entering their new oikos, the couple was showered with dates and other food symbolizing fertility. They shared a meal of sesame cake, at which time the bride probably removed her veil (anakaluptēria), though some sources suggest that this took place during the procession. The groom’s mother then led them into their marital chamber (thalamos). The wedding party retained outside and sang wedding songs (epithalamia). Some guests may have stayed through till morning. This first night was known as “camping out” (epaulia). On the next day, the bride’s parents sent her gifts (phernē), which seem to have consisted of combs, mirrors, and other beautifying objects. After these rituals were completed, the groom might have introduced his bride to his phratry at the ceremony called the apatouria. The phratry might also have held a gamēlia, or wedding banquet, in honor of the marriage.[1]

In this post, let us journey through wedding rituals with ancient Greek texts and vases.

Loutra is the special bath the bride takes with her friends and relatives. This is a day of purification and ritual sacrifice by way of cutting hair.

In Euripides’ Phoenessae, we see a loutra that couldn’t happen. Iocasta laments that the river Ismenos couldn’t supply a loutra for a bride for Polyneikes.

[345] the custom in marriage for a happy mother; Ismenus had no part at your wedding in supplying the luxurious bath, and there was silence through the streets of Thebes, at the entrance of your bride.[2]

There is a special vase called loutrophoros in which the water was carried for the marriage bath as mentioned by Andromache Karanika in her presentation at Delphic Preview, Festival of the Muses.[3]

The wedding bowl, lebes gamikos, is another kind of pottery for which experts have different views about its usage; either to carry hot water for the marriage bath, or as a food container for the bride and the groom to share at the bridal chamber.[4]

1423 To you, poor sufferer, in compensation for these bad things that have happened to you here, 1424 the greatest honors [tīmai] in the city [polis] of Trozen 1425 I will give to you: unwed girls before they get married 1426 will cut off their hair for you, and throughout the length of time [aiōn] 1427 you will harvest the very great sorrows [penthos plural] of their tears.
Eurpides’ Hippolytus 1423–1427, Sourcebook[5]

Herodotus mentions a dedication in Delos where both girls and boys dedicate a lock of hair before marriage.

I know that they do this. The Delian girls and boys cut their hair in honor of these Hyperborean maidens, who died at Delos; the girls before their marriage cut off a tress and lay it on the tomb, wound around a spindle (this tomb is at the foot of an olive-tree, on the left hand of the entrance of the temple of Artemis); the Delian boys twine some of their hair around a green stalk, and lay it on the tomb likewise.
Herodotus Histories 4.34.1–4.34.2[6]

Gregory Nagy points out that the ritual of cutting hair and dedicating signals an initiation, a coming of age, a transition from the realms of Artemis to realms of Aphrodite, in his discussion of Pausanias’ description of a ritual in Troezen:

I describe this event that takes place [at the festival]: each and every virgin girl [parthenos] in the community cuts off a lock of her hair [plokamos] for him [= Hippolytus] before she gets married, and, having cut it off, each girl ceremonially carries the lock to the shrine [nāos] and deposits it there as a dedicatory offering.
Pausanias 2.32.1, Part of Hour 20 Text H

And this ritual, I now argue further, is an initiation from one phase of life into another. The girls who are initiated by way of participating in the ritual are transformed into women who are now ready to get married. So, now, these girls can make a transition from a phase of virginity, as represented by the goddess Artemis, into a phase of heterosexuality, as represented by the goddess Aphrodite.
The Ancient Greek Hero in 24 Hours. Hour 20§41[7]

The journey of the bride from her father’s house to her new home is marked with a procession. The mothers of the bride and groom acted as torch-bearers. The torch-bearing is a custom Clytemnestra would be hoping to perform for her daughter Iphigenia. Her conversation with Agamemnon also marks other preparations.

Clytemnestra
Happiness attend the pair! Which day will he marry her?
Agamemnon
As soon as the full moon comes to give its blessing
Clytemnestra
Have you already offered the goddess a sacrifice to usher in the maiden’s marriage?
Agamemnon
I am about to do so; that is the very thing I was engaged in.
Clytemnestra
[720] And then will you celebrate the marriage feast afterwards?
Agamemnon
Yes, when I have offered a sacrifice required by the gods of me.
Clytemnestra
But where am I to make ready the feast for the women?
Agamemnon
Here beside our gallant Argive ships.
Clytemnestra
Finely here! but still I must; good come of it for all that!
Agamemnon
[725] Do you know what to do, lady? Then obey me.
Clytemnestra
In what matter? for I was ever accustomed to obey you.
Agamemnon
Here, where the bridegroom is, I will—
Clytemnestra
Which of my duties will you perform in the mother’s absence?
Agamemnon
Give your child away with help of Danaids.
Clytemnestra
[730] And where am I to be then?
Agamemnon
Go to Argos, and take care of your unwedded daughters.
Clytemnestra
And leave my child? Then who will raise her bridal torch?
Agamemnon
I will provide the proper wedding torch.
Clytemnestra
That is not the custom; but you think lightly of these things.
Agamemnon
[735] It is not good for you to be alone among a soldier-crowd.
Clytemnestra
It is good that a mother should give her own child away.
Agamemnon
Yes, and that those maidens at home should not be left alone.
Clytemnestra
They are well guarded in their maiden bowers.
Agamemnon
Obey.
Clytemnestra
No, by the goddess-queen of Argos! [740] Go, manage matters out of doors; but in the house it is my place to decide [what is proper for maidens at their wedding]

Cassandra in Euripides’ Trojan Women, says, since her mother is lamenting for her husband, she herself is carrying a wedding torch, which normally a mother would do.

Bring the light, uplift and show its flame! I am doing the god’s service, see! see! making his shrine to glow with tapers bright. [310] O Hymen, lord of marriage! blessed is the bridegroom; blessed am I also, soon to wed a princely lord in Argos. Hail Hymen, lord of marriage! [315] Since you, my mother, are busied with tears and lamentations in your mourning for my father’s death and for our country dear, I at my own nuptials [320] am making this torch to blaze and show its light, giving to you, O Hymen, giving, O Hecate, a light, at the maiden’s wedding, as the custom is.[325] Nimbly lift the foot; lead the dance on high, with cries of joy, as if to greet my father’s happy fate. The dance is sacred. Come, Phoebus, now, for it is in your temple [330] among your bay-trees that I minister. Hail Hymen, god of marriage! Hymen, hail! Dance, mother, and laugh! link your steps with me, and circle in the delightful measure, now here, now there. [335] Salute the bride on her wedding-day with hymns and cries of joy. Come, you maids of Phrygia in fair raiment, sing my marriage [340] with the husband fate ordains that I should wed.
Euripides Trojan Women 307–338[9]

The Shield of Achilles describes a joyous wedding procession with the torch-bearers.

[490] On it he [= the divine smith Hephaistos] wrought two cities of mortal men. 491 And there were weddings in one, and feasts. 492 They were leading the brides along the city from their maiden chambers 493 under the flaring of torches, and the loud bride song was arising. 494 The young men were dancing in circles, and among them [495] the pipes and the lyres kept up their clamor as in the meantime the women, 496 standing each at the door of the courtyard, admired them.
Iliad 18.491–496, Sourcebook[10] 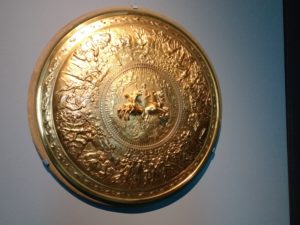 Food is a big part of the wedding ceremonies; besides the wedding banquet, certain food had peculiar meanings. Plutarch describes one:

In Boeotia, after veiling the bride, they put on her head a chaplet of asparagus; for this plant yields the finest flavoured fruit from the roughest thorns, and so the bride will provide for him who does not run away or feel annoyed at her first display of peevishness and unpleasantness a docile and sweet life together. Those who do not patiently put up with the early girlish disagreements are on a par with those who on account of the sourness of green grapes abandon the ripe clusters to others. Again, many of the newly married women because of their first experiences get annoyed at their husbands, and find [p. 303]themselves in like predicament with those who patiently submit to the bees’ stings, but abandon the honeycomb.
Plutarch Conjugata Praecepta 2[11]

One wonders if any of these rituals survived in our current time?

[3] Center for Hellenic Studies Delphic Preview, Festival of the Muses, starting at 1:06:09

[6] Herodotus, with an English translation by A. D. Godley. Cambridge. Harvard University Press. 1920. via Perseus

[9] Euripides. The Plays of Euripides, translated by E. P. Coleridge. Volume I. London. George Bell and Sons. 1891, via Perseus

Two women at a bathtub on which Eros is standing. Jastrow via Wikimedia Commons Creative Commons Attribution 2.5 Generic

Young bride preparing her wedding. Side A of an Attic red-figured lebes gamikos.from 500 until 450 CE, National Museum of Denmark via Wikimedia Commons

The Shield of Achilles, Kosmos Library