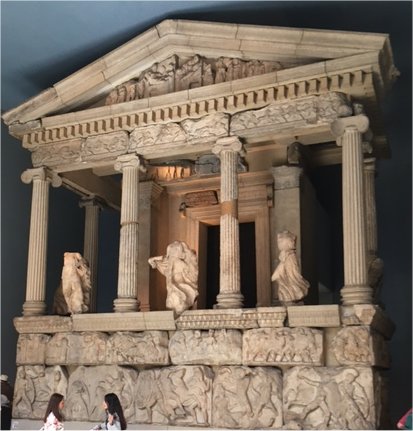 One Saturday in July I arrived at the British Museum about 11:30, just in time for the free tour of the Nereid Monument. I always thought it was a nymphaeum—a shrine to the Nereids—but it isn’t. I discovered that it was the tomb of Arbinas the dynast of Lycia—a sort of a sub-king to the Persian king.

For those who don’t know, after Alexander the Great conquered the known world and the Hellenistic age began in earnest, being “Greek” was very cool.

the Hellenistic period, witnessing the diffusion of Greek culture through much of the mediterranean and middle east, a diffusion vastly accelerated by the conquests of Alexander the Great, and the various dynasties established by his generals after his death in 323 B.C. Over the Hellenised domains there was a common ruling class culture, using a common literary dialect and a common education system. The city of Alexandria in Egypt, founded by Alexander in 331 B.C., became a centre of scholarship and letters, housing an enormous library and museum, and hosting such renowned poets and grammarians as Callimachus, Apollonius Rhodius, Aristarchus and Zenodotus. …The Hellenistic period is usually said to end with the battle of Actium in 31 B.C. in which the last portion of Alexander’s empire, Egypt, was annexed by the increasingly powerful and expanding Roman Republic.
(M.A.R. Habib, “Introduction to the Classical Period”)[1]

So it is no surprise that Arbinas built a heroic shrine for himself that looks like an Ionic temple.

Why Nereids then? Well, according to the British Museum, “The three figures are sea nymphs, daughters of the sea god Nereus, riding over the waves on sea creatures. They are thought to have escorted the soul of the deceased on its journey to the afterlife.”[2] Apparently Filippo Buonarroti in 1698, while cataloguing artifacts, speculated that Nereids and Tritons in funeral art “represent the journey of the soul to the isles of the blessed.”[3] It may be hard to tell in the photograph below, but each figure is balancing on the head of a dolphin or sea-monster being swept along the surface of the ‘wine dark’ sea. 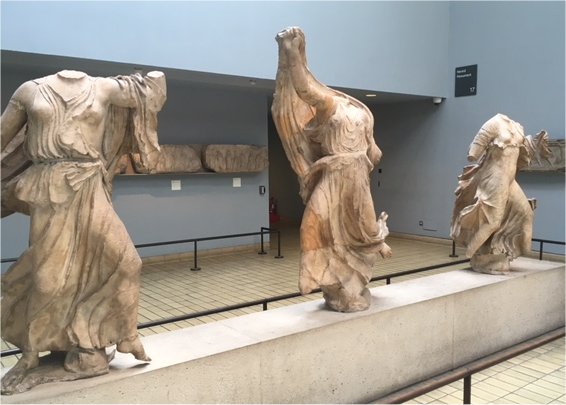 I didn’t recall too many stories about Nereids as psychopomps, until I started doing a little research.

Proclus, in his plot-summary of the Aithiopis (p106, 12–15), tells us that the Nereid Thetis takes her son’s body from the funeral pyre and carries it to the White Island [Leukē][4], this being listed by Gregory Nagy as an “otherworldly place” like the “isles of the blessed” that Buonarroti referenced[5].

At the end of Euripides’ Andromache (1255–1268), the Nereid Thetis tells her aged, woe-laden mortal husband that she and her dancing sisters will come to fetch him home to live eternally (“undying and unwilting [aphthiton]”) in their father Nereus’ hall.[6]

“Such is the tale told of the fair-throned maids of Cadmus, who suffered mightily, but heavy woe falls before greater good . . . The tale runs too, that in the ocean with the sea-maidens, Nereus’ daughters, Ino was given undying life forever.” (Pindar, Olympian Ode 2. 22–31)[7]

I can’t resist adding that Milton, in Comus (lines 940-975), has the Princess Sabrina immortalized by Nereus and made goddess of the River Severn.[8]

Probably the myth most supportive of the British Museum’s position that Nereids helped “the soul of the deceased on its journey to the afterlife” and Buonarroti’s comment about Nereids and Tritons in funeral art, is the story of Helle. Little Helle and her brother Phrixus were threatened with an awful fate and only saved at the last minute by a winged ram with a gold fleece. Her story is told in Flaccus’ Argonautica:

But lo! As dawn was breaking, the waves opened and scared the flying ship [of the Argonauts], and there stood before them Helle [i.e. the sister of Phrixus) who fell from the Golden-Ram and became goddess of the Hellespont chapleted, the sister now of [the Nereides] Panope and Thetis, and holding in her left hand a golden sceptre. Then she lulled the waves, and looking upon the captains and their leader accosted Jason with gently words…”straightway as I fell, Cymothoe [a Nereid] and Glaucus (a Triton) came swift to my succour; this abode too, this realm the father of the deep himself awarded me, willing justly, and our gulf envies not Ino’s sea [the Gulf of Corinth].”
Valerius Flaccus, Argonautica 2.585-607[9]

[In Colchis stands] the tomb of Phrixus, beside whom stands wrought in marble his sister [Helle]…
Valerius Flaccus, Argonautica 5.195[10]

Most Grecian temples are adorned with friezes depicting wars against centaurs, Amazons, giants or barbarians. The frieze around Arbinas’ “temple” depicts him conquering his own cities in order to reclaim his birthright to rule western Lycia on the Persian king’s behalf. He was the seventh and the last of his family to rule Lycia.[11] What do you think? Was he heroic enough to get a lift from the Nereids to an afterlife where he and other heroes,

… live with a carefree heart [thūmos] 171 on the Islands of the Blessed [Nēsoi Makarōn] on the banks of the deep-swirling river Okeanos, 172 blessed [olbioi] heroes [hērōes] that they are, and for them there is a honey-sweet harvest [karpos] 173 that comes to fruition three times each year, produced by the life-giving land.
(Hesiod, Works and Days 170–173, Sourcebook)[12]

Did he make it to Islands of the Blessed? Does anyone know of other examples of the Nereids or other water gods helping a mortal along to the afterlife?