Now Online: The Anger of Achilles by Leonard Muellner 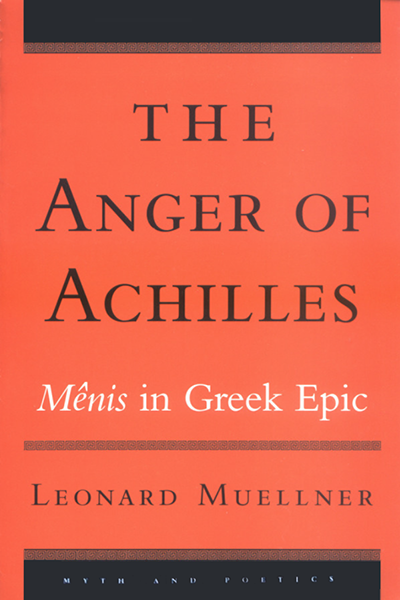 Community members who have enjoyed our past discussions with Professor Leonard Muellner will be happy to hear that the Center for Hellenic Studies has added Muellner’s The Anger of Achilles: Mênis in Greek Epic to its curated collection of free, online books.

As in his first full-length volume, The meaning of Homeric εὔχομαι through its formulas, Muellner has focused this study on a single word and theme, but in this case his topic is nothing less than the subject of one of the foundational texts of the Western cannon.

The book has five chapters and an appendix:

1. Mênis and Cosmic Status in the Hierarchy of Peers

2. Mênis and the Social Order

3. The Narrative Sequence of the Hesiodic Theogony

4. The Mênis of Achilles and the First Book of the Iliad

5. The Mênis of Achilles and Its Iliadic Teleology

Appendix. The Etymology of Mênis

Throughout, Muellner combines philological and anthropological approaches as he presents careful, systematic and contextual analysis of each and every occurrence of mênis and its derivatives in Greek epic, eventually arriving at a new definition:

Mênis is an emotion that acts to change the world. It is not a word for ‘solemn anger’ but the sacred name of the ultimate sanction against tabu behavior, and epic personages invoke it to forestall people from breaking fundamental cosmic rules.

Each chapter builds upon the next as Muellner considers the words, formulas, themes, and texts that deal with this cosmic anger. Richard Martin has rightfully called Muellner a “homerist’s homerist” for his beautiful prose, original analysis, and technical skills as a philologist. Chapter 3, which explores the metonymic logic of the Theogony, supports such an epithet. It is a revelation that may change how you read ancient Greek myth generally. The appendix, which considers an Indo-Iranian term related to mênis, may feel less familiar to readers, but proves worth the effort. Rest assured, Muellner translates every passage he discusses, so even new readers of ancient Greek literature will find that this text is accessible and rewarding.

“Mênis opens for consideration an immense range of significant poetic possibilities, not the least of which is that of an ethical sense for the term.”—Bryn Mawr Classical Review

“Henceforth no one will be able to claim that mênis merely connotes strong emotion. Muellner has demonstrated that mênis is a critical component of the workings of both the human and divine cosmos. And that is no small accomplishment.”—American Journal of Philology

“It is high praise, and deserved, to say that this study will take its place . . . as one of the works that have given us insights into truly fundamental issues in Homer.”—Classical Journal

Community members who would like to discuss this text and its themes can begin the conversation in the forums.