Online Open House | A Young Woman’s Journey to Womanhood: Greek and Indic Models from Menander and Kālidāsa, with Arti Mehta

We were excited to welcome Arti Mehta of Howard University for an Online Open House entitled “ A Young Woman’s Journey to Womanhood: Greek and Indic Models from Menander and Kālidāsa” The event took place on Friday, February 19 at 11:00 a.m. EST and was recorded. You can watch the recording on the Center for Hellenic Studies YouTube Channel, or in the frame below.

Of interest but not required: Piku (2015), directed by Shoojit Sircar 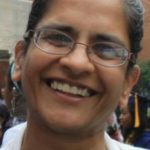 Arti Mehta earned an undergraduate degree in English at San Francisco State University, with a focus on poetry and on literature by women. On formally entering the field of classics in graduate school, she acquired the languages of classical studies (M.A. in Greek), the methodologies of comparative literature, and the religious, philosophical, and story-telling perspectives of India studies. She was a Summer Fellow at the American School of Classical Studies in 2000, awarded the Semple Grant from the Classical Association of the Middle West and South. Indiana University graduate student and dissertation fellowships led her to write a thesis on Greek, Latin and Indian fables under the aegis of Dr. Eleanor Leach, thereby earning a PhD in Greek with minors in Latin and Sanskrit. A project on the philosophy of Jainism, conducted in India, was adopted into her high school library; her dissertation was accepted by the Library of Congress. Dr. Arti Mehta teaches language and literature classes in the Department of Classics.