We were excited to welcome Manuela Pellegrino for an Online Open House entitled “Greek Language, Italian Landscape.” The event took place on Friday, December 3 at 11:00 a.m. EST and was recorded. You can watch the recording on the Center for Hellenic Studies YouTube Channel, or in the frame below.

To get ready for the event, you might like to read Chapter 6, “Certain Things Never Change and Those Sound Better in Griko” from her book Greek Language, Italian Landscape: Griko and the Re-storying of a Linguistic Minority

Mentioned during the discussion: poems by Manuela Pellegrino, which can be found at Classical Inquiries:
https://classical-inquiries.chs.harvard.edu/three-poems-by-manuela-pellegrino/ 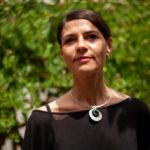 Since 2006, Manuela has been conducting research among Griko-speakers and activists in Grecìa Salentina (Apulia, Southern Italy) and ‘aficionados of Griko’ in Greece (her monograph on the subject has been recently published, 2021). Her work highlights the transformative effects on the ground of the interplay of language ideologies and policies promoted by the EU, Italy, and Greece to protect Griko, a language of Greek origins; this process has enhanced locally a general ‘revival’ which, by mobilizing cultural heritage more broadly as a resource for the future, has led to unpredictable repercussions for the entire area. Since 2019 Manuela has been a fellow at the Center for Hellenic Studies (CHS), Harvard University, focusing on a project which investigates the protest movements against the environmental crisis affecting Salento and Greece; this moves beyond language revival but she continues to investigate the role that the cultural heritage of Hellenism plays in shaping contemporary relationships between Greece and Italy. She previously was a Smithsonian Fellow (Jan 2018–June 2019), CFCH, co-investigator of a comparative project on the Griko (Grecìa Salentina, Apulia) and Greko (Calabria) linguistic minorities of southern Italy. Her work on Griko reflects a longstanding interest, as she originally comes from Zollino, a village belonging to Grecìa Salentina. Her research interests include: language ideologies, cultural heritage, identity politics, Hellenism, historicity and temporality, environmental issues and conflicts, Italy, Greece.

Manuela holds a master’s degree and PhD in anthropology (University College of London) and she has lectured part-time at Brunel University London (“Ethnicity, culture and identity”).