We were excited to welcome Emily Greenwood on Friday, March 25, 2022, for an Online Open House entitled “Herodotus, interpretation, and translation.” The passages that were under discussion can be found in this handout. Kosmos members can access additional materials pertaining to the workshop by logging into the forums. 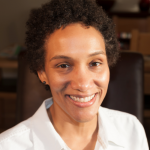 Emily Greenwood’s research spans ancient Greek literature (especially historiography), classical reception studies, translation studies, intellectual history, postcolonial studies, and Black Studies. She has published two books: Afro-Greeks: Dialogues Between Anglophone Caribbean Literature and Classics in the Twentieth Century (2010), joint winner of the 2011 Runciman Award, and Thucydides and the Shaping of History (2006). She has also co-edited two volumes, Homer in the Twentieth Century: Between World Literature and the Western Canon (co-edited with Barbara Graziosi), and Reading Herodotus: A Study of the Logoi in Book 5 of Herodotus’ Histories (co-edited with Elizabeth Irwin). Her current book project, Black Classicisms and the Expansion of the Western Classical Tradition, explores the critical difference that local and transnational black traditions of interpreting Greek and Roman classics make to existing conceptions of the Western classical tradition and Classics as a node for black internationalism. She is also guest editor for a two-volume special issue of the American Journal of Philology on the theme of “Diversifying Classical Philology”.