We were excited to welcome Joel Christensen for an Online Open House. The title of the discussion is “Homer’s Thebes: Epic Rivalries and the Appropriation of Mythical Pasts,” based on his research and collaboration with Elton T. E. Barker.

The event took place on Friday, March 6 at 11:00 a.m. EST. (Note day!) It was live-streamed and recorded. You can view on the Center for Hellenic Studies YouTube channel or in the frame below.

In preparation, you might like to read Iliad 4.1–421 and Odyssey 11.225–332, as well as the first chapter of Homer’s Thebes on the Center for Hellenic Studies website. 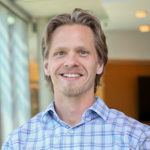 Professor Christensen has been a Fellow at the Center for Hellenic Studies (2013) and has received the Society for Classical Studies’ Award for Excellence in Teaching at the Collegiate Level (2013). In addition to articles on language, myth and literature in the Homeric epics, he has published A Beginner’s Guide to Homer (One World, 2013) and also Homer’s Thebes (CHS, 2019) with Elton T. E. Barker as well as A Commentary on the Homeric Battle of Frogs and Mice (Bloomsbury, 2018) with Erik Robinson. In 2020, he will publish “The Many-Minded Man: the Odyssey, Psychology, and the Therapy of Epic” with Cornell University Press.

“I’m a Reader in Classical Studies, having joined The Open University as a Lecturer in July 2009. Before then, I had been a Tutor and Lecturer at Christ Church, Oxford (2004-9), and also lectured at Bristol, Nottingham and Reading.

“I came to Classical Studies late – my “A” levels were in English, Geography and Mathematics. I studied Classical Civilisation at the University of Leeds, and went on to do a Masters in Greek Civilisation there, and then, in order to learn the languages, a further Masters in Greek and Latin at Ohio State University in the USA. For my PhD, I studied in Cambridge (Pembroke College), where I investigated representations of verbal contest – or agon – in different ancient Greek genres, under the supervision of Simon Goldhill and Paul Cartledge.

“I have been a Junior Research Fellowship at Wolfson College, Cambridge (2002-4) and a Visiting Fellow at Venice International University (2003-4). From 2012-2013 I had a Research Fellowship for Experienced Researchers awarded by the Alexander von Humboldt Foundation for research at the Freie Universität Berlin and the University of Leipzig. I have been awarded a Graduate Teaching Award from Pembroke College (Cambridge) and twice won awards from the University of Oxford for an Outstanding Contribution to Teaching.”