The discussion was live-streamed on the Center for Hellenic Studies YouTube channel on Friday, October 9, at 11 a.m. EDT, and was recorded. 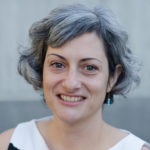 Denise Demetriou is the Gerry and Jeannie Ranglas Chair in Ancient Greek History and Associate Professor of History at the University of California — San Diego, where she has also served as the Director of UCSD’s Center for Hellenic Studies. She received her Ph.D. in Classics from The Johns Hopkins University in 2005. Her research interests focus on archaic and classical Greek history, with a particular interest in exploring different kinds of cross-cultural interactions within the Greek world and between Greeks and non-Greeks. Her first book, Negotiating Identity in the Ancient Mediterranean: The Archaic and Classical Greek Multiethnic Emporia (Cambridge 2012), studied the construction of ethnic, civic, religious, and social identities in the ancient Mediterranean from the seventh to the fourth centuries BCE. She has co-edited (with Amalia Avramidou) Approaching the Ancient Artifact: Representation, Narrative, and Function (De Gruyter 2014).