Online Open House | Itinerant professionals of literature and music in the epigraphic sources of the Hellenistic period. “Poeti Vaganti” in Delphi and Delos.

We were excited to welcome Angela Cinalli of “La Sapienza” University of Rome, for an Online Open House, titled “Itinerant professionals of literature and music in the epigraphic sources of the Hellenistic period. ‘Poeti Vaganti’ in Delphi and Delos.” The event took place on Friday, June 12 at 11:00 a.m. EDT, and was recorded.

In preparation for the event, you might like to read the primary sources in this PDF handout.

Optionally, you might also like to read Dr. Cinalli’s related 2014 essay “Οὐ τὸ νικᾶν ἀλλὰ τὸ εὖ ἀγωνίζεσθαι: Playing to win or to show off? Itinerant artists performing in unconventional ἀγῶνες in some decrees from Delphi (third to first century BC).”

Additionally, and also optionally, you might like to watch Dr. Cinalli’s contribution to the Center’s upcoming event called The Delphic Preview: Festival of the Muses. 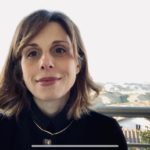 Angela Cinalli (M.A. in Classics, University “G. D’Annunzio” of Chieti; Ph.D. in History and Philology of the Ancient World, “La Sapienza” University of Rome) is a Marie Skłodowska-Curie Researcher MSCA-IF-GF at “La Sapienza” University of Rome and at the Center for Hellenic Studies (Harvard University). She carries out a project on itinerant professionals of the performing arts (the so-called poeti vaganti) in the epigraphic sources of the Hellenistic period.
Her research interests include Greek Epigraphy, Hellenistic Literature and Culture, and Cyrenaican History, Archaeology, and Epigraphy. In the past years, she taught at Italian Liceo Classico and Liceo of Humanities.
As a former fellow at the Center for Paleographical and Epigraphical Studies (The Ohio State University, 2013) and at the CHS (2014), and thanks to the AIEGL Research Grant held at the University of Crete (2018), she investigated key aspects of her project on the Poeti Vaganti that, for the numerous themes revolving around music, can also benefit from her music education (Conservatorio di Musica “Santa Cecilia”, Rome). As epigraphist, Angela joined the archaeological missions of the University “G. D’Annunzio” of Chieti in Cyrenaica and Cyprus, where her expertise in Greek Paleography (Specialization at the Vatican School of Paleography) could be put to good use.
She is author of “Τὰ ξένια. La Cerimonia di Ospitalità Cittadina” (Roma 2015), of contributions on various aspects of the Poeti Vaganti research and on newly-found epigraphic materials from Cyrenaica and Cyprus.