We were excited to welcome Bettina Joy de Guzman for an Online Open House entitled “Performing Ancient Greek lyric and music.” The event took place on Friday, February 5 at 11:00 a.m. EST and was recorded. You can watch the on the Center for Hellenic Studies YouTube Channel or in the frame below.

To get ready for the event, you can watch: 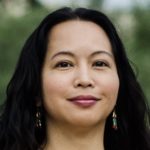 Bettina Joy de Guzman​ is a multi-instrumentalist, educator, and Classicist who composes music inspired by research of ancient cultures, especially Ancient Greek music and poetry. She has been invited to lecture, sing authentic ancient poetry, and play historical instruments in various universities and museums, internationally. These include virtual performances for Harvard University’s Center for Hellenic Studies, and live performance for the National Archaeological Museum in Athens. As Regent’s Fellow in University of California in Irvine, she taught Ancient Greek and Roman history as well as mythology. A book she edited, Ancient Greek Lyre: Learning Method, by Nikos Xanthoulis (Greek National Opera), was shortlisted for the Good Life category of Greek Public Book Awards in June 2019. As President of California Classical Association South, she organizes panels twice a year. She is co-creator and host of Cosmote TV, History Channel, “Ancient Greek Culture, Now!” which aired January 2021 in Greece. Her music recordings and video performances have been shown in Classics courses as part of lecture enrichment and supplementary material.
For further information on albums, interviews, and upcoming events: www.bettinajoydeguzman.com