We were excited to welcome Rebecca Futo Kennedy for an Online Open House entitled “The Hippolytus of Euripides.” The event took place on Friday, May 14 at 11:00 a.m. EDT and was recorded. You can watch the event on the Center for Hellenic Studies YouTube Channel or in the frame below. 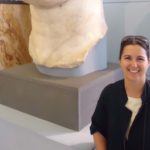 Rebecca Futo Kennedy is Associate Professor of Classical Studies at Denison University. She is author of numerous articles on tragedy, Greek history, ancient immigration and identity and modern racialized engagements with antiquity. She is the author of two monographs:
Athena’s Justice (2009) and Immigrant Women in Athens (2014). She edited of Brill’s Companion to the Reception of Aeschylus
(2018) and co-edited The Routledge Handbook to Identity and the Environmen (2015) and Race and Ethnicity in the Classical World: An Anthology of Primary Sources (2013). She is currently completing a book for general audiences on race and ethnicity in the ancient world and its modern politics for Johns Hopkins University Press, a new sourcebook on women in Greek and Roman contexts (for Hackett Press) as well as a short historiography on how the ancient Greeks and Roman came to be racialized as “White” in US popular and academic contexts in the 19th–20th centuries for Brill’s Research Perspectives in Ancient History series. She has also begun work on a textbook with Dr. Jackie Murray on understanding race and ethnicity in antiquity and its modern receptions.