After we finish reading the last scroll of the Iliad, we might wonder what happens in Troy after Hector’s funeral.

We have parts of what happens next in the Odyssey, in tragedies, and in fragments and plot-summaries. However, in his Description of Greece Pausanias writes an interesting description of a painting which depicted “Troy taken and the Greeks sailing away” (Pausanias 10.25.2)[1], and which was still at Delphi when he went there.

This painting, which probably dates from between 458 and 447 BCE[2], was by Polygnotus, who intended to put the painting above Neoptolemos’ tomb (10.26.4). This painter, according to Pausanias, was also mentioned by Simonides:

At this part of the painting there is also an elegiac couplet of Simonides:

Polygnotus, a Thasian by birth, son of Aglaophon,
Painted a picture of Troy’s citadel being sacked.
Simonides, unknown location.

The description of the painting is very detailed and tells a lot about what happened after the events of the Iliad. Therefore we find a lot of information about the different myths and versions concerning Troy.

There is a very poignant depiction of the Trojan women, which evokes what we can read in Euripides’ Trojan Women. 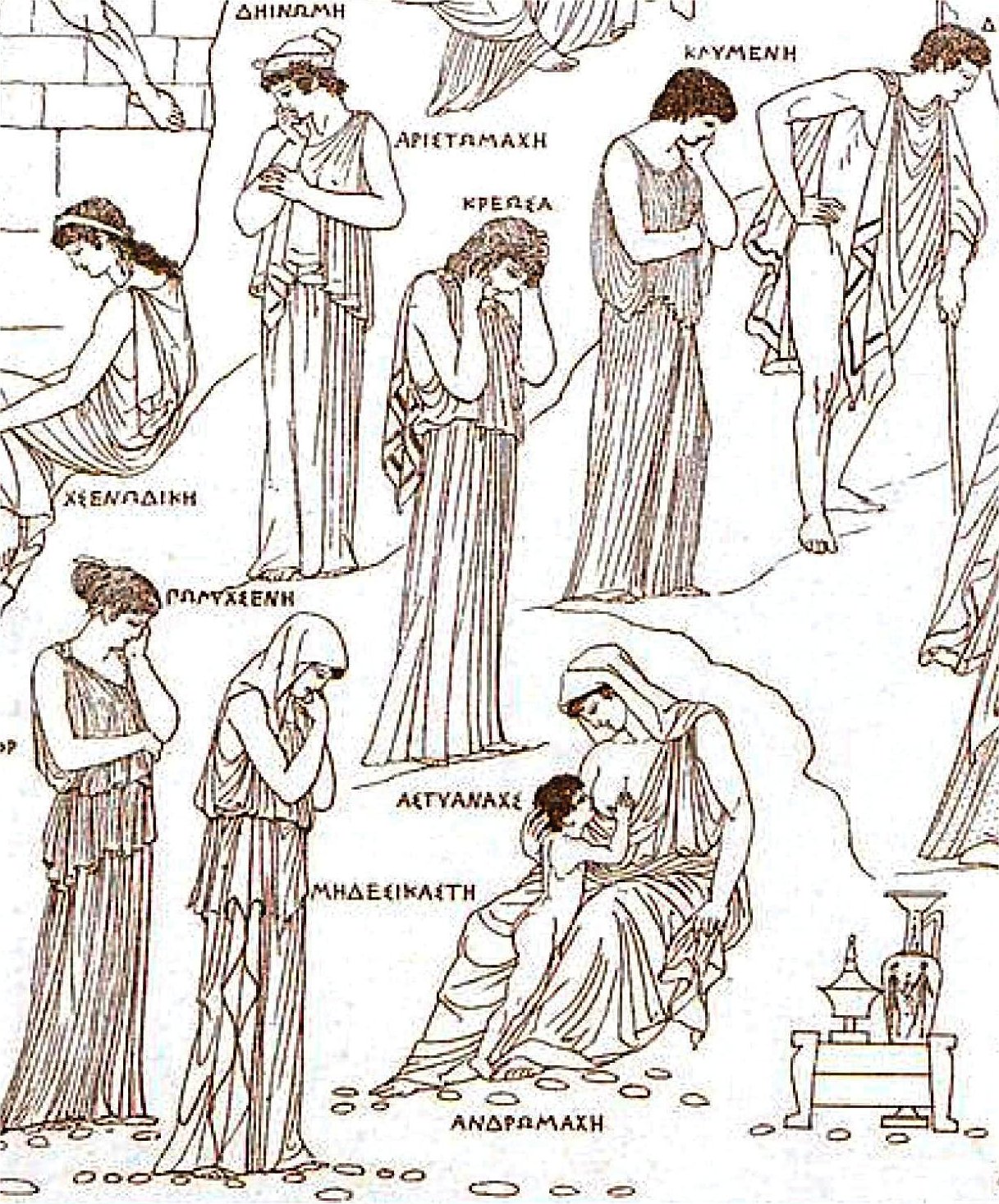 {10.25.9} The Trojan women are represented as already captives and lamenting. Andromache is in the painting, and near stands her boy grasping her breast; this child Lescheos says was put to death by being flung from the tower, not that the Greeks had so decreed, but Neoptolemos, of his own accord, was minded to murder him. In the painting is also Medesicaste, another of Priam’s illegitimate daughters, who according to Homer[3] left her home and went to the city of Pedaeum to be the wife of Imbrios, the son of Mentor.

{10.25.10} Andromache and Medesicaste are wearing hoods, but the hair of Polyxena is braided after the custom of girls. Poets sing of her death at the tomb of Achilles, and both at Athens and at Pergamon-on-the-Kaïkos I have seen the tragedy of Polyxena depicted in paintings.

Polygnotus also depicted figures from the Achaean side and Pausanias provides further context for the scene and for their subsequent stories.

Menelaos’ entourage is described, and apart from Phrontis these people do not appear in the Iliad, Odyssey or the plot-summaries of the Epic Cycle: 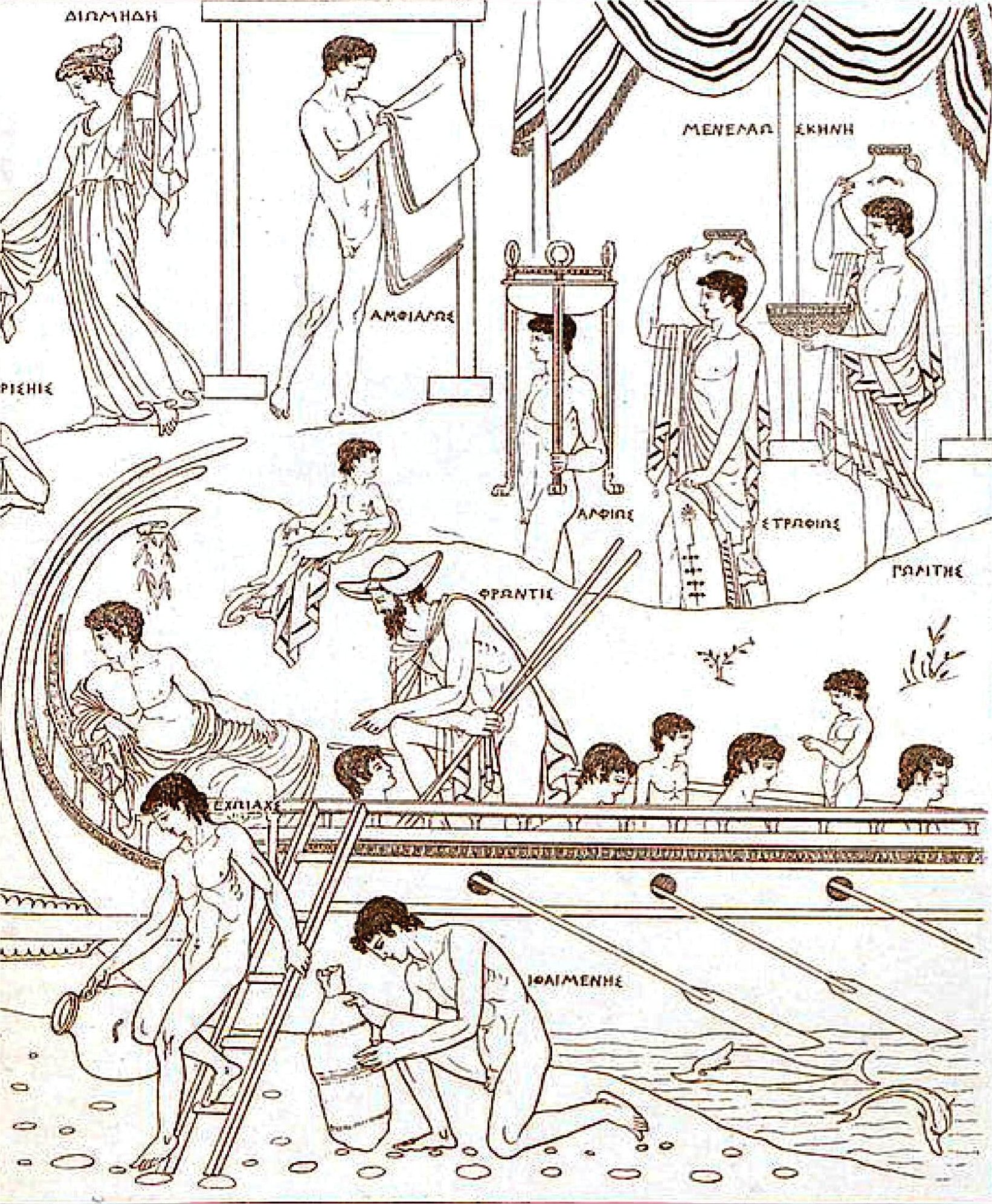 On the ship of Menelaos, they are preparing to put to sea. The ship is painted with children among the grown up sailors; amid ships is Phrontis the steersman holding two boat hooks. Homer[4] represents Nestor as speaking about Phrontis in his conversation with Telemachus, saying that he was the son of Onetor and the steersman of Menelaos, of very high repute in his craft, and how he came to his end when he was already rounding Sunium in Attica. Up to this point, Menelaos had been sailing along with Nestor, but now he was left behind to build Phrontis a tomb and to pay him the due rites of burial.

{10.25.3} Phrontis then is in the painting of Polygnotus, and beneath him is one Ithaemenes carrying clothes, and Echoeax is going down the gangway, carrying a bronze urn. Polites, Strophios, and Alphios are pulling down the hut of Menelaos, which is not far from the ship.

{10.26.3} There is also Odysseus […] and Odysseus has put on his corselet. Ajax, the son of Oileus, holding a shield, stands by an altar, taking an oath about the outrage on Cassandra. Cassandra is sitting on the ground, and holds the image of Athena, for she had knocked over the wooden image from its stand when Ajax was dragging her away from sanctuary. In the painting are also the sons of Atreus, wearing helmets like the others; Menelaos carries a shield, on which is figured a serpent as a memorial of the prodigy that appeared on the victims at Aulis.

Neoptolemos is depicted, and Pausanias provides a detail from the Cypria that is not included in the Proclus plot-summary: 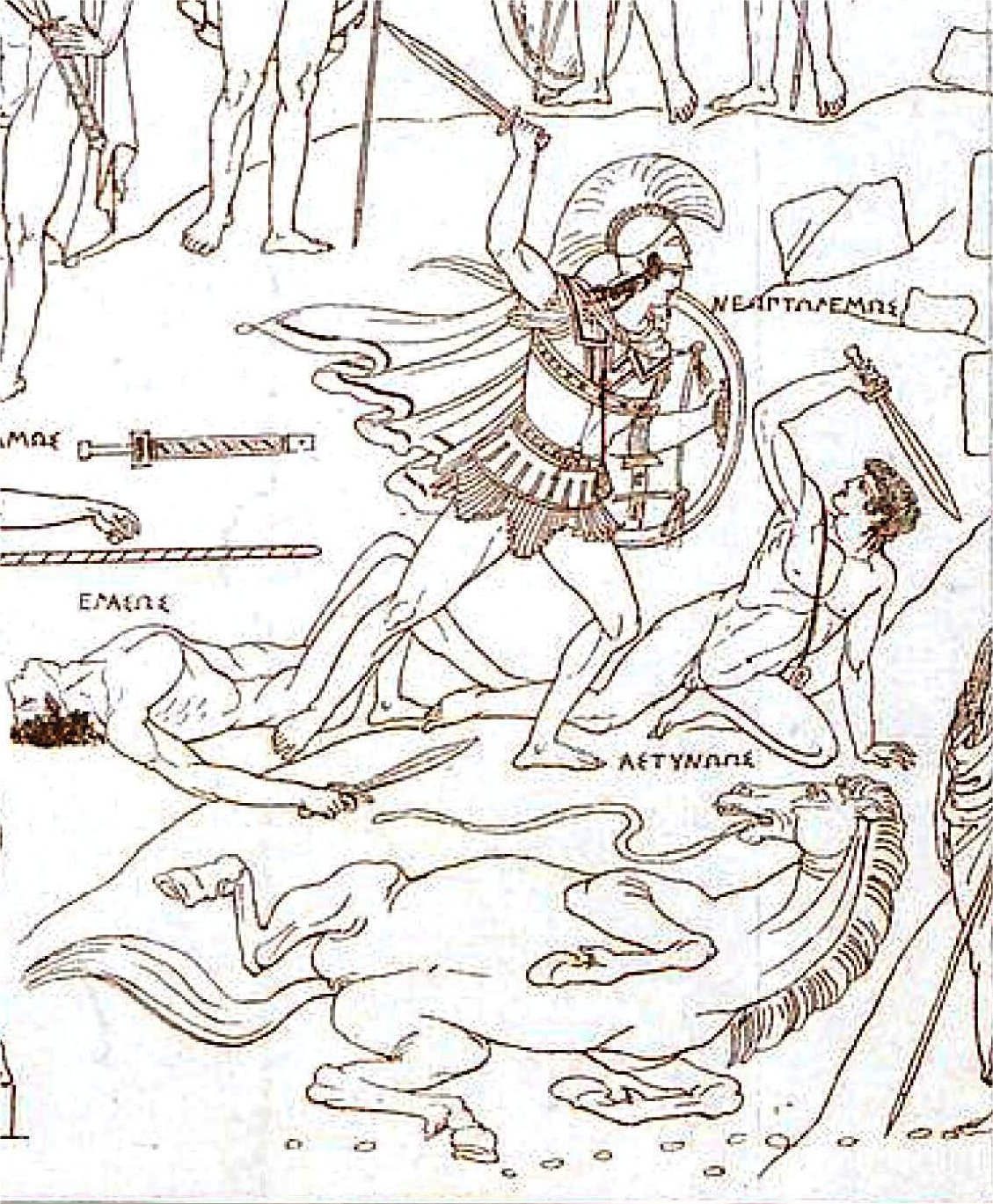 Neoptolemos is the only one of the Greek army represented by Polygnotus as still killing the Trojans, the reason being that he intended the whole painting to be placed over the tomb of Neoptolemos. The son of Achilles is named Neoptolemos by Homer in all his poetry. The epic poem, however, called Cypria says that Lykomedes named him Pyrrhos, but Phoenix gave him the name of Neoptolemos (young warrior) because Achilles was but young when he first went to war.

Pausanias describes some of the corpses in the painting, among whom is Priam:

Lescheos says that Priam was not killed at the hearth of the Courtyard God, but that he was dragged away from the altar and fell an easy prey to Neoptolemos at the gate of his own palace.

Other people mentioned include:

Also in the same location at Delphi Pausanias describes another painting by Polygnotus, depicting Odysseus’ descent into Hades and those he encountered there, with which we are most familiar from the account in Odyssey 11.

Pausanias makes an interesting observation that might indicate Polygnotus’—and indeed the general—attitude to Odysseus: 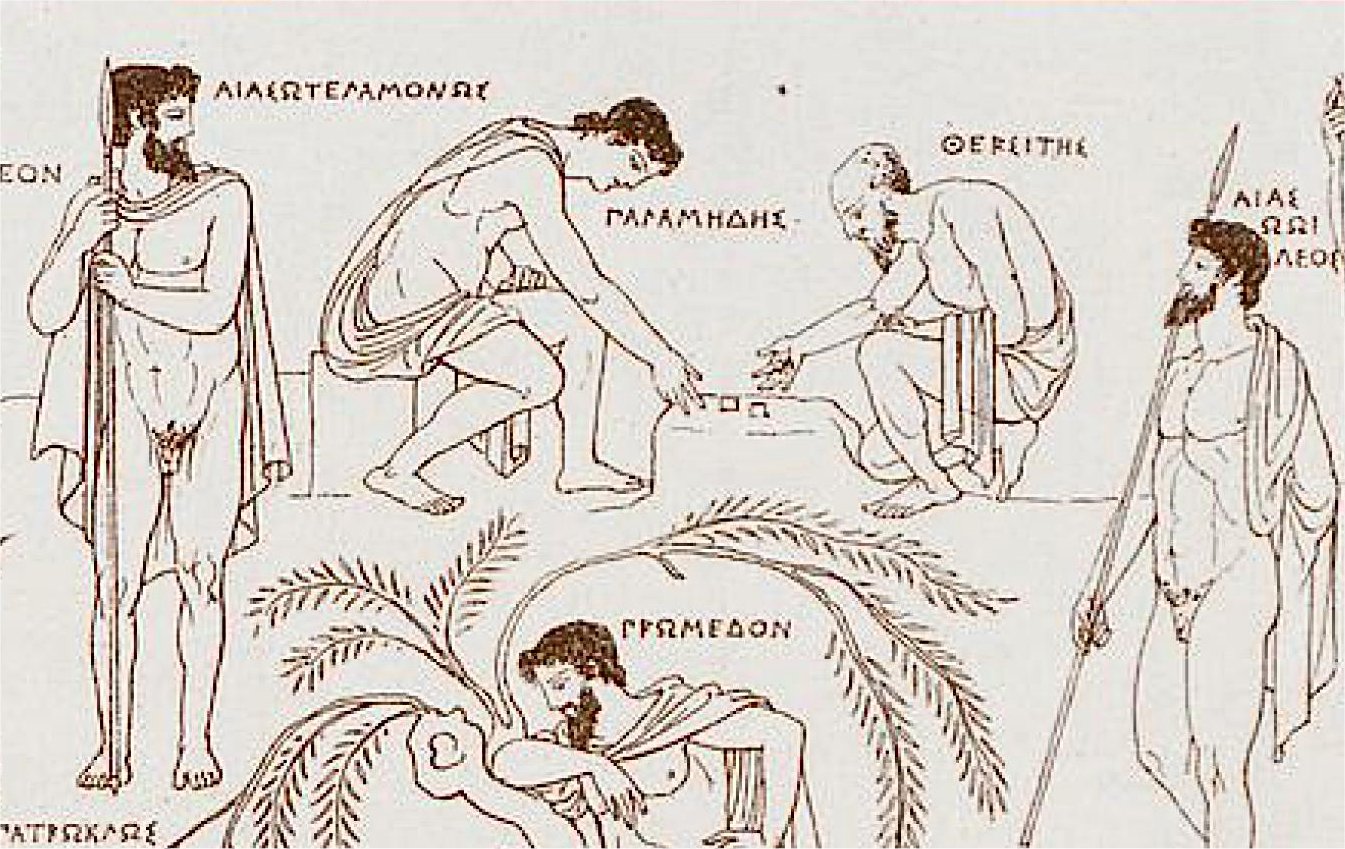 {10.31.1} If you turn your gaze again to the upper part of the painting, you see, next to Actaeon, Ajax of Salamis, and also Palamedes and Thersites playing with dice, the invention of Palamedes; the other Ajax is looking at them as they play. …

{10.31.2} Polygnotus has intentionally gathered into one group the enemies of Odysseus. Ajax, son of Oïleus, conceived a hatred of Odysseus, because Odysseus urged the Greeks to stone him for the outrage on Cassandra. Palamedes, as I know from reading the epic poem Cypria, was drowned when he put out to catch fish, and his murderers were Diomedes and Odysseus.

Also in this painting: 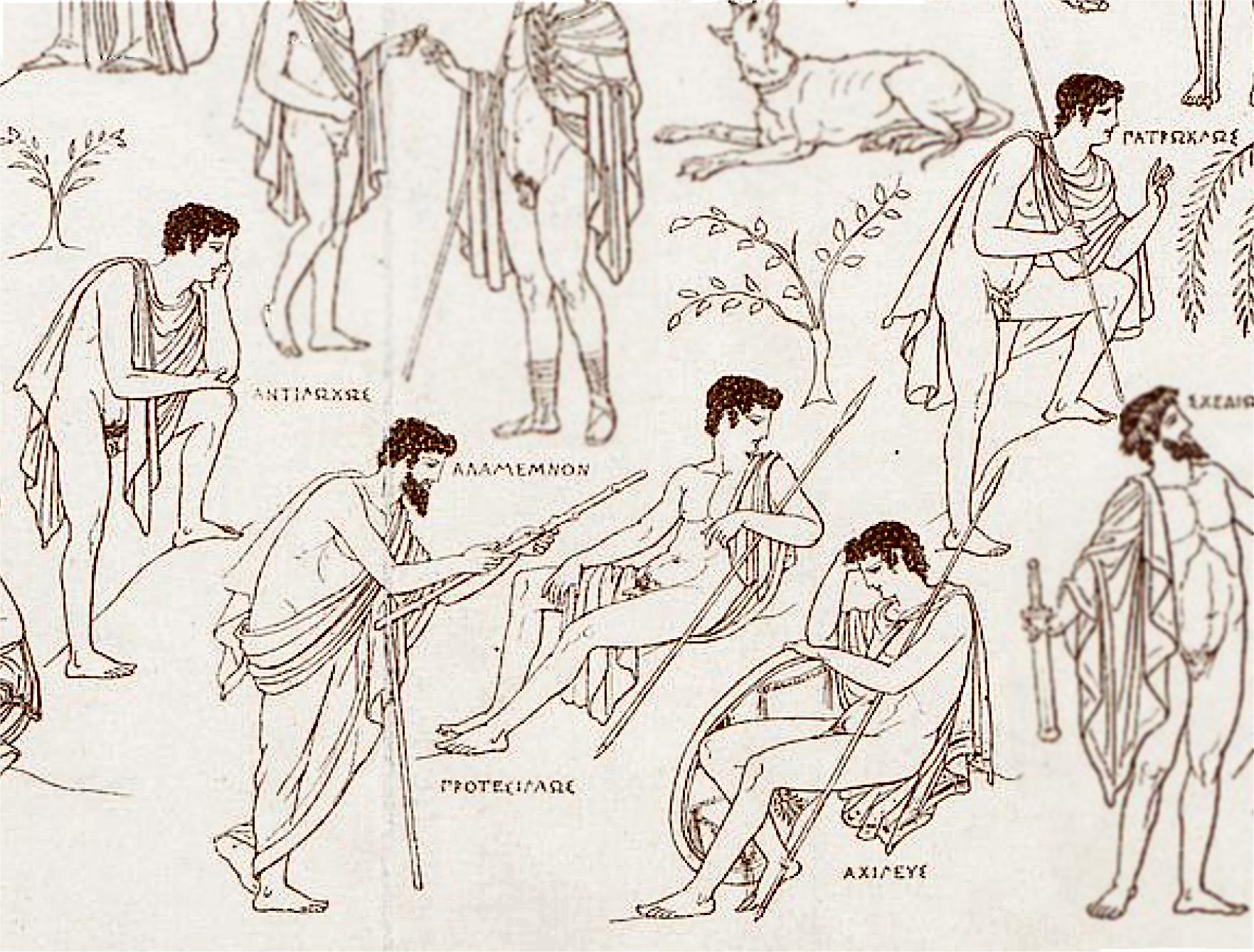 … is Antilokhos, with one foot upon a rock and his face and head resting upon both hands, while after Antilokhos is Agamemnon, leaning on a scepter beneath his left armpit, and holding up a staff in his hands. Protesilaos is seated with his gaze fixed on Achilles. Such is the posture of Protesilaos, and beyond Achilles is Patroklos standing. With the exception of Agamemnon, these figures have no beard.

Not all these people appear in Hades in our Odyssey.

Polygnotus was born around c. 500 BCE, in Thasos, which is situated in Thrace, and he died c. 440 BCE in Athens. He was a famous painter, who painted large monumental wall paintings in a Classical style. Unhappily none of them have been found, but the Greek traveler Pausanias left an account of two paintings which were situated in Delphi: the Iliupersis  and the Nekyia. Polygnotus used four basic colours: black, white, red, and ochre. [6]

In the 19th century, Carl Robert (1850–1922[7]) analysed the details of Pausanias’ description of the paintings, and attempted a reconstruction of them in the volumes Des Iliupersis des Polygnot[8] and Die Nekyia des Polygnot.[9]

The images illustrating this post show details from those reconstructed versions.

[1] This and all other quotations from Pausanias are taken from Description of Greece: A Pausanias Reader, Translation based on the original rendering by W. H. S. Jones, 1918 (Scroll 2 with H.A. Ormerod), containing some of the footnotes of Jones. The translation is edited, with revisions, by Gregory Nagy.
https://nrs.harvard.edu/urn-3:hlnc.prim-src:A_Pausanias_Reader_in_Progress.2018-

[5] For further discussion of Aethra, see ‘Helen’s Handmaiden’ on this website.

[6] Adapted from an article revised and updated by Amy Tikkanen for Encyclopedia Britannica.
https://www.britannica.com/biography/Polygnotus

[7] Personal information on Catalogue for Libraries of the University of Heidelberg, online at:
https://katalog.ub.uni-heidelberg.de/cgi-bin/indexinfo.cgi?gnd=116575956

Details from Carl Robert (1850–1922) and Hermann Schenck, Reconstruction of the ancient painting “Nekyia” by Polygnotus. 1892.
public domain, via Wikimedia Commons.

Hélène Emeriaud and Sarah Scott are members of the Kosmos Society.