Previously, Part 1 of this post discussed hoplite warfare and how the battle of Mantinea demonstrated the advantage of professionalism. Part 2 considers how the battles of Leuctra and Gaugamela continued the development of Greek and Macedonian warfare.

The end of the Peloponnesian War did not bring the promised “…beginning of freedom for all of Greece.”[1] Instead, Sparta provoked a series of wars which rearranged the system of alliances which had helped them win the long war against Athens. A peace conference between Sparta and Thebes in 371 ended badly and the Spartans promptly marched upon Thebes with an army of nine thousand hoplites and one thousand cavalry. Opposing them were six thousand Theban and allied hoplites and one thousand cavalry.[2]

Over generations, the Thebans had been increasing the depth of their phalanx, generally given pride of place on the right wing of coalition armies, from the traditional eight men, to sixteen, then twenty-five and even thirty-five ranks. As the Spartan and Theban armies maneuvered toward the plain of Leuctra, the brilliant Theban general Epaminondas devised a new tactic which would use the deep phalanx to destroy the myth of Spartan superiority.

Over the generations, the citizens of Thebes had developed a reputation as tough, unyielding fighters. Epaminondas had witnessed the power of the deep Theban phalanx at previous battles, and increased the depth of the phalanx to fifty ranks, but only eighty files wide. But Epaminondas’ true innovation was to position the deep Theban column not on the right, where it would have clashed with the Spartan’s weaker allies, but on the left, where it would attack the main phalanx of the Spartan “Peers” led by King Cleombrotus, arranged only twelve ranks deep. In other words, Epaminondas was concentrating his fighting power at the critical point in the evenly-spaced, less concentrated Spartan phalanx. Finally, he arranged the Theban’s allies on his right would advance “in echelon”, each poleis’ phalanx staying slightly to the rear of that to its left, so that the allied right would protect the Theban’s flank, but not initially engage with the enemy (see Leuctra map – ‘Initial Situation’). When asked why he positioned the Theban phalanx opposite the Spartan king, Epaminondas stated he would “crush…the head of the serpent”.[3] 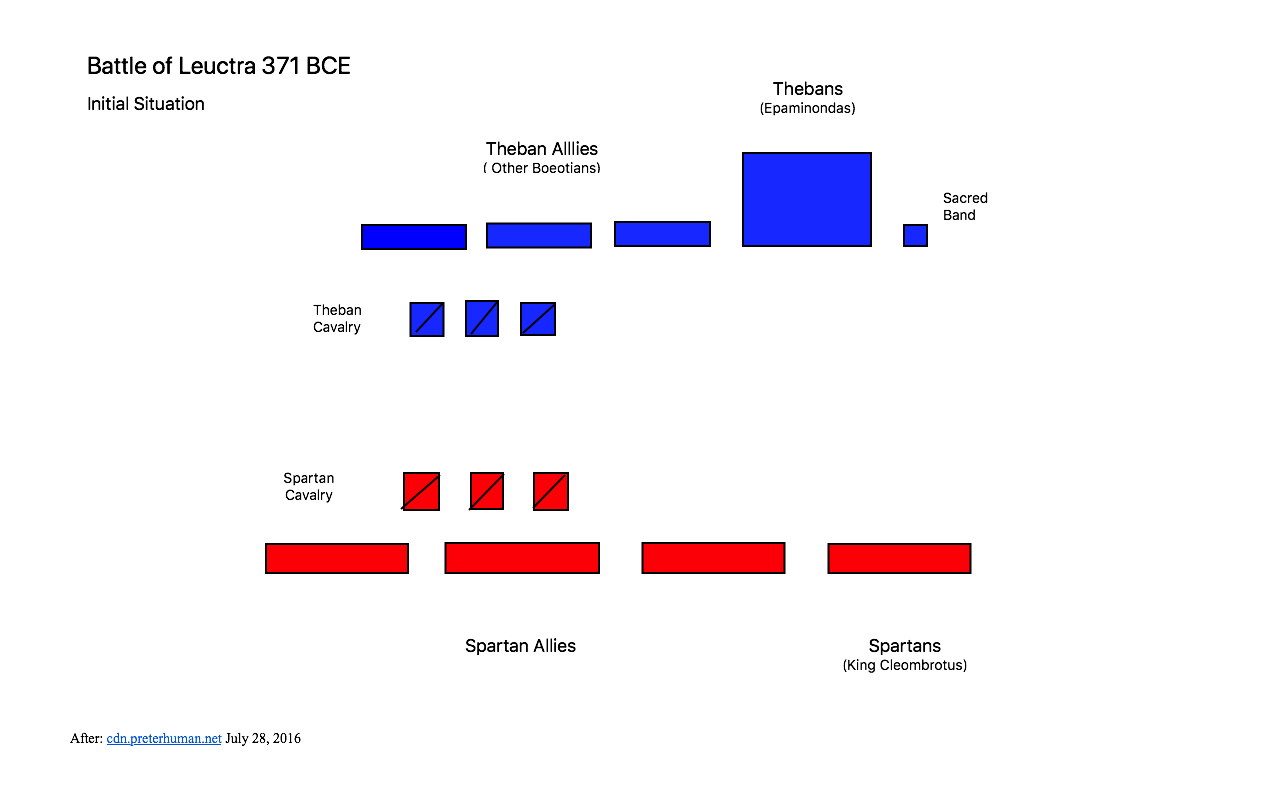 As the Spartans began their usual drift to the right, they assumed their superior numbers would allow their force to overlap both the Theban left and right. But as they advanced, the Spartans were surprised to see the deep Theban phalanx moving both forward and to its left, converging rapidly on the right wing of the Spartan line where the king was surrounded by his bodyguard (see map ‘Opening Moves’). 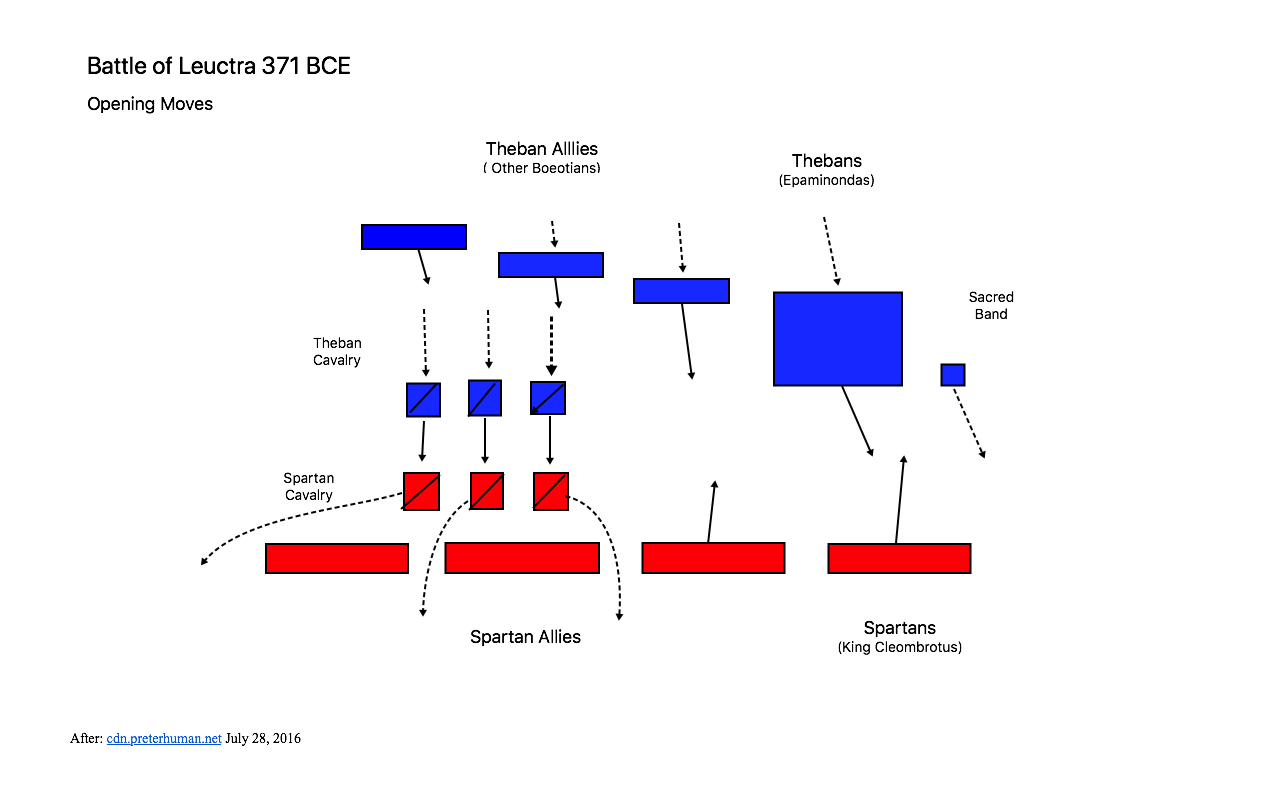 As the phalanxes collided, a bitter struggle was carried out between the Thebans and the Spartan elite, with neither side gaining ground although the Spartan king was killed or mortally wounded. Epaminondas, fighting in the first ranks, shouted to his troops to “give me one more step” forward, and with that step, the Spartans turned and ran (see map ‘Decisive Action’). Four hundred of the seven hundred Peers at the battle were killed, and Sparta’s reputation for invincibility in hoplite battle was ended. Epaminondas’ brilliance in concentrating his most powerful force in depth against the enemy’s more evenly-distributed line, and “refusing the flank” of his weaker right wing, allowed Thebes to overcome the life-long training and superior professionalism of the Spartan phalanx.[4] 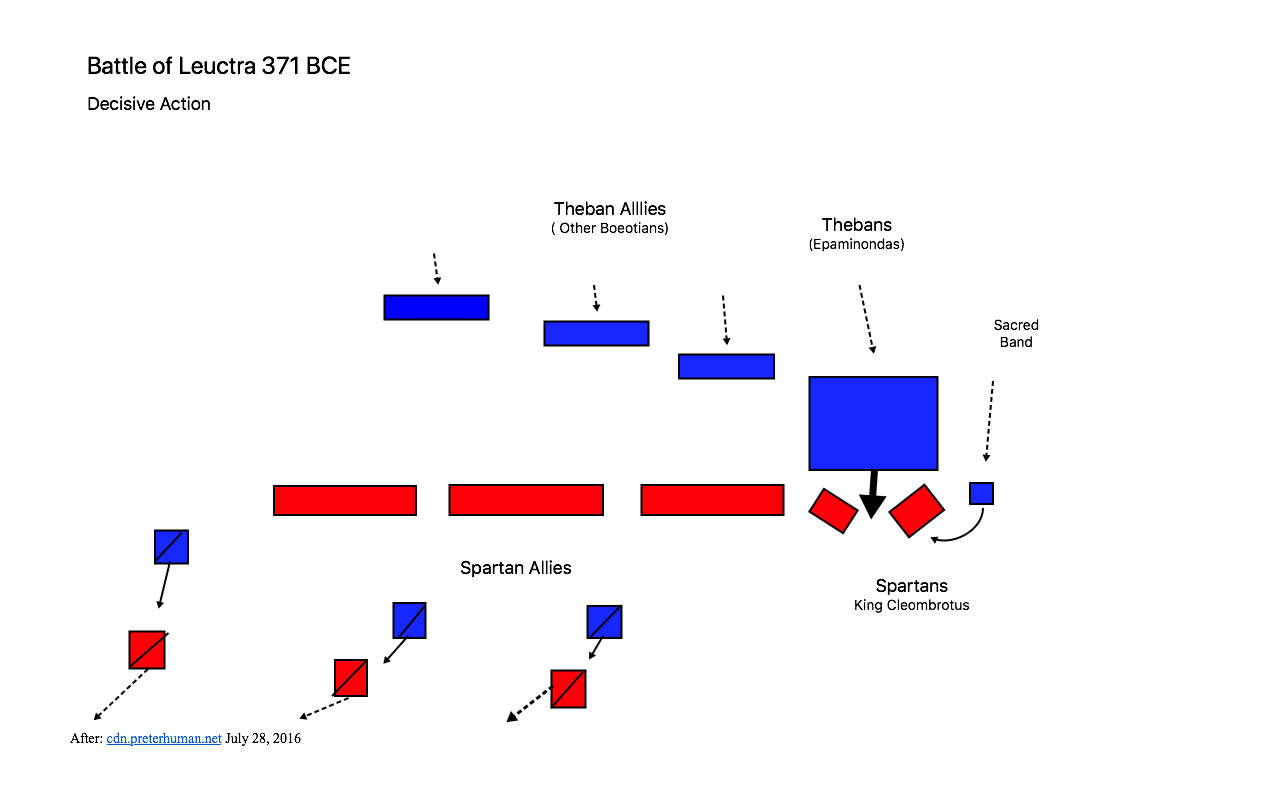 The Power of Mobility—Gaugamela 331 BCE

Far to the North in Greece lies Macedon. In 336 BCE, twenty-year old Alexander III (“the Great”) inherited the throne and the Macedonian army from his father, Philip II. Philip had been a hostage in Thebes during the time of Epaminondas, and he appears to have incorporated the knowledge he acquired there into his army. Philip increased the length of the hoplite spear from seven to eighteen feet, making it a two-handed weapon, and reduced the weight of armor and size of the shield of his “phalangites”. Similarly, Philip professionalized the king’s guard of mounted aristocrats, gave them heavy armor, a longer two-handed spear, and turned them into his shock troops, the heavy “Companion Cavalry”.[5]

In 334 BCE, Alexander led an army of Macedonians and allied Greeks, totaling 37,000 men, against the enormous Persian Empire, which stretched from what is now Turkey to Pakistan. Alexander’s army consisted of 12,000 Macedonian “Foot Companions” using the 18-foot spear, 3,000 Royal Guards (‘Hypaspists’) armed with a shorter spear, and 1,800 Companion Cavalry. His Greek allies provided 9,000 hoplites and cavalry, supplemented by light armed troops from Northern Greece.[6]

After defeating two Persian armies in what is now Turkey and clearing the Mediterranean coast in 332, Alexander took his army deep into the Persian Empire, reaching the Tigris River in what is now Iraq in 331.

King Darius of Persia drew soldiers from provinces stretching all the way to India, raising a giant army of perhaps 100,000 men, strong in cavalry although lacking in heavy infantry. Darius chose the wide, flat plain at Gaugamela, where he believed his great mass of cavalry would have an advantage over the outnumbered Macedonians. He cleared and smoothed the plain to his front so that his 200 chariots and 15 war elephants would have a clear run. The Macedonian army is believed to have been increased to about 45,000 by this time.

Darius placed his best troops in the center, alternating horse and foot soldiers, with his chariots and elephants out front. On his right and left wings he placed masses of cavalry. A second line, consisting of native infantry levies, backed up the strong front line. Darius’ plan was to envelope both wings of Alexander’s army with his thousands of cavalry, immobilize the Macedonian phalanx, and then crush the center with his chariots and combined horse and foot.[7]

Arriving at the battlefield, Alexander led the army from the center-right with the Companion Cavalry, followed by the Hypaspists, with the phalanx of Foot Companions arranged across the center in their individual brigades. The left and right wings, consisting of Macedonian and allied cavalry, were angled back to protect the army from the outflanking attacks Alexander expected Darius to make with his vast number of cavalry. The Greek infantry was posted at a distance of two or three hundred yards to the rear of the Macedonian phalanx, with instructions to be prepared to face enemy attacks either from the front or rear. Essentially, Alexander had created a box formation from which he could attack while keeping Darius’ greater numbers from enveloping his army. Marching to the attack, Alexander proceeded to maneuver this box to disrupt the Persian line of battle (see Gaugamela map ‘Initials Dispositions and Opening Movements’.)[8] 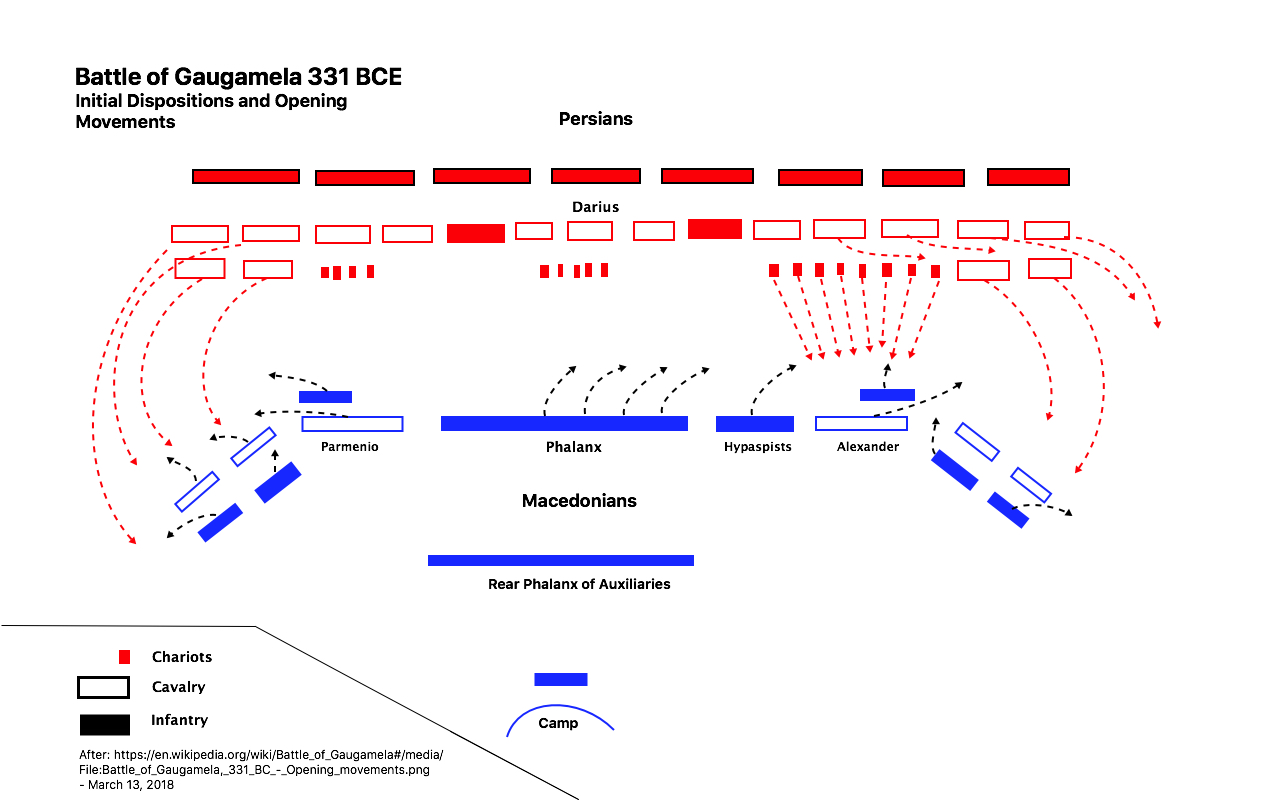 As Alexander’s army moved toward the Persians, he ordered the center to begin a simultaneous move to the right, and the Macedonians responded, moving echelon by echelon diagonally toward the Persian left wing. Concerned, Darius responded by ordering the cavalry on his left center to match the Macedonians’ movement, extending their line to their left. He also launched his left and right wing cavalry to attack the Macedonian flanks in an attempt to stop Alexander’s maneuver. As described by the ancient writer Arrian:

Alexander led his own army more towards the right, and the Persians marched along parallel with him, far outflanking him upon their left… and almost entirely got beyond the ground which had been cleared and leveled by the Persians.[9]

Alexander’s army was now closing on the Persian left center, with the concentrated power of the heavy cavalry and the Macedonian phalanx aimed, echelon by echelon, toward the heart of Darius’ formation. As the Persians marched to their left to match Alexander’s oblique approach, they opened a gap in their front line, the very result toward which Alexander had been maneuvering:

But when the Persians had made a break in the front line of their army…Alexander wheeled round towards the gap, and forming a wedge as it were of the Companion cavalry and of the part of the phalanx which was posted here, he led them…straight towards Darius himself. For a short time there ensued a hand-to-hand fight…all things at once appeared full of terror to Darius, who had already long been in a state of fear, so that he was the first to turn and flee.[10] 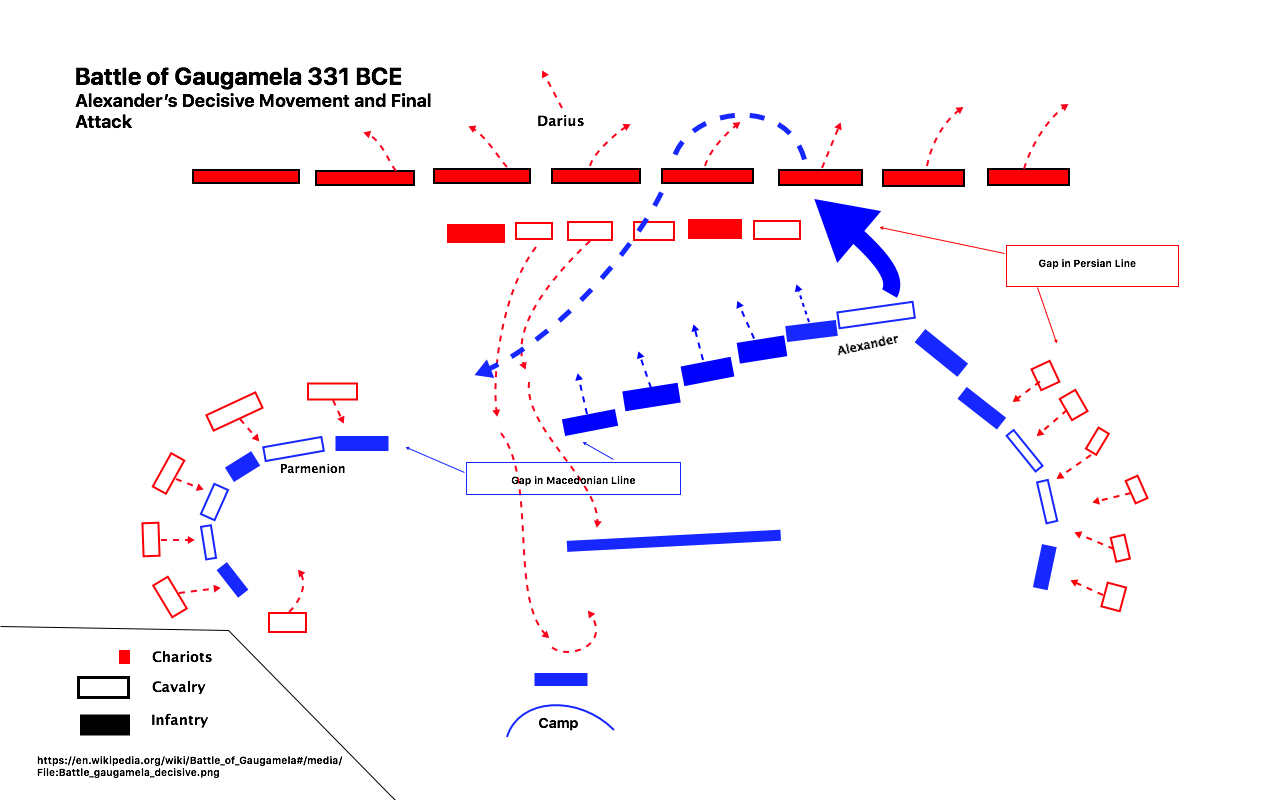 With Darius running from the battlefield, the Persian army began to break up, especially the native levies in the second line. Alexander was tempted to follow Darius in order to effect his capture and end the war. But a messenger reached him, informing him that his left wing was in danger of being overwhelmed by the right wing Persian cavalry. Alexander gathered the Companion Cavalry and re-crossed the battlefield to attack the Persian cavalry on their flank and rear and end the battle.

At the Battle of Gaugamela, Alexander employed all the tactical advances which the Greeks and Macedonians had developed over the previous one hundred years. He led an all-arms army of both heavy and light infantry and heavy and light cavalry; each formation was subdivided into units which allowed the army to maneuver effectively on the battlefield; Alexander used his ability to maneuver to create confusion in the enemy’s ranks, and then attacked with concentrated combat power, allowing him to defeat an enemy army twice the size of his own.

Between 431 and 331 BCE, the Greeks, and the Macedonians following them, transformed phalanx warfare, and created a dynamic, all-arms form of combat which would dominate the Eastern Mediterranean and Western Asia for the next two hundred years.