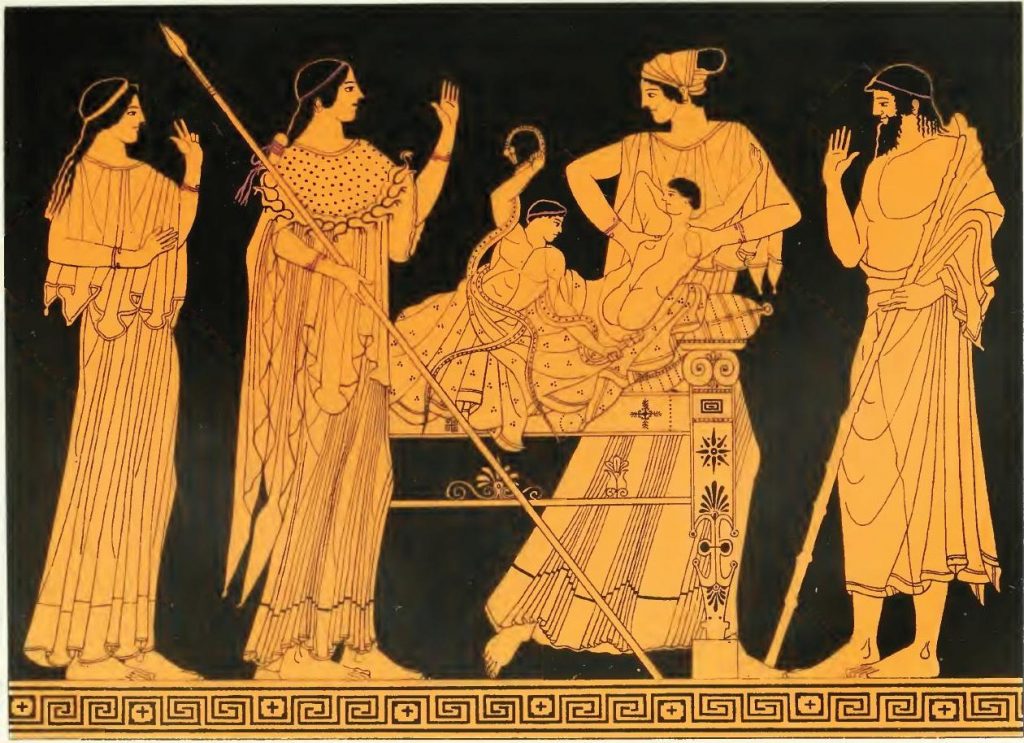 Sacred precinct where Alpheus comes to rest and catches breath[1], Ortygia, child of famed Syracuse, bedstead of Artemis, sister isle of Delos, from you my sweet-voiced hymn proceeds to set forth great ainos of storm-footed horses, gifts of Aetnaean Zeus.

Nemea spurs on the chariot of Khromios[2] to yoke song fit for victory procession with the accomplishments that have brought victory. Beginnings given by gods were thrust forward with godlike excellence of that man. There is in complete success a peak of universal fame and the Muse loves to remember great contests. Spread now splendor over the island that Zeus, who rules Olympus, gave to Persephone and granted to her with the nod of his awesome locks that Sicily excellent in fruit of the soil would be raised with rich crowns of cities. Zeus also gave her a suitor of bronze war, a warrior people that often would be included in the golden leaves of Olympic olive wreaths. Lighting on the fit time of many victories this people has truly hit the mark.

I stand at the doors to the court as I sing the wonderful accomplishments of a guest-friendly man where for me a fitting banquet has been laid out as a festive adornment and often the home hosts travelers from afar. As against naysayers he has surrounded himself with good men like water on smoke and fire[3]. Different people have different gifts and arts. It behooves one walking in straight ways to carry on the fight with the strength of one’s nature: Strength prevails through deeds; the mind prevails through wise counsel, and foreseeing what is to come is native to those good qualities. Son of Agesidamos, your way is to use both strength and mind. I don’t care for holding a lot of wealth hidden away in a palace, but I am satisfied with whatever there is and to fare well and be well thought of among friends, for the common hopes of industrious men go forward for the whole community. As a counterexample to idle wealth I gladly hold up among the great peaks of excellence the example of Herakles, as I urge forward the ancient logos, telling how when the child of Zeus was just leaving his mother’s womb in the throes of labor and coming into the shores of light with his twin brother, how when he stepped into crocus-colored swaddling clothes he did not escape the notice of Hera, but she, the queen of the gods, her heart consumed by a fit of quick temper, immediately dispatched dragon-like vipers. These snakes slithered past open doors into the innermost chamber of the bedroom, eager to ensnare and engulf the children in their sharp jaws. But he righted his head in quick response and took on his first trial of battle as he grabbed with his two ineluctable hands the two serpents by their necks. For the beasts in his stranglehold time snuffed out the lives from the snakes’ unspeakable frame members. At that moment unbearable fear and anguish struck the women attending Alkmene’s bed, for you see, she jumped from her bed to her feet without bothering to put on clothes and rushed to ward off the violent attack of the beasts. Quickly, again, commanders of the Thebans gathered and ran advancing with bronze weapons and Amphitryo brandishing in hand his unsheathed glistening naked sword came running, stricken with anguish. The dear one in one’s own house weighs heavily on all alike, but a heart is quickly relieved when it comes to another’s loved one.

He stood in amazement that was at once hard to bear and a source of joy, as he recognized the exceptional will and capacity of his son. The immortals, for their part, issued an announcement gainsaying the first pronouncements of the messengers, and Amphitryo called on his neighbor Teiresias the upright seer and prophet, most excellent interpreter of Zeus the most high god. Teiresias in turn, pointing to the future, declared to Amphitryo and the whole gathered host of soldiers the hazards and fortunes young Herakles would encounter:—

How many lawless beasts he would kill on land, how many he would kill in the sea’s crossings, and he said he would deal doom to a most despicable man who swaggered with insatiable insolence[4]. And he said that when the gods would do battle with the giants on the plain of Phlegra, radiant hair was doomed to fall headlong into the dust under the hurricane force of Herakles’ arrows. But at last in peace continuously for all time he would obtain rest from his great labors as a prized reward in the homestead of the blest after he receives eternally youthful Hebe as his bride and celebrates his wedding feast in the house of Zeus the son of Kronos, thenceforward to live in praise and content compliance with sacred[5] law.

[1] Applied to Alpheos’ mythic mouth (end point) where his waters were said to mix with the spring waters of Arethusa, Pindar’s polysemous ἄμπνευμα is a stroke of genius, expressing that Ortygia is both the place where the river god spouts up water and where he comes to rest after the long chase of transformed Arcadian nymph Arethusa. Strabo (1st century BCE–CE), in a passage in which he expressly takes up issues raised by this passage, which he directly quotes, at Geography 6.7.2, understood Pindar seriously to present Alpheos as running under the Ionian Sea and coming up on Sicilian Ortygia, mixed with Arethusa, in line with preexisting myth (Alpheos hunter chasing Arethusa huntress nymph—Alpheos transformed into river god (running from source in Arcadia and through Elis to and under the sea), Arethusa into spring—Alpheos catching up with and mingling with the waters of Arethusa (nymph by now metamorphosed into spring feeding the sea) on Ortygia). Strabo explodes the myth by pointing out (1) Alpheos can be seen dumping into the salty sea and (2) Arethusa is a fresh-water spring. Still it is a beautiful mythic story (aition) that Pausanias (5.7.1–3) a century or so later, quoting the Delphic oracle given to the Heraklid Corinthian oikist of Syracuse, Archias, refuses to disbelieve. Pindar’s poetic conceit echoes the oracle quoted by Pausanias that, according to tradition, had been given to Syracuse’s legendary Bacchiad-Heraklid founder Archias.

[2] Khromios was a Sicilian general who served the Dorian monarchs of Syracuse and other Sicilian poleis and colonies of Syracuse. He is the celebrated victor in Pindar’s Nemean 9, which is actually not celebrating a Nemean victory, but a victory at Sikyon (non-Panhellenic games) (the last odes in the book of Pindar’s Nemean odes celebrate other contests.) His real or imagined connection with Herakles through Heraklid descent or associations may at least in part explain the prominence of Herakles in Nemean 1.

[3] LSJ explains καπνός as a metaphor for envy. Other commentators, reaching for an unattested Greek proverb, wonder why water on smoke and not water on fire—not appreciating the poet’s license to deprecate carpers’ fire by referring to it metonymically as smoke. Khromios surrounds himself with good men like himself who are proof against reproach. For more information see Farnell (1932), pp 256ff.

[4] According to the tradition transmitted through the scholia, this refers to Busiris and Antaios. Both are Libyan monsters of sorts whom Herakles killed on his way to retrieve the golden apples of the Hesperides, and Teiresias’ prophetic gaze into the future could be read as spotting either or both. Antaios is specifically named in Isthmian 3–4. Here I think Pindar is projecting through Teiresias a poetically interesting ambiguity—is Teiresias seeing one (as enclitic τινα suggests) or both Libyan menaces? For another view, see Cookesley (accessed 28 March 2017.)

[5] Last line echo of σεμνόν in the first verse—a pointed example of “Ring-composition,” hallowed destinations in both cases.