Playing the Lyre: The Language of Lyre Playing in the History of Apollonius, King of Tyre 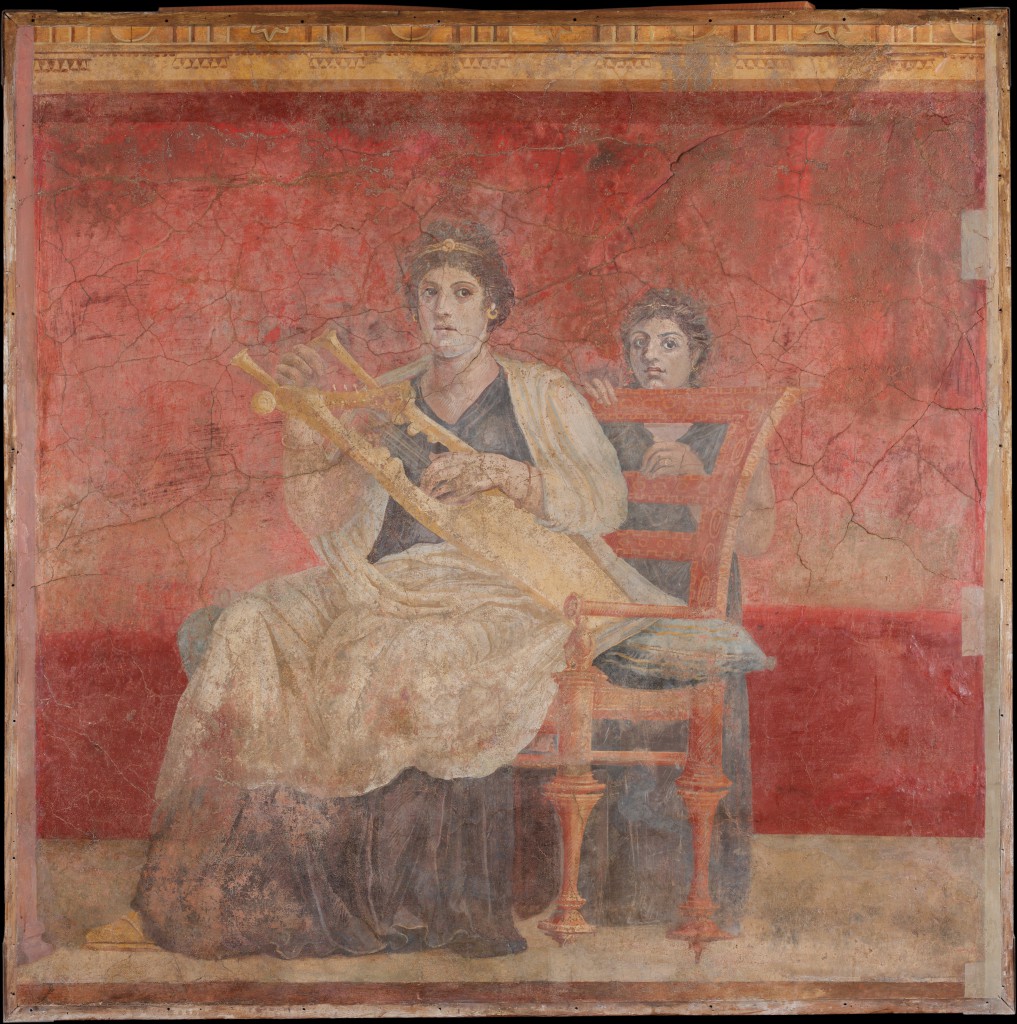 In the course of searching for simple texts for a student of Latin who has been making rather heavy weather of Agricola, and needed some light relief, I recently came across the History of Apollonius, King of Tyre, a Latin romantic novel of perhaps the third century CE. By the purest serendipity, I then found myself reading the following lines of the text, which rang a bell, or rather several bells, in my head. Followers of the Ancient Greek Hero in 24 Hours will scarcely need references to see the point:

Then the king [= Archistrates of Cyrenaica], seeing so much goodness in his daughter, [who had just given great gifts to the shipwrecked prince Apollonius] was very happy and said to her “Dearest child, bless you! Send for your lyre and drive away the young man’s [= Apollonius’] tears and cheer him up for the feast.” Then the girl commanded that her lyre be brought and, when she got it, she mixed the sounds of the strings with the great sweetness of her voice, tune with song. All those present at the banquet began to wonder, saying “nothing could be better, nothing sweeter than what we hear!”
But Apollonius alone was silent. So the king spoke to him saying “Apollonius, what you are doing is disgusting. Everybody is praising my daughter for her skill in music [artem musicam]. Why do you alone curse her with your silence?” Apollonius said “Lord king, if you permit, may I speak my mind: for your daughter claims competence [incidit] in the art of music, but she has not learnt [didicit] it. In short, order the lyre to be given to me, and you will straightway know what you did not know before.” King Archistrates said: “Apollonius, if I understand you, you are rich in all things” and commanded that the lyre be handed to him. Stepping outside, Apollonius put on the costume [status] and crowned his head with a garland, then, accepting the lyre, he entered the dining room. And thus he stood [stetit], so that those who were reclining at the table reckoned him not Apollonius, but Apollo. And so when there was silence ‘he took up the plectrum and set his mind [animus] to the art [ars].’ In the song his voice was blended harmoniously with the strings. Those who were reclining at table at one with the king began to shout in praise saying “he couldn’t be better, he couldn’t be sweeter!”
Then putting down the lyre, he came in dressed as a comic and acted out a mime with remarkable hand movements and dancing. Then he dressed in tragic costume, and so delighted them just as admirably, so that all the friends of the king declared that they had never heard or seen anything like it. 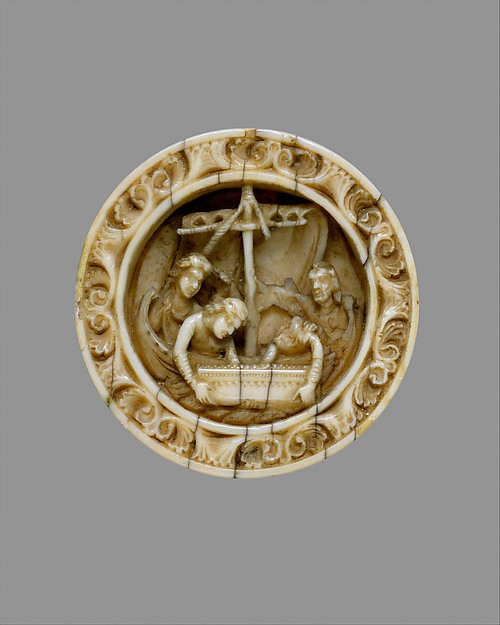 My first note is the word play comparing Apollonius to Apollo (non Apollonium, sed Apollinem). I am reminded that Achilles is Apollo’s antagonist, so that in the tent, lyre in hand, singing to Patroclus, Achilles is yet again to be compared to Apollo, a dangerous business at best.

My second note is that this is in fact only one of three word plays in the passage, and that all three are significant. The first word play is in Apollonius’ description: “your daughter claims competence [incidit] in the art of music, but she has not learnt it [non didicit].” The text is at some pains to emphasize that the “art” of music must be learnt. The word “incidit” can mean either “be competent,” or else “stumble upon,” “come across,” so the daughter has competence in music only insofar as she has “stumbled across it.” Apollonius’ learnt mastery of the instrument is therefore greater, even though both singers are described in exactly the same terms, as mixing their sweet voices with the sound of the tune on the strings of the lyre. Be that as it may, again, I am reminded of Patroclus, sitting listening—and learning?—in the tent, and I find it particularly significant that Apollonius is prepared to tell the king that he “will straightway know what [he] did not know before.” Another parallel involving learning, and incidentally also the concept of delight to the mind, is to be found in the Homeric Hymn to Hermes (Hermes is teaching Apollo to play the lyre):

Whoso with wit and wisdom enquires of it cunningly, him it teaches [didaskei] [485] through its sound all manner of things that delight the mind, being easily played with gentle familiarities, for it abhors toilsome drudgery; but whoso in ignorance enquires of it violently, to him it chatters mere vanity and foolishness.
Homeric Hymn 4 to Hermes, 482–488[3]

The listener is a learner.

The other play on words is in the contrast “he entered” (introivit) and “he stood” (stetit). This is very ably dealt with by J.M. Hunt in Apollonius Citharoedus (p. 284), who shows that there are other texts which make this contrast, and suggests that this is also the essence of drama, of parodos followed by stasimon. Hunt then goes on (p. 285) to point out that the word play is further extended by the contrast between Apollonius standing, and the reclining guests. Here the parallel with Achilles’ tent is not so obvious, but the interplay of Achilles and Patroclus seated, and then of Odysseus, Ajax and Phoinix entering, and of Achilles springing up to greet them is clearly from the same set of ideas:

Patroklos was the only other person there. He [= Patroklos] sat in silence, facing him [= Achilles], and waiting for the Aeacid [= Achilles] to leave off singing [aeidein]. Meanwhile the two of them came in—radiant Odysseus leading the way—and stood before him. Achilles sprang up from his seat with the lyre [phorminx] still in his hand, and Patroklos, when he saw the guests, rose also…
Iliad IX 190–195[4]

Yet another note is in the way the lyre is passed around. Nobody ever takes the lyre—the daughter must send for it, and it is brought to her. It is then passed (always in the passive voice) to Apollonius. So too Demodokos—“A servant hung Demodokos’ lyre on its peg for him.” (Odyssey viii 105) I am tempted to suggest that Patroclus would not get the lyre unless it were passed to him, though this never happens because he and Achilles are, of course, interrupted, and the song is not resumed, and I wonder to what extent this is similar to the way the scepter is passed in public debate. 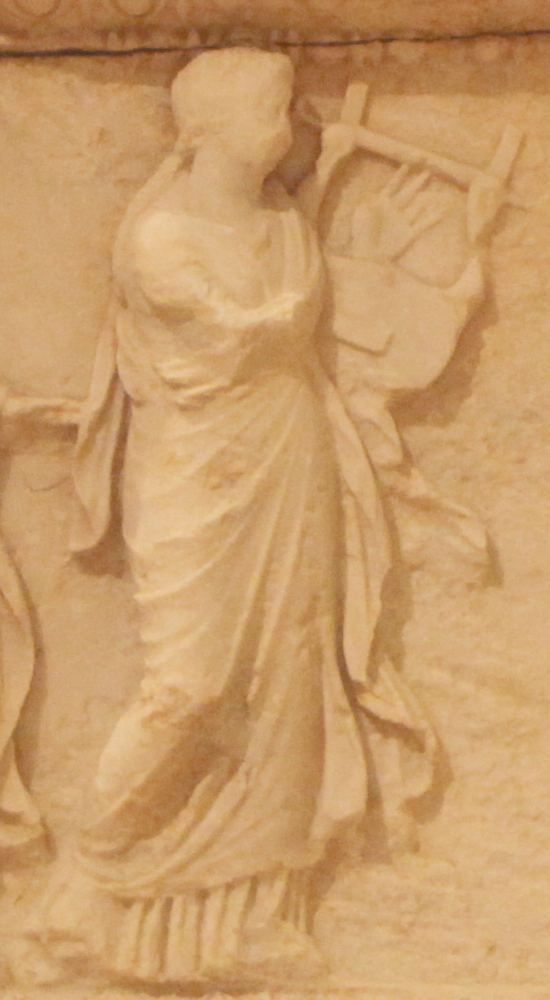 But most remarkable in the passage from the King of Tyre is the emphasis on clothing. The lyre player has a “status.” While the Latin word can mean much the same as the English “status,” it can also mean “carriage,” “position” and occasionally also “dress” or “clothing.” Here this last, which is otherwise attested only twice so far as I can find, once in Plautus (Amphitruo 1.1.111) and once in Suetonius (de Vita Caesarum, Tiberius 13), seems to be the only reasonable translation. Apollonius must put on special clothing, and a garland, if he is to play the lyre properly. The daughter, lacking the learning, apparently has no such requirement. This emphasis is carried further when Apollonius then proceeds to turn himself into first a mime, and then a tragic actor, each time going out and putting on new clothes. The implication would seem to be that the “status” (clothing) confirms his “status” (status) as a master musician, and possibly also as a prince.

I am left wondering whether others have perhaps come across other relevant texts which they would like to add to this one, to make a collection of descriptions of the actions of lyre players, and the rules governing their behavior, to go beyond what we have in Homer.

Brian Prescott-Decie is a senior instructor in the Department of Humanities at the Lebanese American University in Beirut.

Wall painting from Room H of the Villa of P. Fannius Synistor at Boscoreale, The Metropolitan Museum of Art, Rogers Fund, 1903 (OASC)
https://www.metmuseum.org/collection/the-collection-online/search/247009

Game Piece with a Scene from the Life of Apollonius of Tyre, The Metropolitan Museum of Art, Purchase, Stark and Michael Ward Gift, Joseph Pulitzer Bequest, and Pfeiffer and Dodge Funds, 1996 (OASC)
https://www.metmuseum.org/collection/the-collection-online/search/466289