Plutarch’s “On the Malice of Herodotus” 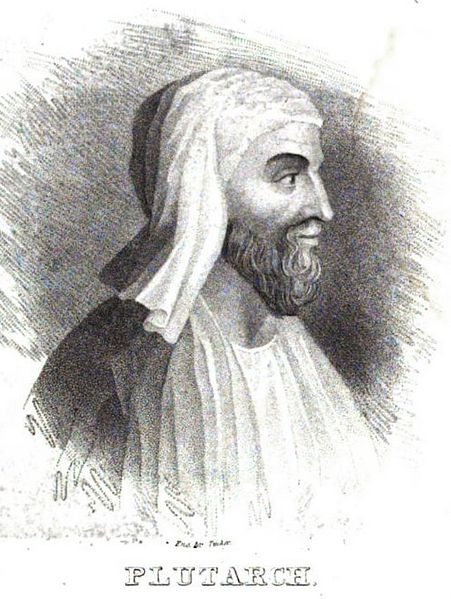 Plutarch’s essay on Herodotus has been described as “the world’s earliest known book review.”[1] We all have seen examples of this type of writing: a scathing review by a reviewer whose negative comments reveal an underlying bias against the author or his work that seems to obviate any pretense of an objective appraisal. Such an approach is puzzling in this case in that it seems so out of character for Plutarch and so inconsistent with his usual style of writing.

Plutarch’s essays (known collectively as the Moralia) are generally regarded as among the founders of this genre of literature, an archetype to be made famous by Montaigne and later used to good effect by Emerson and others.  One envisions an armchair philosopher, sitting before a fireplace with a glass of fine wine, amiably spinning out thoughts on a wide variety of topics, both profound and trivial.

A departure from this felicitous model, the essay in question has a title  (Περὶ τῆς Ἡροδότου κακοηθείας or “De Herodoti Malignitate“) that is generally translated into English as “On the Malice of Herodotus.” In it the usually mild-mannered and genial priest of Apollo levels criticisms and insults against Herodotus and his Histories of a kind that one might expect in a modern political campaign.  There is even the obligatory damning with faint praise, when Plutarch admits that Herodotus’ writing style is charming:

We must admit that Herodotus is an artist, that his history makes good reading, and that there is charm and skill and grace in his narrative, and that he has told his story “as a bard tells a tale,” I mean not “with knowledge and wisdom,” but “with musical dear-flowing words.” To be sure, these writings charm and attract everyone, but we must be on our guard against his slanders and ugly lies which, like the rose beetle, lurk beneath a smooth and soft exterior, we must not be tricked into accepting unworthy and false notions about the greatest and best cities and men of Greece.
(at 874b, trans. L. Pearson)

To be sure Plutarch was not the first to question the veracity of Herodotus. The accuracy of the works of Herodotus had been controversial since his own era. Duris of Samos, Aristotle, Cicero, Josephus, and Harpocration, among others, had commented upon this.[2] But Plutarch’s charges are among the most vitriolic and come from such an unlikely source. Plutarch shows his hand from the very beginning of his essay:

Many people, my dear Alexander, have been deceived by the style of Herodotus, which is apparently so simple and effortless, slipping easily from one subject to another; but more people still have suffered a similar delusion with regard to his moral character. Not only is it the height of injustice (as Plato puts it) “to seem just when one is not so,” but it is an act of supreme malice to put on a false show of good humour and frankness which baffles detection. And this is exactly what Herodotus does, flattering some people in the basest possible manner, while he slanders and maligns others.
(at 854f, trans. L. Pearson)

Plutarch’s knowledge is encyclopedic, his prose engaging, his vocabulary wide. So it could have been no accident that he chose words for Herodotus that were especially loaded. For example, at 857a he calls Herodotus a φιλοβάρβαρος [philobarbaros], meaning a “foreigner-lover” or, in this context, a “Persian-lover.” Use of the word φιλοβάρβαρος is first attested here and is almost unique, being found elsewhere only in the Souda (a 10th-century medieval Greek encyclopedia). It must resonate with those of us who have witnessed use of a similar racial slur in the American South.

The word κακοήθεια [kakoētheia], usually translated as “malice” or “malignity,” means a bad disposition that is ingrained into one’s habits or character. (And, as antiquity’s preeminent biographer, Plutarch was, if anything, a good judge of character.) The word κακοήθεια can involve deception, insincerity, slander and deliberate falsification of facts.[3] Plutarch even goes a step further when he portrays Herodotus as not just deceptive or disingenuous, but as a liar—not as the father of history, but as the father of lies. Plutarch states:

Hitherto no one has dared to expose him as a liar. Since his principal victims are the Boeotians and the Corinthians, though he spares no one, I think it is proper that I should now stand up for the cause of my ancestors and the cause of truth and show how dishonest this part of his work is; it would, of course, take many books if one wanted to describe all his other lies and fabrications.
(at 854f, trans. L. Pearson)

Scholars through the centuries have attempted to explain away Plutarch’s hostility towards Herodotus in a variety of ways. Perhaps it was a product of Plutarch’s youth, which could be dismissed as juvenalia.  Or perhaps it is spurious and should be attributed to a Pseudo-Plutarch, since such misnomers and confusions were especially common in late antiquity. None of these attempted explanations has prevailed, however.

If the essay is accepted as genuine and as written by the mature Plutarch, how might one explain the unusual hostility exhibited therein? Jackson P. Hershbell has given some possible explanations. One is that Plutarch was incensed by Herodotus’ negative portrayal of Boeotians, especially by his dismissive comments about the role of the Thebans at Thermopylae. “According to Plutarch, the Thebans did not accept the great King’s terms until Thermopylae was taken, and to emphasize Theban heroism Plutarch considers their achievement a μέγιστον καὶ κάλλιστον ἔργον quite in contrast to Herodotus who reports that the Thebans remained unwilling hostages of Leonidas.”[4] Having spent most of his life in and around Chaironea, Plutarch was loyal to his home region and sensitive to any real or perceived slights of his ancestors.

Another possible explanation is that Plutarch, as a priest of Apollo at Delphi, was offended by Herodotus’ treatment of the role of that oracle in the Persian Wars. Any hint of pro-Persian sentiment by the oracle would have been anathema to him, and he might have seen Herodotus as having portrayed the oracle as not sufficiently biased in favor of the Greeks. According to Hershbell, “Herodotus’ account suggests that the shrine was pro-Persian, and certainly gives no credit to the Delphic oracle for the Hellenic victory at Plataea,” whereas in Plutarch’s own account of Plataea, “it is the Delphic oracle who tells the Hellenes where the battle is to be fought, and what gods and heroes were to be propitiated in order to assure victory.”[5]

Whatever the true explanation, Plutarch’s essay “On the Malice of Herodotus” is a reminder (as if we needed one) that whenever a global, multicultural worldview challenges strongly-held nationalistic traditions and cultural values, the debate is likely to become impassioned.

Gregory Nagy, “Herodotus and the Logioi of the Persians,” in Short Writings Vol. 4, 2014, available on the CHS website

Wikipedia, s.v. “On the Malice of Herodotus,”  and s.v. “Herodotus”