In part 1 we looked at female captives, slaves, servants, and non-family members of the household as depicted in Homeric epic. In this post we look at their male counterparts.

We start with Eumaios, whose story provides an example of how a servant was brought into a household. Born on Syra, he was the son of Ktesios, who ruled the two communities of the island:

Now to this place there came some cunning traders from Phoenicia (for the Phoenicians are great mariners) in a ship which they had freighted with trinkets of all kinds. …

A servant woman led the young Eumaios from the house:

…till we reached the harbor, where the fast-running Phoenician ship was lying. [475] When they had got on board they sailed their ways over the sea, taking us with them …

Presently the winds and waves took the ship to Ithaca, where Laertes gave sundry of his chattels for me, and thus it was that ever I came to set eyes upon this country. 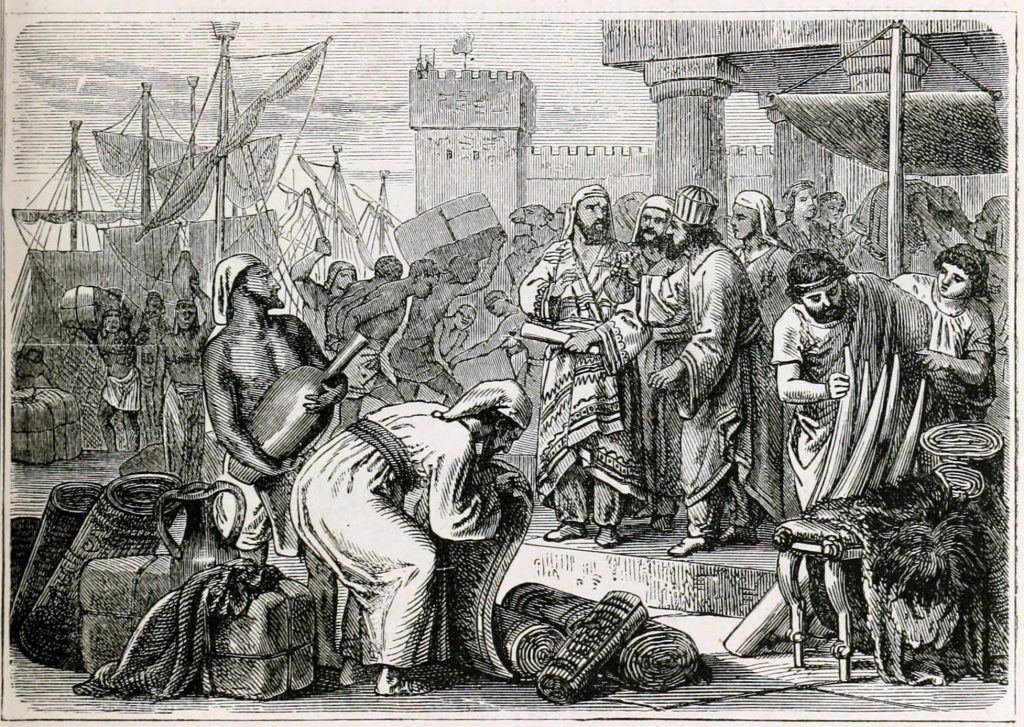 He was well treated as a youth in the household: he recounts how Odysseus’ mother was kind to him:

As long as she was still living, though she was always grieving, I used to like seeing her and asking her how she did, for she brought me up along with her daughter Ktimene of the light robes, the youngest of her children; [365] we were boy and girl together, and she made little difference between us. When, however, we both grew up, they sent Ktimene to Samē and received a splendid dowry for her. As for me, my mistress gave me a good khiton and cloak with a pair of sandals for my feet, [370] and sent me off into the country, but she was just as fond of me as ever.

He had built his house “without saying anything to Penelope or old Laertes” (Odyssey 14.5– 14) and bought his own servant:

Mesaulios brought them their bread; [450] the swineherd [subōtēs] had bought this man on his own account from among the Taphians during his master’s [anax] absence, and had paid for him with his own wealth without saying anything either to his mistress [despoina] or old Laertes.

From this we can see there was a thriving trade among the Phoenicians and Taphians: male servants seem more likely to have been taken this way than in war.

Odysseus, in the guise of a beggar, says he wishes to go to town to beg:

Then resourceful Odysseus said, “Sir, I do not want to stay here; a beggar [ptōkhos] can always do better in town than country, for anyone who likes can give him something. [20] I am too old to care about remaining here at the beck and call of a master [sēmantōr]. 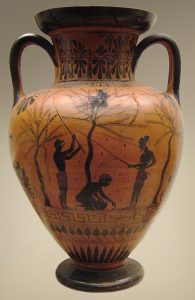 When he meets the suitors they challenge him about his lifestyle:

So among them Eurymachus, son of Polybus, began to speak, [350] jeering at Odysseus,… Then turning to Odysseus he said, “Stranger, will you work as a servant [thēteuō], if I send you to the moor and see that you have reliable pay [misthos]? Can you build a stone fence, or plant trees? [360] I will have you fed all the year round, and will find you in shoes and clothing. Will you go, then? Not you; for you have got into bad ways, and do not want to approach work [ergon]; you had rather fill your belly by going round the district [dēmos] begging [ptōssō].

This type of work is offered to someone who they think is unskilled. Perhaps of a higher status are these:

[380] And Eumaios answered, 381 “Antinoos! Though you are noble, you do not speak properly. 382 What man who is from somewhere else himself 383 will invite yet another guest-stranger [xenos], unless he [the xenos] is one of those who are workers of the district [dēmiourgoi], 384 such as a seer [mantis], or a healer [iatēr] of illnesses, or a carpenter [tektōn] who works on wood, [385] or even an inspired singer [aiodos] who can give delight with his singing? 386 For such men are apt to be invited anywhere in the world. 387 But one would not invite a beggar [ptōkhos]; such a man would feed on his host. You are always harder on Odysseus’ servants [dmōs, pl.] than any of the other suitors are, and above all on me, but I [390] do not care so long as godlike Telemachus and circumspect Penelope are alive and here.”

It seems they are not permanent members of the household but had skills that were valued.

Even gods could serve for hire.

[435] Meanwhile King Poseidon turned to Apollo saying, “Phoebus, why should we keep each other at arm’s length? it is not well, now that the others have begun fighting; it will be disgraceful to us if we return to Zeus’ bronze-floored mansion on Olympus without having fought each other; [440] therefore come on, you are the younger of the two, and I ought not to attack you, for I am older and have had more experience. Idiot, you have no sense, and forget how we two alone of all the gods fared hardly round about Ilion when we came from Zeus’ house and worked [thēteuō] for Laomedon a whole year [445] at a stated [rhētos] wage [misthos] and he gave us his orders. I built [demō] the Trojans the wall about their city, so wide and fair that it might be impregnable, while you, Phoebus, herded cattle for him in the dales of many-valleyed Ida. [450] When, however, the glad seasons [hōrai] brought round the time-limit [telos] for payment [misthos], mighty headstrong Laomedon robbed us of all our hire [misthos] and sent us off with nothing but abuse.

Some attendants, like heralds [kerukes] and therapontes, are only described in those terms and not with the other words for servants, slaves, or hirelings. The therapōn is a H24H Core Vocab term, glossed as “attendant, ritual substitute” and is discussed in Hour 6.[2] Outside the situation of war, the therapōn is also shown assisting with the preparation and serving of food and drink to guests (see, for example, Iliad 205ff). And heralds also have a ceremonial role[3]. Here is an example of the preparation for a feast:

Heralds [kerukes] and attendants [therapontes] were bustling about to wait upon them, [110] some mixing wine with water in the mixing-bowls, some cleaning down the tables with wet sponges and laying them out again, and some cutting up great quantities of meat.

One thing that emerges from our initial exploration of male servitude is to ask: what is the concept of freedom? So many of these in positions of service have had a turn of fortune: they were princes, for example, but after being captured or expelled they are in the service of another household. They may be well treated, and have different functions, but they do not have the right to their own property. They might not get wages, but they are fed and sheltered. Other attendants have a ceremonial function, and could not be described as slaves. There are also men who do not have a position in a household but who, unless they are reduced to wandering or begging, can be hired for specific tasks or for a fixed period of time—they might be free to go where they please but they have no security.

But even Achilles says that he would prefer a life of servitude than death:

‘Say not a word,’ he answered, ‘in death’s favor; [490] I would rather be a paid servant [thēteuō] in a poor man’s house and be above ground than king of kings among the dead.’

Please join us in discussion through the forum to share other passages, vocabulary, and examples from the Homeric epics relating to male servitude.

Here are a number of terms for male slaves or servants, and related concepts, taken both from the passages we quoted above, and based on other searches using online corpora. The glosses are summarized from definitions in LSJ and/or Autenrieth, on Perseus, or from Montanari, Franco The Brill Dictionary of Ancient Greek. Notes are our own.

aoidos “singer, bard” Autenrieth says “For the high estimation in which the ἀοιδός was held, see Od. 8.479 ff.”

dēmiourgos “one who works for the people, a skilled workman, handicraftsman”

sēmantōr “one who gives the sign, commander, leader, then driver, herder, of horses, cattle”

thēteuō “to be a day-laborer, to work for hire”

[3] “The heralds convoked the popular assembly, kept order at trials, bore as sign of their office a staff, which they handed over to him who had the right to speak. They served also as messengers of the chiefs and as their assistants in sacrifice.”
Autenrieth, Georg. 1891. A Homeric Dictionary for Schools and Colleges. New York. Harper and Brothers.  Entry for κῆρυξ.

Phoenician Merchants and Traders. From The Illustrated History of the World for the English People. [1881?–1884?]. New York. Ward, Lock. Public domain, via Wikimedia Commons

Note: Images have been selected from pictures that are freely available with open source or Creative Commons licenses or from photographs sent in by community members for the purpose. The images in this post are intended to suggest the subject, rather than illustrate exactly—as such, they may be from other periods, subjects, or cultures. Attributions are based where possible by those shown by museums, or on Wikimedia Commons, at the time of publication on this website. Texts and images accessed June 2018.