Following the heroic age of the Myceneans is the silence of the Greek Dark Ages. In the proto-Geometric period (c1150–c950 BCE), the pre-Greek tribes make war, then consolidate and start forming city states. The Doric tribes mix with the Attics of Athens, and art focuses on motifs that express “order”: concentration and intensity. There is no expression that refers to myth or religion. The Minoan and Mycenaean palaces and civilization are lost and so are the writing systems Linear A and B. The systems of communication allowing trade, wealth, art and culture have vanished.

In the eighth century this period of introversion comes to an end. The Dark Ages flow over into the mid-Geometric period. Potters start to enrich the decorations of the vases with forms of people, animals and—in the so-called Orientalizing style—with lions, panthers, rosettes, palmettes and lotus flowers. Lastly, in the Late Geometric Period, the artists start to communicate with the viewer by adding narrative content into the decorations. The Late Geometric period is the start-up of the pre-Classic Greek history and it coincides with the formative stage of Homeric poetry.

The decorative theme of the meander is at the core of it—everything that figures is reduced to this essential ingredient[1], [2].

Around the mid-eighth century BCE the entrance of the Kerameikos cemetery in Athens is flanked by two pylons. Craters marked the places of males, amphorae those of females. They were painted in a Late Geometric style, many of the by the same artist: the so-called Dipylon Master (active 770–750 BCE, Athens)[3].

Fragments of a beautiful kratēr made by the Dipylon Master are shown in Figures 1 and 2. The vase, a grave-marker and one of the high points of the Geometric period, is decorated with scenes of a funerary event; a corpse’s procession, named ekphorae, showing the deceased on a bier flanked by mourners, passing silently through the streets of Athens.

Fore and aft of the bier are chariots, horses, and warriors carrying the Dipylon type of shields. The section beneath the handles represents a warship, suggesting that the deceased was a naucraros: a part of the Athenian maritime nobility[4]. Each human in the decoration consists of a triangle for a torso, the two long sides of which extend into arms which are raised in lament. The hands close above the heads, thus forming a second, larger, triangle. The faces point in the direction of the procession. The waist lines are slender; the legs are curved sections, providing a rather athletic profile.

The patterned veil that has been put over the deceased is painted above him, rather than over him, so all parts can be depicted, and the dead man is shown as if viewed directly from above. For the same reason, the horses, standing beside each other, have their legs put in the same plane. The artist used dimensions, aspect, and relative placement of the various elements rather on basis of essence than in an attempt for realistic representation[5]. 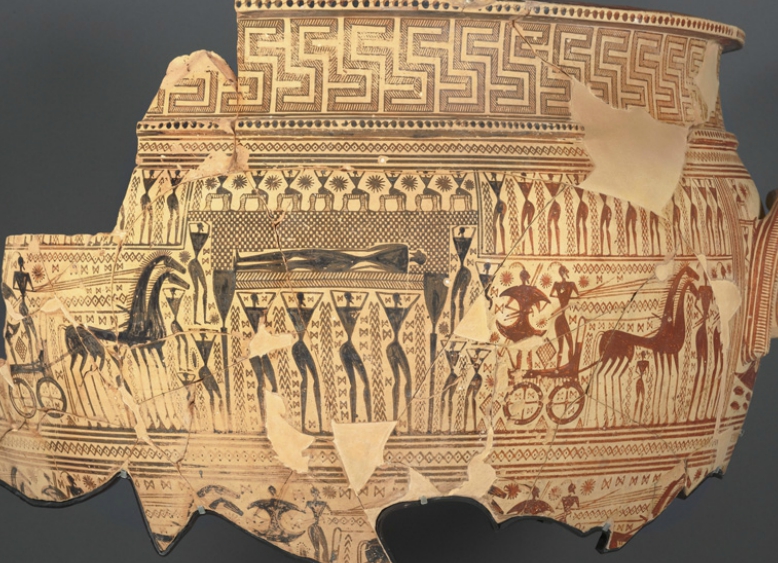 Figure 1: Dipylon vase: transport of the mortal remains to the place of burial. 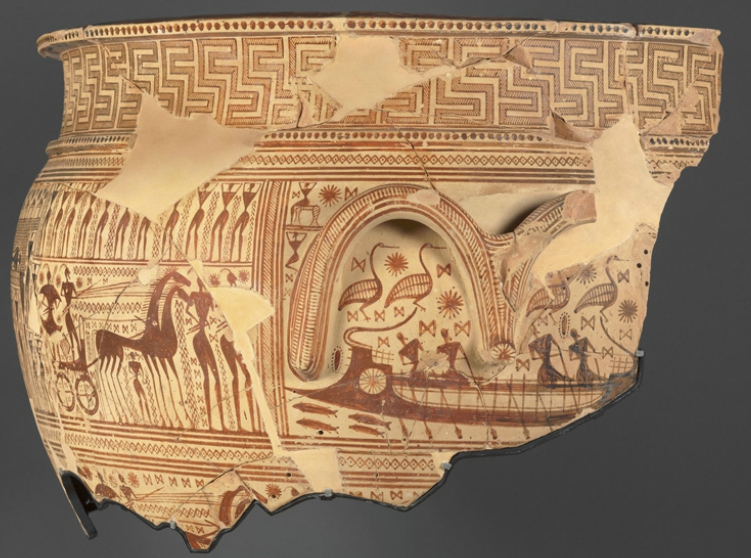 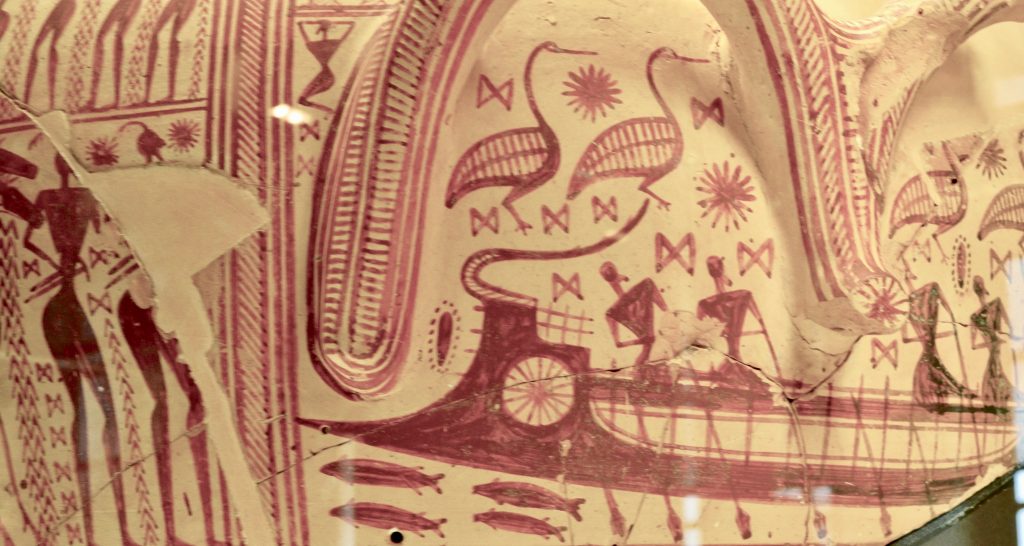 The narrative that is decorated on the vase is split-out over various compartmentalized sections. The section below the handles shows an elegant vessel with a slender hull, curved keel contour and a large stem with horn. The athletic oarsmen framed in this section, at which we look as if it were through a window, keep the ship at speed. In the image, however, they are arrested in the stop-motion picture that tells the narrative of the depicted event.

The ship itself is protected by long-necked water birds at the bow and stern and garlanded by the handles of the vase. The shape of the bird-heads, facing in the direction of the procession, which is toward the stern of the ship, regenerates in the curved contour of the stem post. This gives the impression of the ship being “steep-horned” [orthokráraon]. The cutwater [steira] is reduced to its essential lines and curves slightly upward in a continuation of the lines of the keel contour. The wheel in the side of the bow seems to be a decoration; or is there an essential meaning that we do not know of? The remaining spaces are filled with talismanic flowers and butterflies[6].

For the interpretation of the ships depicted on the Geometric vases one wonders whether the ships are fitted with a deck, fitted with a fighting platform that runs from fore to aft, or even fitted with an upper level and a lower level of rowers. Let’s first look at some guidance from the Homeric poetry, which in this same 8th century period was taking on its present shape.

From this textual source we know that the dual benched ships of Odysseus were single decked, with a raised deck at the stern and in the forebody. The open ships of Homer were áphraktos (undefended, not fenced). The name áphraktos may be at the origin of our word “frigate”. The deck of the ships was a deck in the full sense, adding safety and seaworthiness to the design.

An ancient ship having one line of oarsmen on the portside and one line on the starboard was called dikrotos (compare monokrotos; single-banked) or, synonymously “diērēs”: a two-banked galley.

Furthermore, the ships were classified against the number of oarsmen that they carried: a thirty-oared ship was a triākontoros and a fifty-oared long ship a pentekontoros. The latter, the pentekontoros became the standard Greek war-vessel, paving the way for the Roman biremis and triremis, which were very well defined multi-level ships types. The name diērēs suggests something that was never there: a standard class of ancient Greek two-decked ships.[7]

Lastly, we know that the ancient ship on 6th century vases—depicted in more realistic detail—were covered by a single main deck only. I would therefore argue that the raised deck, as shown on the ships on the Dipylon vases, is a geometric technique in which the relative placement of the deck is based rather on a wish to depict the oarsmen in detail—their triangular bodies shown from the front—than on the need for a realistic representation of the event.

A side note should be that history is written through the acts of lords; lords who lived in cities. Most people, however, lived outside the cities. They were barberoi; people who spoke a language that, in the Greek ear, sounded like “bar-bar”. They paid no tax, did not conduct involuntary labor and they could move freely through the country.[1] The term “Dark Ages” is therefore an expression that is mainly used by the people that are interested in the acts of lords: the common man continued his business as usual.[2]

Notes on the use of the aft deck

Note on the use of the foredeck

Notes on the application of a curved keel and bow line, allowing the ship to be easily beached

Moore, Mary B. 2000, Ships on a ‘Wine-Dark Sea in the Age of Homer, Metropolitan Museum Journal v35, New York

Scott, James C. 2017. Against the Grain. A Deep History of the Earliest States. Yale University Press.