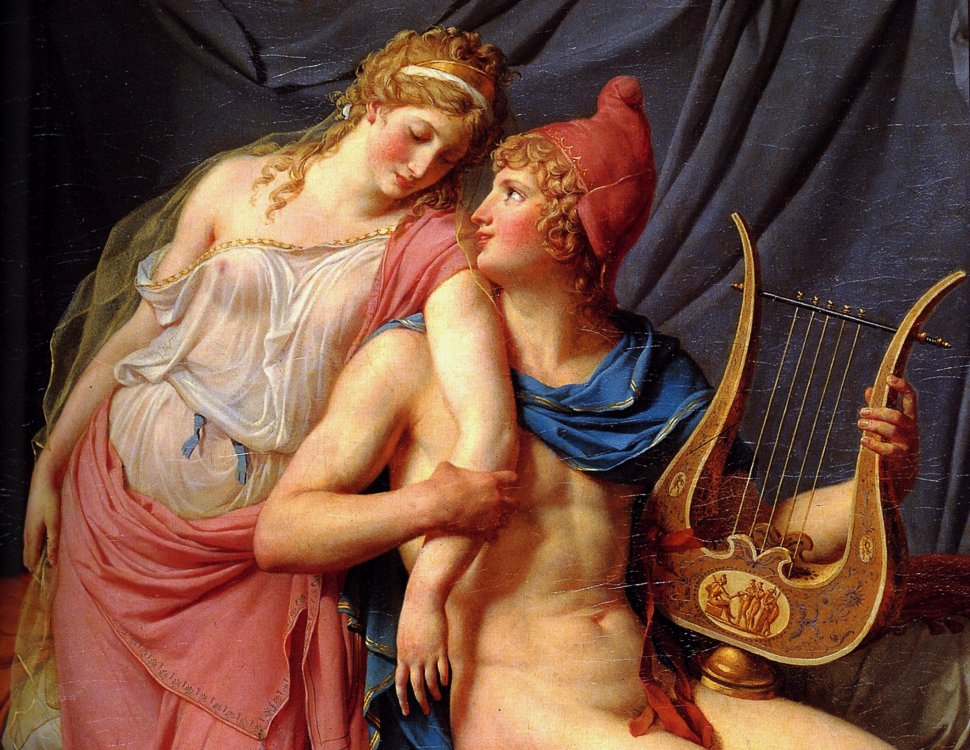 When we first meet Helen in the Iliad the goddess Iris has led her to the Scaean Gates of Troy, where she looks out onto the battlefield. There she laments the actions that brought her to Troy and longs for home:

“…would that I had chosen death rather than to have come here with your son, far from my bridal chamber, my friends, my darling daughter, and all the companions of my girlhood. But it was not to be, and my lot is one of tears and sorrow.”
(Iliad 3.173–175, Sourcebook)

A truce is held between the two sides, with the champion of each army to duel. The two warriors are the two husbands of Helen: Menelaos and Paris. The winner of this fight will end the war in favor of his side and claim Helen, or so the solemn promises made by both sides say. But when the duel goes against Paris, Aphrodite intervenes and whisks him away to safety. The promises go up in smoke.

Aphrodite then intervenes with Helen. As we will see, Helen is always perceptive and she sees through the disguise of a spinning-woman. In a remarkable exchange, the self-loathing Helen (“my hateful self”, 3.404) berates the goddess and tells her to:

“Go sit with Alexandros yourself;
henceforth be a goddess no longer;
never let your feet carry you back to Olympus;
worry about him and look after him
till he make you’re his wife, or,
for the matter of that, his slave…”
(Iliad 3.405–409, Sourcebook) 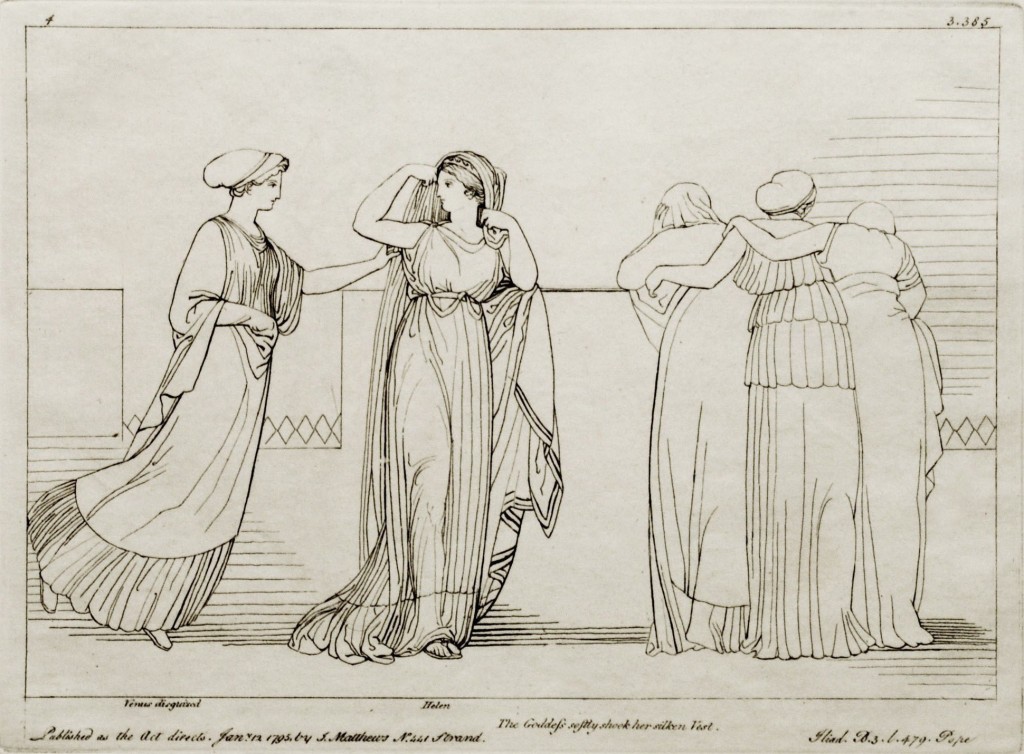 Aphrodite the shining was very angry, and said,
“Bold hussy, do not provoke me; if you do,
I shall leave you to your fate
And hate you as much as I have loved you.
I will stir up fierce hatred between Trojans and Achaeans,
And you shall come to a bad end.”
Then Helen daughter of Zeus was frightened.
(Iliad 3.414–418, Sourcebook)

Helen submits to the order of the goddess, making us wonder how much choice Helen has not only in this but also her original voyage to Troy—especially if we consider the story of the Judgment of Paris and how Aphrodite awards Helen as the prize. How did Aphrodite influence Helen initially? Is it “immortal madness” (from Fitzgerald’s 1975 translation of the Iliad, 3:482), a derangement [atē] along similar lines to that claimed by Agamemnon for his dispute with Achilles? 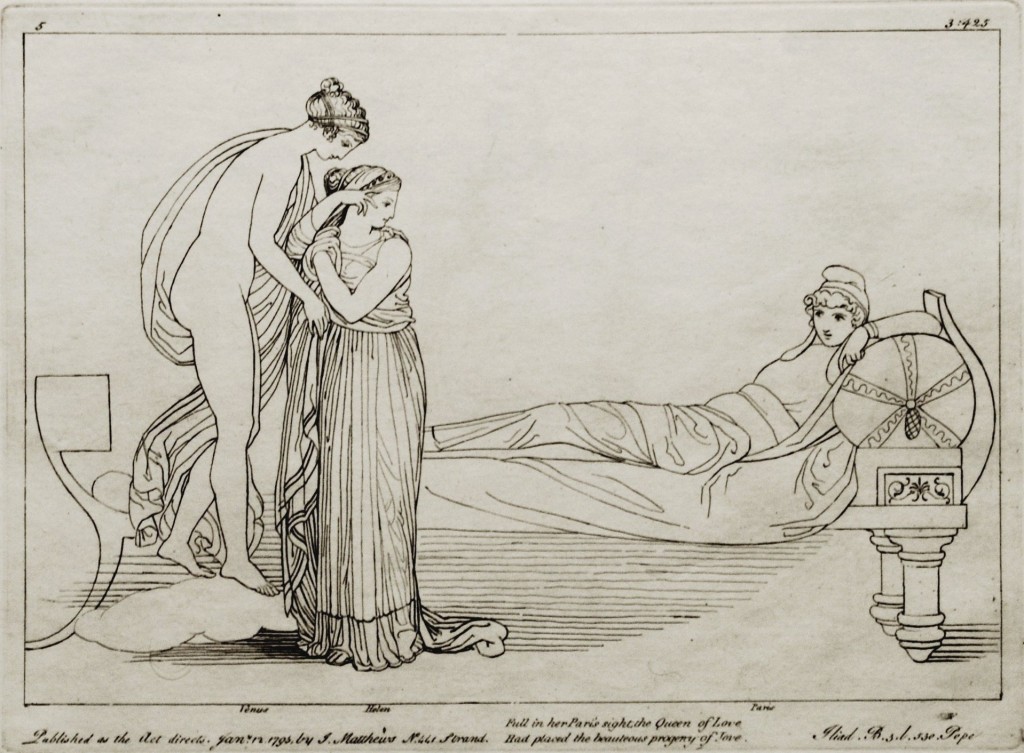 Helen also makes an appearance in the Odyssey, long after the fall of Troy and in her role of Queen of Sparta, back as wife of Menelaos. But has this been a successful return to her original station, a successful nostos? Let’s look further into the visit by Telemachus who has come to Sparta in search of information about his father, Odysseus, in his hope of his return.

The visit begins well, with Telemachus and Peisistratos being given refreshments, in accordance with Menelaos being a good host (in line with xeniā). But before Menelaos inquires about his guests, the conversation goes downhill. Telemachus comments on the wealth in the hall, with Menelaos miserably commenting:

“But while I was travelling and getting great riches among these people, my brother was secretly and shockingly murdered through perfidy of his wicked wife, so that I have no pleasure in being lord of all this wealth… Would that I had only a third of what I now have so that I had stayed at home, and all those were living who perished on the plain of Troy.”
(Odyssey 4.90–99, Sourcebook)

Menelaos doesn’t mention Helen, yet the cause of his misery (which includes the loss of his great friend Odysseus) involves his wife. Perhaps he indirectly points to this, through mention of his wife’s sister, the queen he sees as behind the murder of his brother, Agamemnon, and his unsuccessful nostos.

Helen then enters the hall and the discussion, compared not with Aphrodite but instead chaste Artemis. This sounds promising of a change. Her station as a powerful queen and dutiful wife is emphasized by the quality of her chair and weaving equipment. Helen’s quick perception leads her to quickly identify who Telemachus is, and consistent with her behavior in the Iliad, describes herself as a shameless whore fought for by the Achaeans. But has there been a change in Helen?

The conversation continues downhill, with the group breaking into tears when they think of Odysseus and his delayed return. Here we see Helen take action to correct:

She put a drug into the wine from which they drank. It [= the drug] was against penthos and against anger. It make one forget all bad things.
(Odyssey 4.220–221, Sourcebook)

Fitzgerald gives a slightly different translation, with use of the word magic:

Into the mixing bowl from which they drank their wine
she slipped a drug, heart’s ease, dissolving anger,
magic to make us all forget our pains…
(Odyssey 4:244, Fitzgerald)

Doesn’t this sound similar to other strong women in the Odyssey, like Circe or Kalypsō, possessed of dangerous sexual allure and mysterious knowledge, yet ultimately subject to male command? We see a mysterious, unearthly ability further when in Odyssey 15.169–171 Helen interprets the omen when Telemachus is almost ready to leave Sparta and head home, and interestingly, once again she out steps her husband (“Warlike Menelaos was thinking, what would be the most proper answer for him to make, but Helen was too quick for him”) just as when she met Telemachus. 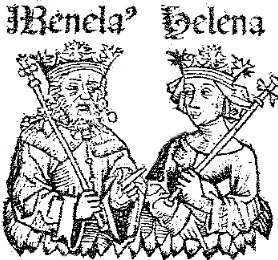 Returning to the conversation, we move to something unusual—Helen and Menelaos each tell a story featuring Helen, but these stories seem to be at odds. How can this be, given the apparent domestic bliss we have seen so far?

Helen tells how she recognized Odysseus while he was in disguise in Troy during the war. We initially feel this could be for Telemachus’ benefit, to hear about his father. This story casts Helen in a favorable light, that she chafes against being in Troy and yearns to return home. This would be consistent with her comments in the Iliad, here grieving in her tale “too late for the madness Aphrodite sent me, luring me there, far from my dear land” (Fitzgerald, 4:295). So has she then corrected from the madness, from the atē?

Maybe not. Menelaos first congratulates her on the story (also ignoring Helen’s compliment of being “a man who lacked neither for brains nor beauty” at 4.264), and then tells his own tale where Helen shows another amazing power, the ability to mimic voices. She walks around the Trojan Horse, and calls out in the voices of the wives of the Greek warriors. Why does Menelaos tell this story, where instead of helping the Greeks as in her story, Helen tries to do the opposite? Is it a further indication that their nostos is not as happy as it first looks? It is an improvement over that of Agamemnon. Does this direction of improved return hint towards that of Odysseus, that his (with Penelope, the cousin of Helen) is going to be the better example, a successful nostos?

And why does Helen give these “cunning drugs”: is it to stop the melancholy, to prepare for her tale as it dulls the emotions and maybe increasing susceptibility, or both? She is speaking to the younger generation, without direct experience at Troy, so this could be a chance to “set the record straight”. Helen could be seen as the cause of the sorrow discussed earlier, but she positions herself as also a victim, that she is not the starting cause of Odysseus’ apparent loss but that she actually helped (or at least did not hinder him). Is she a victim? Aphrodite’s behavior in the Iliad suggests so.

In short, my thoughts lean towards Helen being a reluctant tool of the gods. Her homecoming is on the surface successful, but there is marital stress where her husband still holds her responsible for losses incurred by the Trojan War. But I believe that Homeric epic has deliberately left matters ambiguous, to our great benefit as readers and listeners to this story. We can sift through the “clues” left in the stories, and weave our own tale. What are your thoughts on Helen and her role in the Trojan War?

Dr. Timothy Banks grew up in New Zealand, and like most children there plotted his great escape, otherwise known as the OE (“overseas experience”).  This is when young adults go overseas, work, and then bring back new experiences to the country.  In Tim’s case his OE has gone on for twenty years with no sign of “nostos” yet.  He puts this down to a severe lack of map-reading skills.

Tim trained as a physicist, working on a variety of questions such as how the Earth’s magnetic field changes direction, where all the “missing mass” of the universe is (he failed to find it), mapping magnetic activity on Sun-like stars, finding planets around other stars, and where he put his house keys this morning.  For all these sins and presumably more, Tim has been working in advanced analytics for the last twenty years and now heads a research unit for Nielsen, a marketing intelligence company, in East Asia. His role includes university outreach, leading to joint research projects with the major Singapore universities, where he lives. As a child he enjoyed learning about cultures, and in particular the ‘ancient’ ones around the Mediterranean, so was delighted to find “The Ancient Greek Hero” online which has re-sparked his interest in these times.