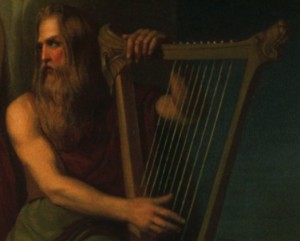 As some of you know, Jack Vaughan and I have been reading the Old English poem Beowulf together, using the same slow reading techniques and discussions that we have been used to in HeroesX and Hour 25 [= Kosmos Society].

Recently we were looking at a passage in which a poet tells a story, and of course it brought to mind the bards and micro-narratives within Homeric epic.

At the same time some of us have been reading Richard Martin’s The Language of Heroes: Speech and Performance in the Iliad (available on the CHS website)[1] for the Book Club. Here is one of the things he says in Chapter 1:

Where can we turn, within Homer, to find performance? Not, I believe, to the poets. Most of what can be said about the significance of Demodokos and Phemios, the so-called bards, and Odysseus, bard manqué, has been said by now, some of it thoughtfully. This path has been a useful dead end; it has been worth it if only because we have learned to reread the Odyssey as a narratological labyrinth. I {9|10} cannot see that it has had any impact on Iliad studies. Ultimately, the evidence is too thin for us to draw conclusions about Homer from his depictions of bards.

I realize that written Old English poetry is much later in date than the written version of Homeric poetry, but if we are to take it as another example of work that arose from an oral tradition, then it is interesting to look at this passage for comparison, so I thought I would share it here.

The context is that the locals have been subject to attacks in their hall by a dreadful monster, Grendel. Our hero, Beowulf, has arrived with a group of followers, and has single-handedly wrestled with Grendel and killed him. Now come the celebrations: horse races, and recitation:

From time to time one of the king’s retainers, a man filled with poetic eloquence who remembered lays, who could call to mind a multitude of all kinds of ancient traditions, improvised new recitations correctly linked in metre: the man afterwards began skilfully to treat of Bēowulf’s exploit and effectively to recite an aptly made tale, varying his words.
(lines 867–874, tr. C.L. Wrenn)[2]

The bard then proceeds to tell the story of Sigemund who killed a dragon single-handedly (a story that is related to that told in detail in the Nibelungenlied and Vǫlsunga Saga), and of Heremod who was betrayed and exiled—the outline of the stories is given in a few lines.

Even if you are not familiar with Beowulf, what do you make of this passage and how it fits into the outer narrative?

What similarities and differences do you see in the way this performance is depicted, compared to how the bards are depicted in Homeric epic?

And, thinking also about Singer of Tales, how does this depiction of the singer recomposing existing stories in new ways fit with the concept of composition-in-performance?

Please join in the discussion in the forum.

Detail from Aldunn and Bragi, by Nils Blommér public domain, via Wikimedia Commons