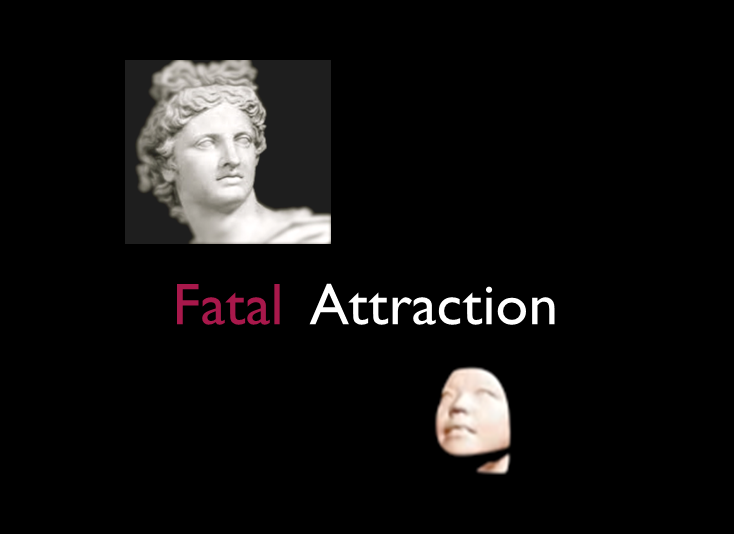 Fatal Attraction in that Michael Douglas-Glenn Close movie I understand. But fatal attraction in the Iliad? Frankly, I’ve found the idea hard to grasp, and some of the explanations in The Ancient Greek Hero in 24 Hours[1] prompt me to ask some additional questions.

In this post, I’m going to discuss these questions with a special focus on the last one, arguing that fatal attraction is not as improbable as it might seem. I’ll be offering contemporary examples, including a personal account of “fatal attraction” by an eminent writer. Please feel free to to post your comments.

Fatal Attraction: What is it?

In the midst of combat, an over-achieving warrior might confront a divine antagonist. If so, and if the warrior challenges the god, the narrator equates the mortal with the divinity, describing the mortal as “equal to a superhuman force.”  Those words signify that the climax of this man-to-god confrontation has arrived. Three things happen instantaneously: the warrior’s identity merges with the god’s. The hero wants to kill the god.  He also has come “face to face” with possible death at the hands of the god. However, the warrior also feels attracted to his divine antagonist. That’s where the proceedings take a “sinister twist.” As Professor Nagy says, “the attraction is not recognized as fatal until it is too late.”

What kind of attraction is it?

Fraternal? Admiring? Sexual? In The Ancient Greek Hero in 24 Hours (hereafter H24H), Professor Nagy doesn’t say. But he does mention that at the climactic moment, warriors tend to find the corresponding god either beautiful or sexy.

How do we know this attraction takes place?

Part of Nagy’s answer is the “logic of myth.” In Hour 5 of H24H, he explains how that works. To summarize–he says equating mortals with gods happens in lyric poetry. So does fusion of identities and fatal attraction. He also reminds us that lyric and epic poetry are are linked. For Apollo, the controller of all forms of poetry and song, epic and lyric are “undifferentiated, just as the kleos aphthiton of Achilles as warrior in epic is undifferentiated from the kleos aphthiton of Hector and Andromache as bridegroom and bride in lyric.” (H24H 5§115)  So if fatal attraction can occur in lyric poems, it can also occur in epic poetry.

Professor Nagy says an example of fatal attraction takes place at the end of Patroklos’ last hurrah as he is cut down by Apollo.

|698 The sons of the Achaeans could now have taken Troy |699 by the hands of Patroklos, for he was raging in all directions with his spear, |700 if Phoebus Apollo had not made his stand at the well-built wall, |701standing there and thinking destructive thoughts against him [= Patroklos], since he [= Apollo] was supporting the Trojans. |702 Three times did he [= Patroklos] reach the base of the high wall, |703 that is what Patroklos did, and three times was he beaten back by Apollo, |704 who struck with his own immortal hands the luminous shield [of Patroklos]. |705 But when he [= Patroklos] rushed ahead for yet a fourth time, equal [īsos] to a superhuman force [daimōn ], |706 he [= Apollo] shouted to him with a terrifying voice and spoke winged words: |707 “Draw back, Patroklos, you who are descended from the gods in the sky. It is not your destiny [aisa] |708 to destroy with your spear the city of the proud Trojans, |709 nor will it be the destiny of Achilles, who is a far better man than you are.” |710 That is what he [= Apollo] said. On hearing this, Patroklos drew quite a way back, |711 thus avoiding the anger [mēnis] of Apollo who shoots from afar.
(Iliad XVI 698–711)

Frankly, I see no evidence of attraction in this passage, but professor Nagy does. “Here then, is the moment of fatal attraction.” (H24H 5§7)

How could a person feel sexually attracted to a god who is about to annihilate him?

The professor says that whatever it is, it’s what makes us human.[2]

To build on that observation–one thing that makes us human is our often inconsistent nature. For example, some of us are quite capable of holding contradictory ideas and agreeing with them both. In the book 1984, author George Orwell calls this “doublethink.”

We are also capable of engaging in so-called friendly rivalries, like one in which two office mates vie for promotion. Another example is love-hate relationships.

In a more violent setting, people who are hostages can bond with their life-threatening captors. This is called Stockholm Syndrome. Symptoms include “defending and identifying with [their captor].”  The hostage can be seen to experience “traumatic bonding” which involves “strong emotional ties.” (Note the connection between trauma and bonding). So people can be attracted to someone who has the power to kill them.[3]

Professor Nagy mentions that people have a desire to be close to their god. To achieve this, some devotees induce an altered state of consciousness and go on to experience ecstasy. It is said to have happened to Thomas Aquinas, St. Teresa of Avila, and countless others. When that happens identity dissolves into blissful “oneness.”

Let’s turn to Professor Nagy’s example of fatal attraction. It’s felt by Patroklos during the conflict with Apollo. In my opinion, Patroklos has transcended into an altered state of mind.

It all begins on the morning of the hero’s final day when he undergoes a series of extreme emotions. First, he feels severe distress over the slaughter of the Achaeans by the boats. Later, he uncharacteristically rebukes Achilles for being unwilling to rejoin the war.  Later in the day, Patroklos’ emotions intensify even more. After he has donned Achilles’ armor, Patroklos is likened to a bloodthirsty wolf. Further altering Patroklos’ consciousness, Zeus instills in him enough courage to fight like a superhuman force.

He is so aroused with such Ares-like martial fury that he single-handedly slaughters 53 Trojans, while screaming, “raging in all directions” and generally behaving like a berserk–in other words, a warrior with altered consciousness. Under these conditions Patroklos might believe  his identity has fused with Apollo’s and that he is attracted to the god.

You could look at the phenomenon as a true mystical experience similar to that found in lyric poetry, climaxing in an epiphany, euphoria and, soon, death. Or you could see it as battle trauma, whose symptoms include: an altered state of consciousness which causes unreality, loss of identity, delusions and hallucinations.[4]

Now here is a more recent example of a soldier who was “fatally attracted” to an other-wordly force. Historian William Manchester experienced something like this during battle as a young soldier in the Battle of Okinawa in World War 2. In the summary of this encounter that follows you’ll notice some  parallels to Patroklos’ experience.

In his memoir, Goodbye Darkness Manchester describes how his 12-man squad has just been wiped out by an exploding mortar. He survives because seconds before, he had stumbled into a nearby crater and avoided the blast. He remains there for cover and falls asleep. After nightfall Manchester awakens and the moment of fatal attraction occurs. The young soldier finds himself face to face with what he calls, the Whore of Death. She is reclining suggestively near the young soldier, who is both repulsed and sexually aroused. The Whore of Death offers him sex…but only after he single-handedly charges a nearby enemy position. Manchester recognizes this as an invitation to certain death, and declines. The “whore” vanishes and the aroused Manchester sexually relieves himself.

The fatal attraction was hallucinatory, but not its macabre eroticism. Manchester’s consciousness was in an altered state. Some have suggested the apparition was the result of the trauma of losing his companions, just as others have suggested that Patroklos also suffered from battle trauma and an altered mind state.

Now, I’d appreciate your comments.  I’d also appreciate your thoughts on Professor Nagy’s argument based on the crossover of fatal attraction between lyric and epic song.

5§125 A question remains: what is it, then, that attracts the hero to the god who will cause his death? I find no direct answer to this question in the passages that we have been reading during this hour, but I will attempt at least to offer this distillation of an indirect answer: whatever it is in us that makes us human makes us irresistibly attracted to the divine, even at the risk of mortal danger.

I suspect he is using a device similar to a probe. Marshall McLuhan the late communication scholar (The Medium is the Message) often used probes.

“The medium I employ is the probe…That is, I tend to use phrases, I tend to use observations that tease people, that squeeze them, that pushing at them, that disturb them…because I’m really exploring situations. I’m not trying to deliver a complete set of observations about anything.”
Marshall McLuhan Speaks Special Collection: My statements as probes

[4] The idea of exploring altered state of consciousness was inspired by knowledge of the work of Dr. Jonathan Shay. He wrote Achilles in Vietnam, and treats war veterans for battle trauma.

Myrmidon is an Iliad addict, a big fan of Hour 25, and is currently working as the barista at the Friday Café.