Under Discussion: The song of Daskalogiannis 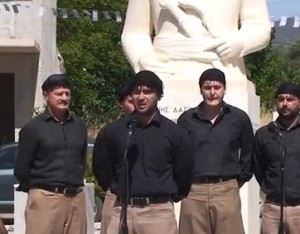 I had heard by chance the song of Daskalogiannis. My son Andreas is learning Cretan dances and I discovered that the dance Pentozali which has its roots in the Ancient Pyrrhic dance like the dance Serra of the Pontiac Greeks, was first danced by Daskalogiannis and his men before the revolt of 1770. Daskalogiannis invited a famous traditional violin player to teach his men a dance for the πέμπτο ζάλο, the fifth jump (Pentozali) which was the secret name for the fifth revolt of the Cretans against the Ottoman Empire.

Daskalogiannis was skinned alive in the end (1771) and the Sfakia region destroyed, but he became a legend thanks to Cretan song culture. Among the songs sung about him was one consisted of 1034 verses in its first version by one of his men called Barba(uncle)-Patzelios. He was an illiterate poor cheese maker. The poem was written down by a friend who knew how to write, because he was the son of a priest. Different versions of this initial poem can be found of different lengths as the poem kept changing by repetition. I think that this poem is a proof of what illiterate people of a song culture can achieve.

You can see more here in the Oral Poetics forum.

Euthymia Kalogera is a G.P. in the Health Center of Lygourio (Ancient Asklepeio), a small town (or a big village) located near the Ancient Theater of Epidaurus. She is interested in oral poetics because of her granny Tzanio, who introduced her to the world of Greek traditional folk poetry.