The theōriā and the Ship of Theseus

During our study at HeroesX, I was thrilled by the Hour 23 discussion about the sacred journey [theōriā], the never ending objective of Socrates to enter into dialogue with anyone he encounters.

The first text is from the beginning of Plato’s Phaedo, as taken from the Hour 23 of The Ancient Greek Hero in 24 Hours:

Phaedo
It was a matter of chance [tukhē], Echecrates, that things happened that way for him. The reason was that the stern of the ship that the Athenians send to Delos happened to be garlanded [stephein] on the day before the trial [dikē].
Echecrates
What is this ship?
Phaedo
This is the ship in which, as the Athenians say, Theseus went to Crete when he took with him those famous two-times-seven young people. He saved [sōzein] them and he too was saved . And they were said to have vowed to Apollo at that time, that if they were saved they would make an annual sacred journey [theōriā] to Delos. And even now, ever since that time, year after year, they send the ship to the god. So, every time they begin the sacred journey [theōriā], they have a custom [nomos] at this time of the year to purify [kathareuein] the city and to refrain from publicly executing anybody before the ship goes to Delos and then comes back from there. And sometimes this takes a long time, whenever the winds happen to detain them. And the beginning of the sacred journey [theōriā] is when the priest of Apollo garlands [stephein] the stern of the ship. This happened, as I say, on the day before the trial [dikē]. And this was the reason why Socrates spent a long time in prison between the time of his trial [dikē] and the time of his death.
(Plato, Phaedo 58a–58c, part of H24H Hour 23 Text C)

Next I would like to refer you to one of the images on the François krater, or wine-mixing bowl (Collection Florence, Museo Archeologico Nazionale), dated ca. 570 BCE, which may give us an idea of what the contemporary 5th century BCE ship of Theseus looked like. The ship is most probably a thirty-oared longship, or triākontoros, and on the image we see it landing on the beach, stern-first.

The museum’s catalogue generally describes the ship as follows:

The sternpost of the ship is in the shape of two swan’s heads, facing forward. The prow (not shown) is a boar’s head. The mast has been lowered and the crew is standing to debark; they talk excitedly among themselves, one throws his hands in the air in praise, another has jumped overboard and swims to the shore; one, labeled Phaidimos, has debarked and joins the Athenian youths and maidens on land. The helmsman, with two steering oars, turns around to face land and raises his arm in excitement. Most of the crew wear mantles and petasoi. To the right, a line of seven youths and seven maidens dancing the Crane Dance (Geranos). The youths wear mantles with various borders; the maidens, peploi with different decorations. The dancers are all labeled…. At the right side of the dance is Theseus, wearing a long chiton decorated with chariots and other figures and playing a kithara. He faces Ariadne at the far right, who holds a wreath and a ball of thread, with which Theseus had found his way out of the Labyrinth.

The earliest image of this event may be portrayed in the Miniature Frieze, known as the “Thera Flotilla Fresco” (Late Bronze Age, Late Minoan I Period, The West House, Room 5, South Wall 3.90 x 0.43 meters, Santorini, Greece). It was buried by volcanic ash during the Theran eruption, dated around 1627 BCE and was discovered in 1972 by the Greek archaeologist Spyridon Marinatos:

The image on the south wall shows a fleet of seven ships sailing toward the “home port,” that is, toward the same place from which it had departed. The theoric ship in this image is the small boat with mast and sail, steered by two helmsmen. Located at the stern of each ship is a structure that looks like a cabin, with a male figure seated inside each one. 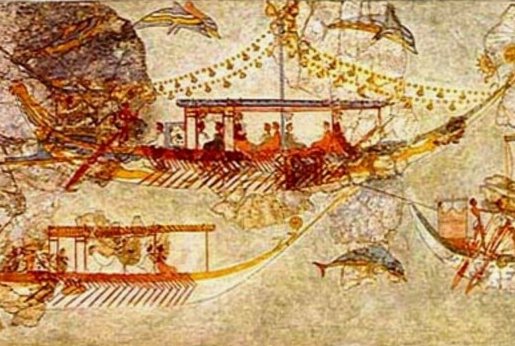 The analysis in Hour 23 describes how wall paintings in Room 4, situated to the south of Room 5, show a variety of close-up pictures of the decorations (semi-circular garlands of flowers) that are attached to the “cabins” located at the sterns of the seven large ships. What is being represented in both paintings, is argued, is a prototype of a theōriā in the sense of a ‘sacred journey’ that leads to a mystical vision. And our view of that vision is framed by the two semi-circular garlands through which the viewer looks at the scene—a beautiful perspective.

Furthermore, Plutarch, in his Life of Theseus, mentions that the ship which sailed every year on this ritualized journey to Delos and back, was believed to be the ship on which Theseus had sailed to Delos together with the rest of the young Athenians who had been saved from being sacrificed to the Minotaur:

The ship wherein Theseus and the youth of Athens returned from Crete had thirty oars, and was preserved by the Athenians down even to the time of Demetrius Phalereus, for they took away the old planks as they decayed, putting in new and stronger timber in their place, in so much that this ship became a standing example among the philosophers, for the logical question of things that grow; one side holding that the ship remained the same, and the other contending that it was not the same.

The oldest image of the theoric ship, shows us something that looks like a pharaonic river-ship: the youngest image shows us a contemporary longship, a triākontoros, which clearly is not the same ship physically, but theoretically it is.

This post has been extracted from part of the discussion on theōriā in the Forum. You might also be interested in the discussion on Ancient Greek Ships with Homeric vocabulary. Members are welcome to join the conversation.