We have had a discussion about the parts of armor and clothing, which did include some of the words for weapons, and Helene Emeriaud shared a gallery of images related to the subject, so now I would like to focus on the passages that describe the weapons themselves in more detail. In particular, I am interested in the passages where the weapons almost have a fame of their own, a micro-narrative which perhaps gives their history, or maybe where they almost seem to have a mind of their own, as if they were animate.

Here is a description of Hector, carrying his spear when he enters the house of Alexandros:

καλά, τά ῥ᾽ αὐτὸς ἔτευξε σὺν ἀνδράσιν οἳ τότ᾽ ἄριστοι
, which he himself had prepared with the men who then were the best

There are several things to note in this passage. One is that there is a lot of alliteration. That flags to me that the passage is more than just a filler description.

Second, the way the spear is described as being mounted with a bronze tip reminds me of how Hector is also marked here and in the rest of Scroll 6 in particular with a focus on his bronze helmet; it is as if the spear itself is matching his description. There is an epithet describing Hector which recurs several times in the surrounding passages: κορυθαίολος [koruthaiolos], ‘with glancing helmet’; the word is almost exclusively used to refer to Hector [38 times throughout Iliad as a whole referring to Hector, and once to Ares ]

The spear itself is notable for its size: eleven cubits would be about 16 feet 6 inches, or 503 centimeters.

The gold band fixes the spear-point to the shaft, or is at least an outer decoration, marking it as high status or special.

Are there other passages where a weapon is singled out in a similar way?

Here is another passage, which has already been discussed in the forum with reference to exhortation:

Achilles recognizes Lycaon, whom he had previously captured and ransomed, and feels as if the warriors he has previously killed can come back to fight again.

So pondered he, and abode; but the other drew nigh him, dazed, [65] eager to touch his knees, and exceeding fain of heart was he to escape from evil death and black fate. Then goodly Achilles lifted on high his long spear, eager to smite him, but Lycaon stooped and ran thereunder, and clasped his knees; and the spear passed over his back and was stayed in the ground, [70] albeit fain to glut itself with the flesh of man. Then Lycaon besought him, with the one hand clasping his knees while with the other he held the sharp spear, and would not let it go
(Iliad 21 64–73, Murray) 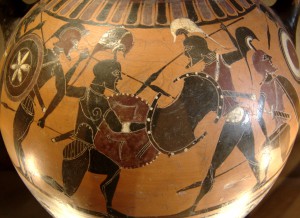 The passage is alliterative, too.

What other passages might suggest animation of a weapon?

The bow of Pandaros has its own micro-narrative backstory:

[105] Straightway he uncovered his polished bow of the horn of a wild ibex, that himself on a time had smitten beneath the breast as it came forth from a rock, he lying in wait the while in a place of ambush, and had struck it in the chest, so that it fell backward in a cleft of the rock. From its head the horns grew to a length of sixteen palms; [110] these the worker in horn had wrought and fitted together, and smoothed all with care, and set thereon a tip of gold. This bow he bent, leaning it against the ground, and laid it carefully down; and his goodly comrades held their shields before him, lest the warrior sons of the Achaeans should leap to their feet [115] or ever Menelaus, the warlike son of Atreus, was smitten. Then opened he the lid of his quiver, and took forth an arrow, a feathered arrow that had never been shot, freighted with dark pains; and forthwith he fitted the bitter arrow to the string, and made a vow to Apollo, the wolf-born god, famed for his bow, [120] that he would sacrifice a glorious hecatomb of firstling lambs, when he should come to his home, the city of sacred Zeleia. And he drew the bow, clutching at once the notched arrow and the string of ox’s sinew: the string he brought to his breast and to the bow the iron arrow-head. But when he had drawn the great bow into a round, [125] the bow twanged and the great bowstring sang aloud, and the keen arrow leapt, eager to wing its way amid the throng.
(Iliad 4 105–120, Murray) 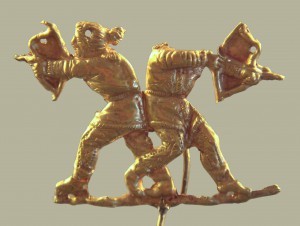 Pandaros has a very personal relationship with the bow, having fashioned it himself from the horn of an ibex that he had shot, and so had once been a living being itself. Like Hector’s spear, it is a large weapon; the horn was sixteen palms long, about 48 inches or 122cm. It, too, has a gold tip, marking it out as a special weapon.

The description of the bowstring’s sound is noted in Autenrieth’s dictionary (available on Perseus): “ἴαχεν [ἰάχω] = cry loud and sharply, shriek, scream; of applause, the cry of battle, of wounded men…..; transferred to inanimate objects, the ‘twanging’ of the bow-string; the ‘blare’ of the trumpet; ‘hissing’ of hot iron in water; ‘crackling’ of fire; but the Eng. words do not involve a personification like the Greek. ”

And once in flight, the arrow, like Achilles’ spear, desires earnestly to hit someone.

Again the weapon comes across as animate, and the micro-narrative gives it its own moment of kleos.

Where else does a weapon have a history, a micro-narrative of its own? What does that story tell us about the weapon, or its owner, or the situation in which it is being used?

Join me in the forum to discuss these and other weapons!